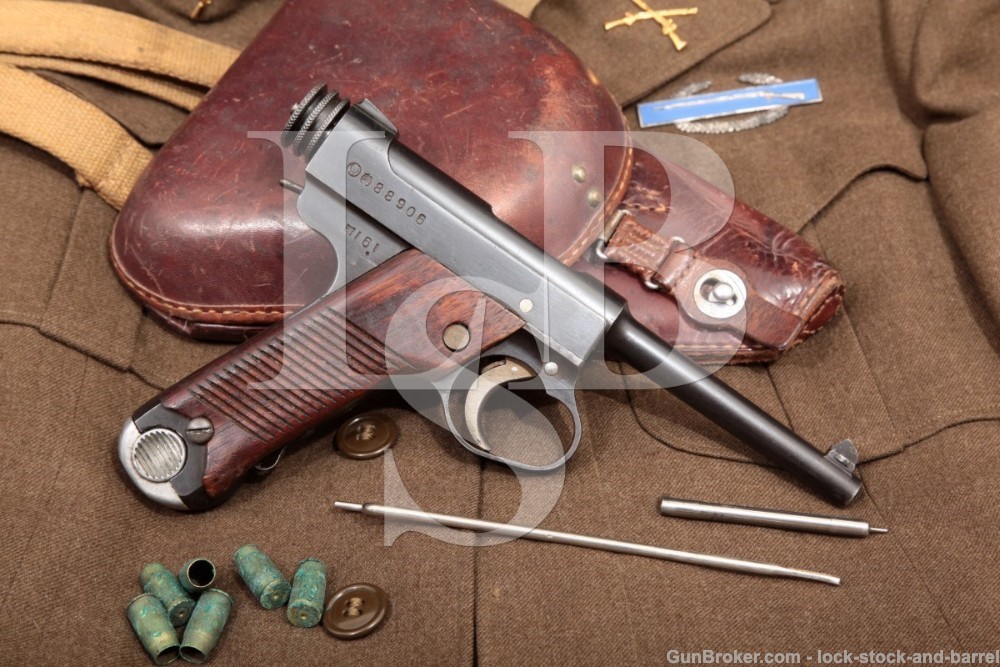 Markings: The left side of the frame has 4 Japanese characters (model designation) with squared corners as produced at Toriimatsu. The right side of the frame has a Nagoya Arsenal upside down “8” in a circle, followed by the Japanese character for “NAM” (for Lt. Gen Kijiro Nambu, one of the founders of the Nambu Rifle Manufacturing Company, the predecessor to Chuo Kogyo.). This is followed by the serial number “88906”. Below these marks on the frame are the Japanese character for “Showa” followed by the date code “16.1” and another Japanese symbol, which was a final inspection mark. The inside surfaces of both grip panels are stamped “N”. The top of the bolt in front of the cocking knob and the front face of the cocking knob are marked “906”. The left side of the trigger is marked “906” and “N”.

Sights / Optics: The front sight is a blade dovetailed into a slightly raised base on the barrel which appears as an inverted “V” when viewed from the rear. The rear sight is a square groove milled into a raised boss on the back of the frame.

Stock Configuration & Condition: The grips are slab sided bamboo with horizontal serrations. There are small dings and drag lines around the holes for the magazine release in each grip, a few dings in the front edge of the left grip, a ding at the bottom of the right grip and several dings between the groove of the serrations. The edges of the grooves are sharp. The grips rate is about Excellent overall condition.

Type of Finish: The pistol is blued. The trigger and safety have a straw colored finish.

Overall Condition: This handgun retains about 98% of its metal finish. There is light thinning on the front edge of the barrel and the edges of the frame, with thinning on the right frame rail and a narrow strip of thinning on the trigger guard. There are light handling marks sprinkled over the surfaces and marks through the finish in the left side of the frame from the safety, which shows finish loss on its outside surface.  The cocking knob knurling is sharp. The magazine release knurling is sharp but shows thinning. The grip screws are distressed and the markings are crisp. Overall, this handgun rates in about Excellent condition.

Mechanics: The action functions correctly. The receiver is tight to the frame. We did not fire this handgun. As with all used firearms, a thorough cleaning may be necessary to meet your maintenance standards.

Box, Paperwork & Accessories: The pistol comes with tin plated magazine with an aluminum bottom piece, a clamshell holster with belt, striker, cleaning rod and 7 fired shell casings, and a US shirt and jacket from WWII. The lower spine of the magazine is marked “906” and “N”. The magazine shows minimal wear with a few small spots of thinning. The bottom piece shows a few tiny dings in the outside edges of the grasping knobs which otherwise show sharp serrations. The magazine is in about Fine condition. The holster is a JMCH Type VI leather holster with an ammo pouch and striker pouch sewn to the outside of the holster under the clamshell, a loop on the inside of the holster for the cleaning rod, and spring-loaded leather closure strap with a round nickel-plated closure. The clamshell is connected to the back of the holster with a brown leather hinge. There is a single wide belt loop and nickel-plated square “D” rings sewn to the back of the holster. The inside of the clamshell is marked “6”, a Nagoya arsenal upside down 8 in a circle, “6” and three Japanese characters. The closure strap is intact, there are no cracks in the leather hinge and all of the stitching appears intact. There are light handling marks scattered over the holster with thinning in the finish at the muzzle and the edges of the clamshell. The holster is in about Fine Plus overall condition. The fired cartridge cases are green with Verdigris. The striker has small Japanese characters on the sides of the “flag” at the back of the striker. There are a few spots of extremely light erosion in the striker, which is in about Fine Plus condition. The cleaning rod is bent at one end for a handle and has a slot at the other for a patch. The rod is in Excellent condition. There is a strap attached to the holster that appears to be a sling for a Type 99 rifle. The sling is OD green nylon with a large black pained “D” ring for adjusting overall length. The strap is held with two steel hooks: please see our pictures for more detail. There are Japanese characters on the sling, which shows light dirt/oil staining and is in about Fine condition. The jacket is an olive drab wool serge waist length “IKE” jacket size 36R and the shirt is an olive drab wool shirt with shoulder straps size 15/32. The jacket has gold oak leaves (Major) on the shoulders, “U.S.” and crossed rifles infantry insignia on both lapels and a blue and gold Combat Infantry Badge (awarded to U.S Army infantry engaged in active ground combat) above the left pocket. The inside collar of both shirt and jacket are marked “GRIFF” (Major Griff was the officer who brought back the pistol after the war according to our consignor.). The shirt has a Major’s insignia on the right collar and a crossed-rifles infantry insignia on the left. Bolt the jacket and shirt are in Excellent condition with no obvious wear or stains.

Our Assessment: This is a Nambu Type 14 pistol made by the Chuo Kogyo Co. (branch of the Nagoya arsenal) in Jan. 1941 (Original Series). The Type 14 was built between 1925 and 1945 for the armed forces, and almost all of the Japanese pistols and revolvers used unique cartridges. The 8mm Nambu is a bottleneck cartridge that pushes a 102 gr. bullet at a little over 900 fps. and has approximately the same power as a .380 ACP cartridge. The pistol has its original finish and the serial numbers on the metal parts are all matching, including the magazine. The pistol is in about Excellent condition with about 98% of its finish remaining.  The bore is bright with sharp rifling and no erosion. The pistol includes a leather clamshell holster with striker, a Type 99 rifle sling formed into a belt, and a U.S. Army officers “IKE” jacket and shirt complete with insignia and the CIB, marked with the name of the officer who brought back this pistol from the war. This is a fantastic find for the collector of WWII or Japanese weapons. Not that many Japanese pistols survived the war, and those that did were often in poor condition or have been refinished. Every once in awhile we see a bringback in great condition and with matching numbers like this one, along with the holster, jacket and shirt, that will form a great package for the discerning collector.