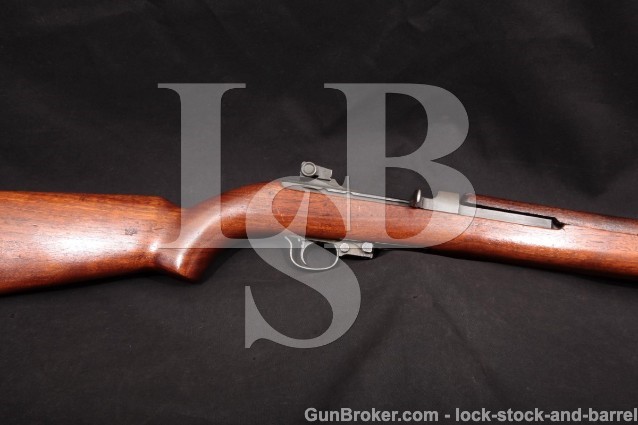 Stock Configuration & Condition: The hardwood stock has a pistol grip, barrel band with sling loop, sling well, sling pass through, and metal butt plate. The buttplate shows scrapes & dings along the edge. The wood shows several scrapes & scratches; most are small. A few of these marks are deep and have damaged small portions of the surface wood. These marks have been oiled over. The LOP measures 13 1/8 inches from the front of the trigger to the back of the buttplate. The stock rates in about Very Good Plus to Fine overall condition.

Overall Condition: This rifle retains about 96% of its metal finish. The right side of the receiver and the top of the op rod each show thinning consistent with cycling. The top rear of the receiver shows a few small scratches. The remaining metal shows some light scrapes & handling marks. The screw heads show some use. Most of the markings are deep. The heel of the receiver has markings that are well defined. Overall, this rifle rates in about Very Good Plus condition.

Box, Paperwork & Accessories: There is no magazine.

Our Assessment: This Rare “all matching” IBM M1 Carbine was made in early 1944. The rifle is in nice shape for a WWII M1. It has a ton of Nice IBM markings on the receiver, barrel, stock, and small parts. Collectors prefer IBM M1 Carbines over more common M1 Carbines. This one is ideal for a collector as it has all IBM part codes.