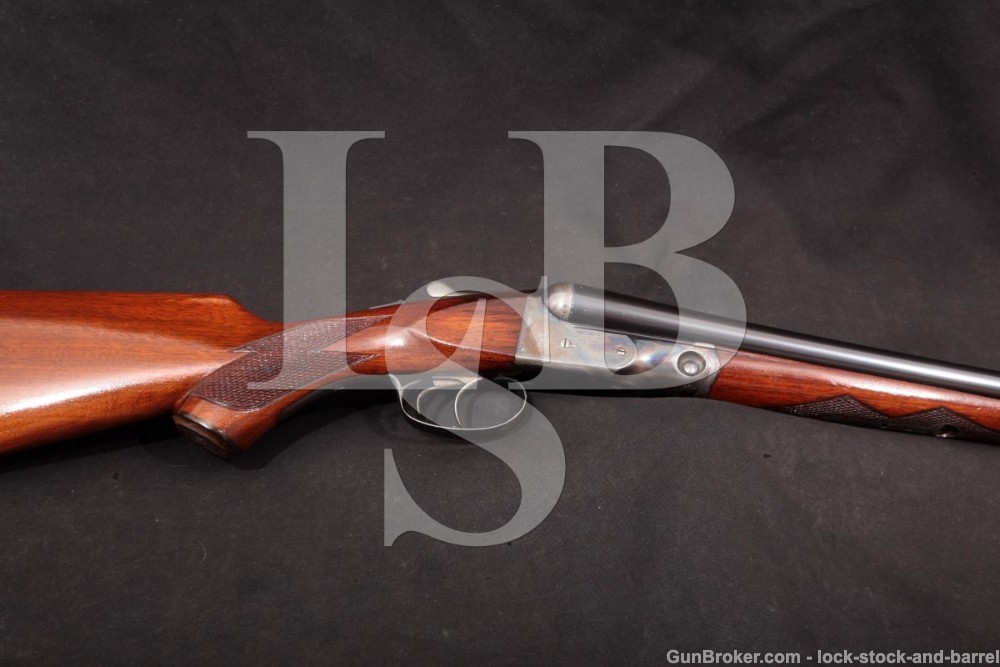 Gauge: 16 Gauge, this shotgun would originally have had a 2 1/2” chamber, it appears to have been lengthened for use with modern 2 3/4″ shells.

Action Type: Side by Side, Double Non-Selective Trigger Shotgun with Extractor

Barrel Length: 27”, with solid, concave rib with wavy lines. The wavy line engraving stops just short of the muzzle at a line across the rib. The barrels just meet at the muzzle.

Choke: The barrels are Full (L) and Modified (R) choke, both fixed.

Sights / Optics: This shotgun is mounted with a brass bead set into the front of the concave solid rib.

Stock Configuration & Condition: The stocks are a two piece checkered walnut set with splinter forend with steel tip, capped pistol grip, and checkered black hard rubber buttplate. The forend’s left edge is rounded at the front as from a smoothed-out chip loss, the right edge is fairly sharp at the same location. There is a small repaired chip-loss at the toe and thinning finish at the heel. There is some discoloration from age and oil at the front of the forend. Otherwise, there are only a few scattered minor marks. The checkering is well defined. Drop at comb is 1 1/2”, drop at heel is 3 1/8?, the cast is about neutral. The LOP measures 13 7/8? from the front of the front trigger and 13? from the front of the rear trigger to the back of the plate. The plate has light wear with a spot of light marring at the toe but with well defined checkering and lettering and good definition on the dog’s head, in about Very Good-plus condition. The stocks rate in about Very Good-Fine overall condition. Apart from the left forend edge and the toe, the wood appears original.

Bore Condition: The bores are bright. There is no erosion in the bores. There is a dent in the top of the left barrel about 5″ from the muzzle.

Overall Condition: This shotgun retains about 93% of its metal finish. The finish is thinning lightly at some edges. The forend latch and guard have handling wear. There are a few scattered light scratches and scuffs. The left barrel has a dent in the top about 5″ from the muzzle. The screw heads are sharp. The markings are clear. Overall, this shotgun is in about Good-Very Good condition and would rate Very Good-plus but for the dent in the barrel.

Mechanics: The action functions correctly. The shotgun features dual non-selective triggers and an extractor; the tang mounted safety returns to ‘safe’ when the action is opened. The shotgun has no play in the frame to barrel fit. We have not fired this shotgun. As with all used firearms, a thorough cleaning may be necessary to meet your maintenance standards.

Our Assessment: This Parker Brothers VH Grade Hammerless comes to us from 1928. The VH or Vulcan Grade was a “knockabout” gun produced by Parker which still had the same quality in manufacture and attention to detail of their higher grade, and higher priced, offerings. The Trojan would be introduced in 1913 to compete with lower priced options from other manufacturers, but the Vulcan would stick around for those who were willing to pay for quality but also wanted to actually take their guns into the field. The gun has correct barrel length and no special features, according to Parker’s records. Gun has minor finish wear, a couple of small repairs in the stocks, and a dent in the left barrel. Otherwise, it looks as though it could have been made last year rather than nearly a century ago. This shotgun is a beauty and would make a great addition to any collection, especialy an avid bird hunter or Parker collector. Please see our photos and good luck!