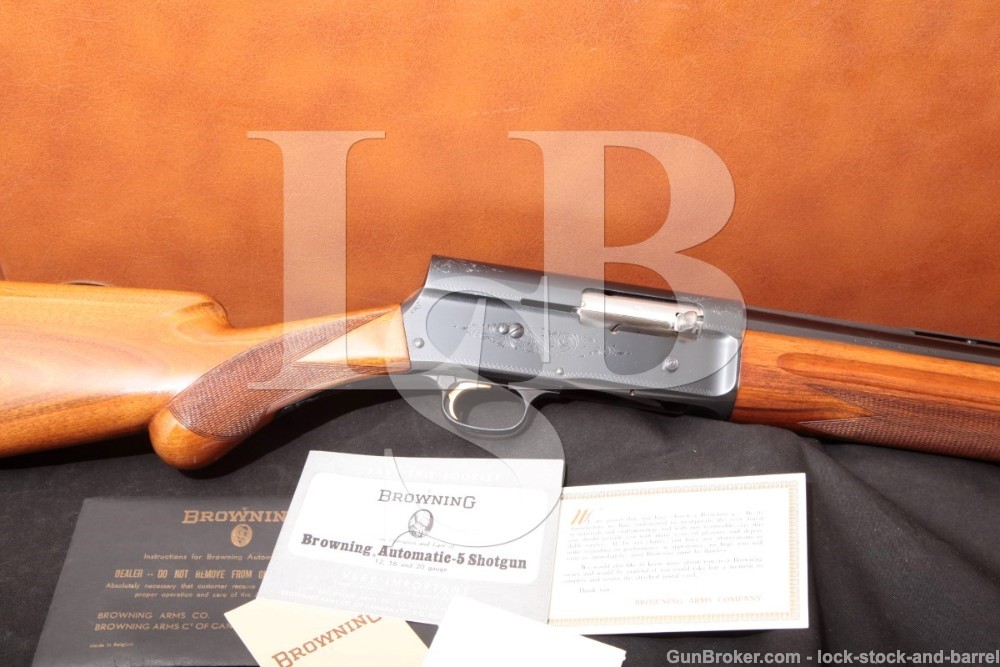 Stock Configuration & Condition: The stocks are a gloss-finished two-piece checkered wood set with a round-bottom pistol grip, finger grooves running the length of the forend, and a black hard rubber Browning buttplate. The forend has several scattered light compressions and handling marks, thinning finish in some areas. The most noticeable are on the top-right edge towards the front and on the bottom just behind the mag tube cap. The buttstock has some light compressions, some can be seen on the bottom of the round grip, bottom edge of the butt, and left side at the rear. The checkering is intact and attractive with light handling wear. The LOP measures 14 3/8″ from the front of the trigger to the back of the buttplate. The plate has some light impact marks and scrapes, but no chips or cracks. The stocks rate in about Fine Plus-Excellent overall condition.

Overall Condition: This shotgun retains about 98% of its metal finish. The receiver has faint thinning on edges, most noticeable on the edges of the humpback. There are some faint thin scuffs on the receiver, so faint they are only observable when the light hits just right. The most noticeable are located at the rear of the left side and at the rear of the top. There are a few light marks on the barrel. The rib has a few spots of soft thinning and a few tiny nicks on the edges. The screw heads are mostly sharp with a few showing faint use. The markings are clear. Overall, this shotgun rates in about Excellent condition.

Box, Paperwork & Accessories: Included is a Naugahyde Browning case, manual, Browning registration paper, Naugahyde informational pamphlet, black Browning envelope that holds all the paperwork, and two keys. The case has some scuffs that have left some discoloration mainly on the bottom and scrapes nad impact marks to the reinforced edges. There is a little scrape that has revealed the material under the Naugahyde and a little tear in the shape of an “L”, it is about 3/4″x1/2″. The beige felt liner of the case has some compressed portions from storage, but they are light to moderate. The felt has some discoloration from contact with the rear of the barrel which likely was set into the case with a light film of oil. The case rates in about Fine condition.

Our Assessment: The Browning Automatic 5, most often referred to as Auto-5 or simply A-5, is a recoil-operated semi-automatic shotgun designed by John Browning. The Browning Auto-5 was the first mass-produced semi-automatic shotgun. Designed by John Browning in 1898 and patented in 1900, it was produced continually for almost 100 years by several makers with production ending in 1998. It features a distinctive high rear end, earning it the nickname “Humpback”. Browning presented his design to Winchester, where he had sold his rifle designs, but they refused his terms. He then went to Remington, but the president of the company died while he was waiting to offer them the gun. Browning then took the gun to FN in Europe and was so confident of his design that his first order was for 10,000 shotguns. The design was later licensed to Remington for their Model 11 and to Savage Arms for their Models 720 and 755. During WWII, production of the Auto-5 was moved to Remington alongside the Model 11 until FN could resume production after the war. This Auto-5 Light Twelve was built by FN in 1963 with Grade I engraving on the receiver. It is chambered for 12 GA. 2 3/4” shells and has a 29 1/2” barrel with Full choke and a full-length ventilated rib. This shotgun shows wear consistent with sitting in its included Browning case the majority of its days and has a bright bore paired with strong mechanics. This is a well-made shotgun in beautiful shape and in its current condition with its included accessories would make a nice addition to a Browning collection. Please see our photos and good luck!