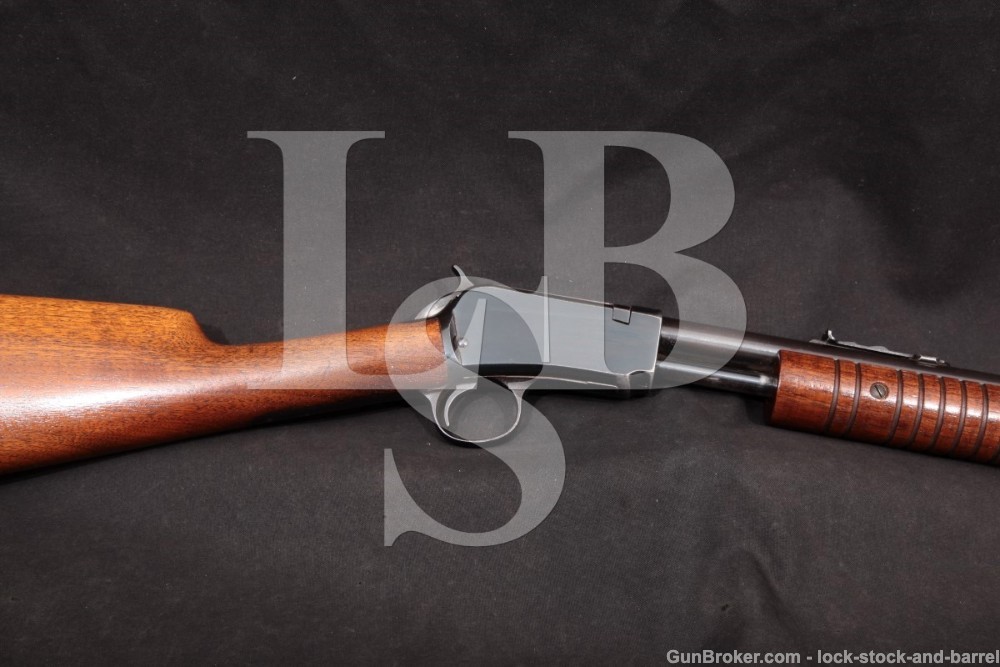 Markings: The left side of the barrel is marked “MADE IN U.S.A. WINCHESTER REPEATING ARMS CO. /  NEW HAVEN, CONN.”, “MODEL 62A / .22 S. L. OR L.R.” and “WINCHESTER / TRDE MARK”. The underside front of the receiver and the lower tang are marked with the serial number. There are ovalled “WP” proof mark at the top rear of the barrel and the top of the receiver’s chamber ring.

Stock Configuration & Condition: The stocks are two-piece walnut with a lacquered finish. The buttstock has a straight grip with a black checkered hard rubber buttplate marked with a circled “WINCHESTER / REPEATING /ARMS CO” logo. The forend is round with a flat bottom and 17 grooves on each side. There is very light oil staining around the back of the receiver and the lower tang. There are several light handling marks with a few light drag lines and scratches in the buttstock. There are dings at the front of the forend on both sides, with several dings in the underside of the forend and several shallow dings scattered over the remainder of the forend. The edges of the forend grooves show light wear. The wood to metal fit is excellent, but we suspect the forend is not original to the rifle. The LOP measures 13 ¼” from the front of the trigger to the back of the buttplate. The buttplate shows light wear at the heel and toe and light wear in the checkering. The buttplate is in about Fine condition. The stocks rates in about Fine overall condition.

Bore Condition: The bore is bright with sharp but shallow rifling. There is no erosion in the bore.

Mechanics: The action functions correctly and smoothly and the action locks up solidly. The hammer has a quarter-cock safety position. We did not fire this rifle. As with all used firearms, a thorough cleaning may be necessary to meet your maintenance requirements.

Our Assessment: Ever since 1890 when Winchester brought out a slide-action rifle with that year’s model number, the Model 1890 pretty much ruled the roost for rimfire repeaters, also known as gallery guns. This tubular-magazine rimfire was wildly popular not only in the plethora of shooting galleries that were across the U.S. but in the hands of young boys and men who loved to shoot and hunt small game. The Model 1890 was a John Browning design and the first successful repeating rimfire rifle. Sixteen years later an almost identical rifle sans the expensive-to-manufacture octagon barrel and crescent buttplate was introduced as the Model 1906. Both models continued to be produced until 1932, when they were replaced by a more modern Model 62. The Model 62 rifles proved extremely popular over the years, not so much for their accuracy as their looks. Their flat-sided receivers were dead flat and the round barrels were round and without ripples. The wood to metal fit was outstanding. The craftsmanship and work ethic that went into the guns was valuable to the shooters at the time, and this value remains to this day with the collectors. This Model 62A rifle was made in 1941, and is in about Very Good to Fine condition with 85% of its metal finish remaining. The bore is bright with sharp rifling and no erosion. This rifle is in nice enough condition to be of interest to Winchester collectors. It will also be of interest to anyone wanting a nice, light rifle for plinking and small game hunting. The ability of this rifle to feed and chamber .22 Short ammo will be of interest to those living in semi-rural areas who don’t want to upset their neighbors with the sharp crack of .22 LR ammo.