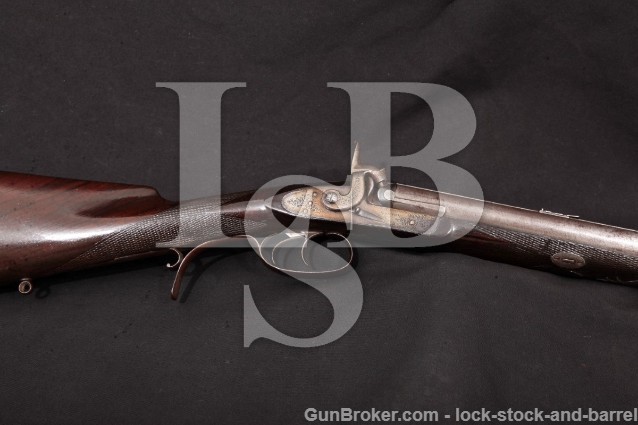 SOLD FOR: $1,825.00
LSB#: 190402LH51
Make: Joseph Manton
Model: Double Rifle
Serial Number: We suspect that the rifle was not originally serialized, but “WR31011” has been marked on the bottom of each barrel.
Year of Manufacture: Ca. 1820s
Caliber: 25 Gauge (.585″)
Action Type: Side-by-Side Muzzle-Loading Percussion Double Rifle With Safeties
Markings: The top of the barrel rib is marked “MANTON LONDON” and each lockplate is marked “MANTON”. The bottom of each barrel has British proof marks, “25” twice and “WR31011”.
Barrel Length: 24″
Sights / Optics: The front sight is a blade dovetailed to the front of the rib. The rear sight has a fixed “V”-notch with three progressively taller folding “V” notches marked “200”, “300” and “400” in a base dovetailed to the rear of the rib.
Stock Configuration & Condition: The stock is a one-piece checkered walnut with steel nosecap, straight wrist with curved guard, initial plate and sling eyelet mounted in the belly (there is another eyelet mounted to the forward ferrule) and a smooth steel buttplate. The forend has a few small losses along the top edges, there are several scattered light compressions, scuffs, bruises nicks and dings. The wood is quite dark, with some of the color likely from oil and handling. The checkering is generally well defined with more wear in the forend than the wrist. The forend is cracked though at the lug. It has been mended to prevent further chipping and damage (no wood filler), please see the pictures. The LOP measures 14 1/4″ and 13 1/4″ from the fronts of the triggers to the back of the buttplate. The plate has a light patina with a patch of more notable oxidation in the center and light wear. Overall, the stocks are in about Fair condition as Antique considering the crack.
Type of Finish: Bright, Damascus Barrels
Finish Originality: We don’t see any signs of refinishing.
Bore Condition: The bores are semi-bright with surprisingly sharp and strong rifling. There is some light erosion scattered in the bores.
Overall Condition: Originally the barrel wedge lug was free of the barrels and held in place by the ramrod which caused the stock to crack. The lug is now being held in place by a cold weld and this is no longer an issue. The barrels show scattered spots of discoloration from oxidation and the lockplates have some dark patina at their fronts with much lighter patina behind. The strike-faces of the hammers have erosion. The guard has a thick, dark patina. There are a few scattered light scuffs, nicks and dings. The markings are clear. Overall, this rifle rates in about Fair condition as Antique given the crack in the forend.
Mechanics: The action functions correctly. The nipples are intact, though they should be cleaned as they currently appear blocked. Each lock has a safety lever which can be engaged only when the hammer is at half-cock. We have not fired this rifle. As with all used firearms, a thorough cleaning may be necessary to meet your maintenance standards.
Box, Paperwork & Accessories: This rifle comes with an unfinished steel ramrod with a tapered tip. The rod has scattered surface oxidation. Overall, the rod is in about Good condition.
Our Assessment: Joseph Manton was a British gunsmith who innovated sport shooting, improved weapon quality and paved the way for the modern artillery shell. Manton was a sport shooter in his own right and a friend of Colonel Peter Hawker. From 1781 onwards, he produced about 100 weapons annually, including dueling pistols and shotguns. In the early 19th Century, he invented the tube or pill lock, an improvement over Alexander Forsyth’s scent-bottle lock, but although readily adopted at the time, it was quickly overshadowed by the invention of the percussion cap. Manton’s weapons remain some of the most highly sought-after designs of the flintlock age and can fetch more at auction than Holland & Holland’s shotguns. His workforce included James Purdey (who went on to found Purdey’s), Thomas Boss, William Greener, and Charles Lancaster. This is a 25 bore percussion double rifle made by Manton sometime between the invention of the percussion cap and his closing of business in 1826. The rifle’s wedge lug has been repaired with a cold weld and the stock mended to prevent any further cracking or damage. We find this to be a great item for display or a nice project this winter for a gunsmith.  Please see our photos and good luck!
CA Legal or CA Private Party Transferable: This antique rifle can be transferred in California.