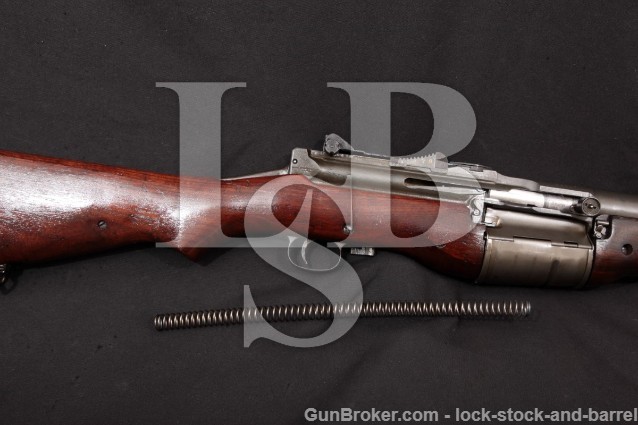 SOLD FOR: $5,026.00
LSB#: 190709RR02
Make: Johnson Automatics
Model: 1941
Serial Number: B3247
Year of Manufacture: 1941-1945
Caliber: .30-06 Springfield
Action Type: Semi Automatic, 10 Round Internal Rotary Magazine
Markings: The top of the receiver is marked with patent information, the serial number “B3247”, “CAL. 30-’06 SEMI AUTO.” and “ “JOHNSON AUTOMATICS” / MODEL OF 1941 / MADE IN PROVIDENCE, R.I., U.S.A.”. The right rear of the receiver is marked “CRANSTON / ARMS / CO” in an inverted “triangle” with a small “star” above it. The “triangle” was a Dutch National symbol and the small “star” is a Dutch acceptance mark (page 251 of Bruce Canfield’s book, Johnson Rifles and Machine Guns). The side of the bolt is marked “B2902”. Johnson made no attempt at the factory to use matching part numbers (page 251). The face of the barrel collar is marked “.30-06” on top and “41” on the bottom. The side of the barrel collar is marked with a “circled M”. The top of the barrel shank is marked “J.A. / .30-‘06”. The bottom of the barrel shank is marked “8 85 4 H”, “J” and with a “circle” containing “O sword I”.
Barrel Length: Approximately 22 Inches
Sights / Optics: The front sight is a bladed post set between two protective ears. The rear sight is a windage adjustable aperture. The adjustment knob functions. The aperture is set on sliding riser that is marked “M2” on the left. It is marked “METERS 0-1000” and “1 3 5 7 9” on the right.
Stock Configuration & Condition: The stock has not been refurbished. The sections of inletted laminated wood to the rear of the rotary magazine were added at the factory. This was done to stocks made from thin wood blanks. Stocks made from thicker blanks will not have the laminated sections added. Laminated stocks are the most common Johnson stocks found on M1941 Rifles. For more see page 252 of Bruce Canfield’s book, Johnson Rifles and Machine Guns.
The 2 piece oil stained hardwood stock has a pistol grip, several holes for mounting screws, channel under the forearm for the takedown lever, 2 sling loops and a metal buttplate. The hole on the right front of the forearm is a takedown button. It can be pressed with the tip of a bullet to release the barrel takedown lever that is on the bottom front of the forearm. The buttplate shows light scrapes. The wood shows scrapes & scratches. A few are deep and have damaged small portions of the surface wood.  These marks have been oiled over. The LOP measures 13 1/4 inches from the front of the trigger to the back of the buttplate. The stock rates in about Very Good Plus to Fine overall condition.
Type of Finish: Parkerized
Finish Originality: Original
Bore Condition: The bore is bright; semi bright near the muzzle. The rifling is sharp. There is no erosion. The bore shows an M.E. of 0.5.
Overall Condition: This rifle retains about 96% of its metal finish. The barrel shank shows some thinning consistent with cycling. The magazine shows some scrapes & discoloration. The metal shows various small scrapes & light handling marks. The screw heads show use. The markings are deep. Overall, this rifle rates in about Fine condition.
Mechanics: The action functions correctly. We have not fired this rifle. As with all previously owned firearms, a thorough cleaning may be necessary to meet your maintenance standards.
Box, Paperwork& Accessories: The rifle comes with an extra recoil spring that is in about Fine condition.
Our Assessment: This Rare Johnson Automatics Model 1941 is in Nice shape for a WWII era Military Rifle. It is over 70 years old and still has deep & crisp markings on the metal. The stampings on the metal parts tell a story about the rifle. They include a Dutch acceptance mark. The metal finish looks great, the stock is in nice shape, and the bore is still strong & bright. A limited number of these rifles were used by American troops during WWII and are prized by collectors.
If you are wondering how a rare Dutch Military Rifle is still in such nice shape; we may have the answer.
The following information can be found (with much more detail) on pages 73 to 87 and pages 216 to 223 of Bruce Canfield’s book, Johnson Rifles and Machine Guns: In July of 1940 the Netherlands (Dutch) placed an initial contract for 10,200 Johnson Model 1941 Rifles. At the time Johnson Automatics did not have the production capabilities to fulfill the contract. Johnson had to develop partnerships to fulfill production of the rifles. Johnson partnered with the Universal Winding Company of Cranston, Rhode Island to form the Cranston Arms Co.; hence the Cranston Arms Co. “triangle” stamping on all Model 1941 Rifles. The “triangle” was a Dutch National symbol… Johnson Automatics went bankrupt in 1949. Many of the left over Johnson Automatics spare parts and barrels were purchased by an importer who was also able to acquire surplus military M1941 Rifles that had been sold to the Dutch. The Johnson Automatics spare parts & barrels were used to put the surplus Dutch Johnson M1941 Rifles into working order. These rifles were then offered to the public by mail order from the late 1950’s into the late 1960’s. Many were offered in “as is” Military configuration while others where “Sporterized”. The Sporterized rifles featured new barrels made by the Apex Rifle Company of Sun Valley, CA.
This Rare collectible rifle will add nicely to a Military collection. Good luck.
CA Legal or CA Private Party Transferable: This C&R eligible rifle can be transferred in California. All C&R and modern firearms must be DROSd. This section does not apply to out of state residents.