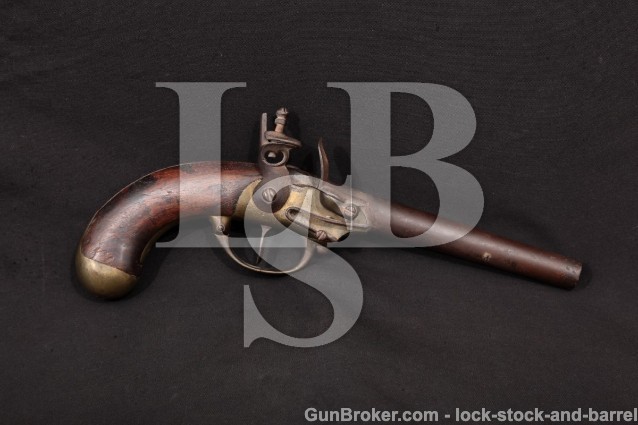 SOLD FOR: $1,308.00
LSB#: 190212HW20
Make: Manufacture d’Armes de Saint-Etienne (MAS), France
Model: Mle 1777 Cavalry Pistol
Serial Number: NSN
Year of Manufacture: 1788-89
Caliber: 17.1mm (.67 Cal)
Action Type: Single Shot Muzzleloader with Flintlock Action
Markings: The right side of the frame under the hammer is marked “St. Etienne” in script. The left rear shoulder of the barrel is marked with what looks like “CO”, but which is probably a date code “88” or “89”.
Barrel Length: The barrel is 7 ¼” in length.
Sights / Optics: There are no provisions for sights other than sighting over the top of the barrel.
Stock Configuration & Condition: The grip is smooth walnut with a large bag shaped handle. The top strap is steel and runs all the way down the backstrap to the large round brass grip cap which is screwed to the grip. The front strap is cast brass, integral with the frame, and runs to within 5/16” of the grip cap. It is possible or even probable that there was once a forend installed on the underside of the barrel, held with a barrel band, as there is a hole in the front of the frame on the right side for a ramrod. The grip shows several spots of dark oil staining, along with several bruises and dings. There are shallow gouge or scrape marks on the sides of the grip just above the grip cap. There is a bruise on the left inside edge at the lower tang and the wood is shy of the metal along the lower left edge of the receiver(above trigger). There are no cracks or chips noted. The grip is in about Very Good overall condition.
Type of Finish: The barrel and upper tang are covered with a thick plum colored patina and the frame, lower tang, grip cap and trigger guard have developed a mustard colored patina.
Finish Originality: There are no indications that the pistol has ever been refinished.
Bore Condition: The bore is dark and smoothbore. There is moderate to heavy erosion in the bore.
Overall Condition: This handgun retains about 0% of its metal finish. The barrel and backstrap have a dark plum colored patina mottled with dark spots of moderate erosion with a few spots of heavier erosion near the muzzle. There are a few dings in the trigger guard, a short but deep drag line in the lower tang and a few dings and tool marks in the grip cap. The screw heads are disfigured. The barrel markings are two worn to read but the marking on the right side of the frame is clear. Overall, this handgun rates in about Fair to Good overall condition.
Mechanics: The action functions correctly. The hammer has a half-cock safety position. The trigger is rather stiff. We did not fire this handgun. As with all used firearms, a thorough cleaning may be necessary to meet your maintenance requirements.
Box, Paperwork & Accessories: None
Our Assessment: Though not as well known today as it was in the 18th century, the French Mle. 1777 was a significant pistol in early American history, being supplied in large numbers to the American Revolutionaries during the War of Independence and being adapted by Simeon North to produce America’s first standard martial pistol, the Model 1799. About 145,000 of these pistols were produced and, while they were intended for use by cavalry and issued in pairs, they found there way all across the world. This example looks pretty good for a 230 year old military pistol and looks to have seen its fair share of history. The ramrod is missing, but this is common with the Mle 1777. The soldiers who used it quickly found the included ramrod useless and would frequently discard it, preferring to use their cleaning sticks in its place. This example may have made its journey across the pond during the American Revolutionary War and may have even seen use during the conflict. This ought to bring the interest of Revolutionary War collectors as well as collectors of 18th Century European martial arms. Please see our photos and good luck!
CA Legal or CA Private Party Transferable: This Antique Flintlock handgun CAN be transferred/sold in California.