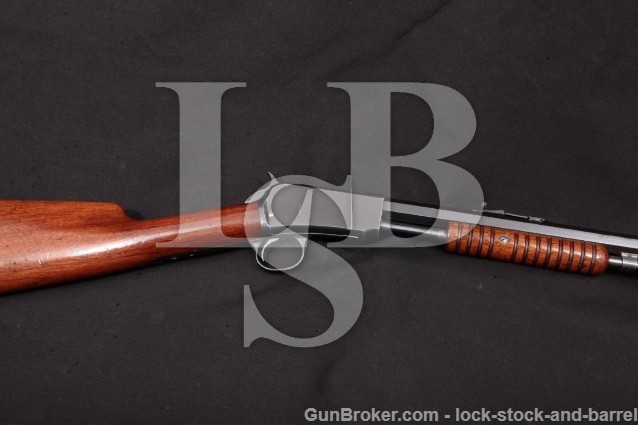 Caliber: .22 Long
Action Type: Pump Action with Takedown Frame Fed by ¾” Length Magazine Tube
Markings: The top of the barrel is marked “MANUFACTURED BY THE WINCHESTER REPEATING ARMS CO. / NEW HAVEN, CONN. U.S.A. PATENTED JUNE 26.88.DEC. 6.92.”, “-MOD. 1890-“, and at the receiver with “22 LONG”. The upper tang is marked “WINCHESTER / TRADE MARK”. The lower tang and the front underside of the receiver are marked with the serial number.
Barrel Length: The octagon barrel is 24” in length.
Sights / Optics: The front sight is a silver bead dovetailed into the top of the barrel. The left top surface of the base of the sight is marked “PAT / NOV.4.1902”. The rear sight is a “U” notched flat topped elevator sight that is dovetailed into the top of the barrel. The base of the sight is marked with a circled “R” as though it was viewed through a scope with fine crosshairs, which we believe to be a Redfield logo. The upper tang is drilled, tapped and filled for a tang sight.
Stock Configuration & Condition: The stocks are two-piece walnut with a lacquer finish. The forend is round with 12 grooves and the buttstock has a straight grip with a crescent shaped blued steel buttplate. There is light oil staining behind the receiver and in the grooves of the forend. There are a few dings and several drag lines in the buttstock. The forend shows only a few tiny dings and drag lines, with very light wear in the edges of the grooves. The LOP measures 13 1/8” from the front of the trigger to the back of the buttplate. The buttplate shows surface loss and light wear at the edges of the heel and toe, and a few light scratches and spots of light erosion in the remainder. The buttplate is in about Fine condition. The stocks rate in about Fine overall condition.
Type of Finish: The rifle is blued.
Finish Originality: The finish is original.
Bore Condition: The bore is mostly bright, tending to gray at the muzzle. The rifling is sharp. There is no erosion in the bore.
Overall Condition: This rifle retains about 90% of its metal finish. There are spots of pinprick surface erosion scattered over the barrel, with most in the front section in front of the magazine tube, and a spot each on the upper left and right shoulders of the receiver. There is thinning on the edges of the barrel and the receiver, and on the lower shoulders of the barrel and the magazine tube where the forend rubs. There are a few light handling marks scattered over the surfaces with a drag line in the right side of the receiver. The edges of the barrel are relatively sharp. The knurling on the magazine tube rod shows very light wear and the hammer knurling shows light wear. The serrations in the takedown knob show light wear. The screw heads are sharp and the markings are crisp. Overall, this rifle rates in about Fine condition.
Mechanics: The action functions correctly. The hammer has a quarter-cock safety position. We have not fired this rifle. As with all used firearms, a thorough cleaning may be necessary to meet your maintenance standards.
Box, Paperwork & Accessories: None
Our Assessment: The Winchester Model 1890 pump action rifle was designed by John Browning in the late 1880’s, patented in 1888 and renamed the Model 90 in about 1919. Winchester had asked Browning to design the rifle as a replacement for the rimfire versions of the Model 1873, which had never achieved great popularity. It proved to be the most successful repeating rim fire rifle for general all around shooting ever made by Winchester. For many years, the Model 1890, when chambered in .22 Short, was considered to be the standard for use in shooting galleries, hence its nickname of “Gallery Gun”. This rifle is a 2nd Model 1890 chambered in .22 Long. It is in about Fine condition with about 90% of its original finish remaining. The bore is mostly bright with sharp rifling and no erosion. The rifle has some honest wear, but the action still locks up tight. The Model 1890 rifles are all collectable, and in its nice condition with original finish, we expect this 2nd Model 1890 to be a big hit with the collectors.
CA Legal or CA Private Party Transferable: This C&R eligible rifle CAN be transferred in California. All cartridge firing firearms (even C&R’s and antiques) sold to a California resident must be DROS’d. This section does not apply to out of state residents.