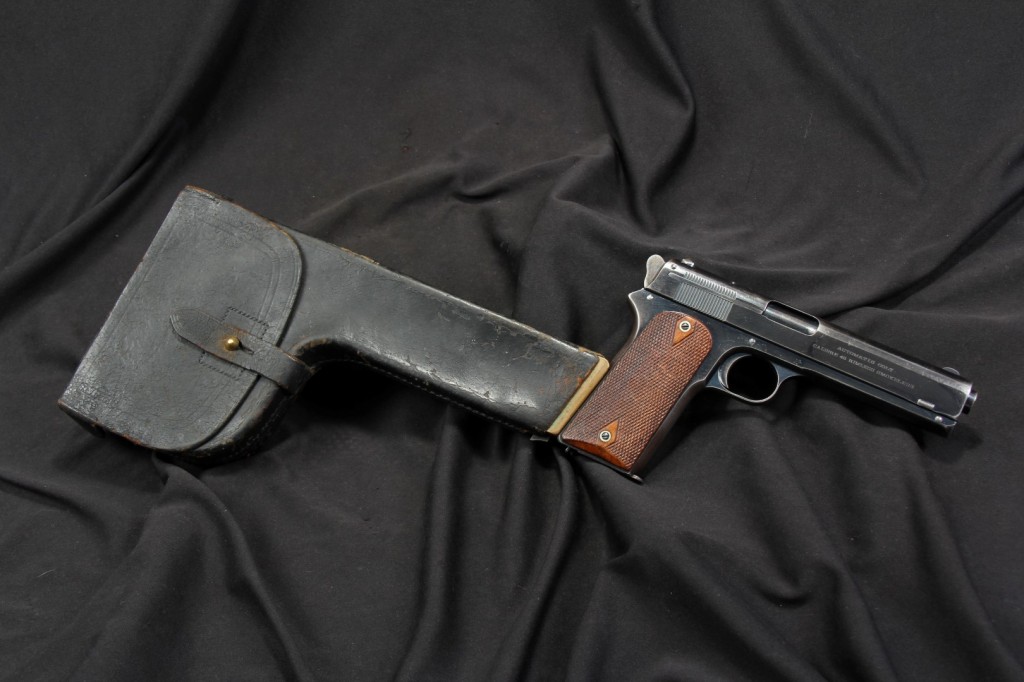 In 1905, Colt introduced an automatic pistol in cal. .45 Rimless. It was the .45 Colt Automatic Pistol, Military Model, or more commonly, the Mode of 1905. In its 1906 catalog, Colt boldly proclaimed this: “The Most Powerful Small Arm Ever Invented.” Early M1905s closely resembled the .38 cal. Military and Sporting Models which preceded it. No newly patented mechanisms appear to have been used in the first production models of the M1905. Its most distinctive feature was the .45 cartridge it fired. A number of changes were soon added to the pistol; these included an enlarged ejection port, occasional additions of a lanyard loop, and even attachable shoulder stocks. The most visible regular production change came in 1908 with the substitution of a new spur-type hammer for the old rounded burr hammer, a change that was incorporated in all Colt’s visible hammer, semi-automatic pistols. While this is sometimes referred to as the M1908, the pistol is the same except for the hammer spur.

The M1905 barrel is connected to the receiver by two swinging links, one at the muzzle, the other at the breech. This tandem barrel linkage accounts for much of the potential accuracy of the M1905. It shoots consistently because the barrel is attached to receiver at both ends, and moves like a parallel rule. The paired toggle links of the M1905 cause the barrel to swing back and down in recoil, unlocking the barrel and slide. When the slide of the M1905 returns to battery, the two links guide the barrel back to virtually the same position it had assumed in the previous firing. It was this pistol, in a special military contract version, that was first submitted to compete for adoption as the U.S. Army’s official sidearm. In the course of the Army Ordnance tests from 1907 to 1911, this revolutionary handgun was itself revolutionized.

The final product, which was adopted by the government as the Model 1911, looks markedly different from the original M1905 and, more importantly, has several functional differences. The major difference is that the M1911 barrel is connected to the receiver by only one swinging link at the breech end. During recoil, this link draws the breech end of the barrel down, unlocking it from the slide. The muzzle end of the barrel is supported by a sliding fit in a bushing at the forward end of the slide. Other differences include the addition of an external safety, a grip safety, a different slide stop, and a magazine release button. The safety features of the M1905 are not immediately noticeable. Indeed, upon first examination, the pistol appears to lack any safety device. The manual thumb safety found on M1911 pistols is not present on the M1905; nor is there a grip safety (except on some models used for military experimentation). Still, the pistol has two significant safety mechanisms which enable one to carry the M1905 ready for service and, if desired, loaded with a cartridge in the chamber.” (NRAmuseum.com)

This is a Fine example in original condition, even retaining the original leather shoulder stock.