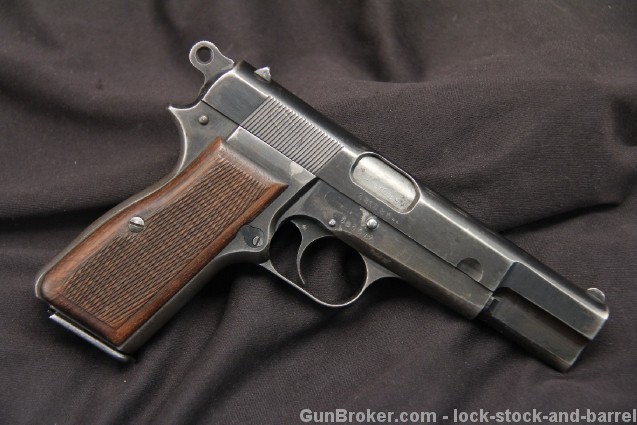 Make: Fabrique National
Model: Hi-Power Waffenampt Proofed Type III
Serial Number: 181586
Year of Manufacture: 1942-1945
Caliber: 9mm Parabellum
Action Type: Single Action Semi-Auto with Removable Magazine
Markings: The left side of the slide is marked “Fabrique National D/Armes De Guerre / Herstal, Belgique”, “Browning’s Patent Depose”, “WaA140”, and an “Eagle”. The left side of the frame is marked “WaA140” and with an “Eagle”. The front left side of the trigger guard is marked “MP”. The barrel is marked with an “Eagle” and “181566”. The right side of the slide and frame are marked “181566”. The bottom of the frame next to the magazine well is marked “2”, “v”, “L”, an upside down “3” and two other marks. There is a Waffenampt stamp on the magazine that appears to be an Eagle over “WaA140”, plus a “7.5” in a square.
Barrel Length: 4 ¾”
Sights / Optics: The gun is mounted with a rear sight dovetailed into the slide and a blade front sight.
Stock Configuration & Condition: The grips are checkered walnut. They are darkened with handling and the checkering is worn on both panels. The grips rate in about Very Good overall condition.
Type of Finish: Blue
Finish Originality: All Original
Bore Condition: The bore is bright and the rifling is sharp. There is no erosion.
Overall Condition: This pistol retains about 75% of its metal finish. There is wear at the muzzle, and on the edges of the slide, frame, and trigger guard. The sides of the barrel and slide show thinning and frosting, with spots of pinprick surface erosion on the right side of the frame. The trigger guard, and the front and back of the grip show thinning. The backstrap also shows the beginning of a brown patina with small spots of pinprick surface erosion. The hammer, slide release and safety all show finish wear but the serrations are not disfigured. The screw heads are disfigured. The markings are clear. Overall, this pistol rates in about Good condition.
Mechanics: This pistol has a crisp single action trigger pull. The action functions correctly. We have not fired this pistol.
Box, Paperwork & Accessories: This pistol comes with one 13 round magazine. It is blue with a steel follower, and has rough finishing marks from the factory. It has little wear and is in Fine condition. It has Waffenampt marks as indicating in “Markings”.
Our Assessment: FN commissioned John Browning to design a new military sidearm conforming to this specification. Browning had previously sold the rights to his successful M1911 U.S. Army automatic pistol to Colt’s Patent Firearms, and was therefore forced to design an entirely new pistol while working around the M1911 patents. Browning built two different prototypes for the project in Utah and filed the patent for this pistol in the United States on June 28, 1923 and granted on February 22, 1927.[5][6] One was a simple blowback design, while the other was operated with a locked-breech recoil system. Both prototypes utilized the new staggered magazine design (by designer Dieudonné Saive) to increase capacity without unduly increasing the pistol’s grip size or magazine length. By 1931, the Hi-Power design incorporated a shortened 13-round magazine, a curved rear grip strap, and a barrel bushing that was integral to the slide assembly. By 1934, the Hi-Power design was complete and ready to be produced. It was first adopted by Belgium for military service in 1935 as the Browning P-35. Ultimately, France decided not to adopt the pistol, instead selecting the conceptually similar but lower-capacity Modèle 1935 pistol. Though many governments, the world wide and for decades have used this fantastic arm as a primary sidearm. Second in our books only to the 1911…