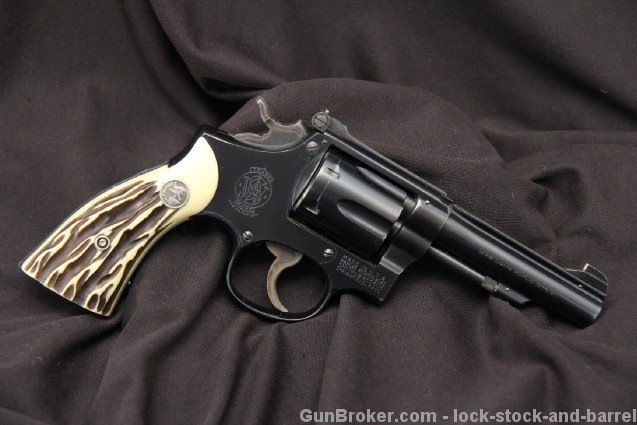 Make: Smith & Wesson
Model: Model K-22 Masterpiece, the ‘Pre-Model 17’
Serial Number: K75101
Year of Manufacture: 1949
Caliber: .22 Long Rifle
Action Type: Single and Double Action Swing Out Cylinder Revolver
Markings: The left side of the barrel is marked “SMITH & WESSON” and the right side of the barrel is marked “22 LONG RIFLE CTG”. The barrel flat is marked “R K75101”. The rear face of the cylinder and the backside of the extractor star are both marked “75101”. The yoke cut is marked “9 / X / 89150” and the yoke is marked “89150”. There is a “4” on the left side of the grip frame and “K75101” is marked on the underside of the grip frame. There is an “L”, a “6” and a sideways “7” on the right side of the grip frame. There is a large S&W logo on the right side plate and the “Marcas Registradas” address on the right side of the frame.
Barrel Length: 4”
Sights / Optics: The revolver is mounted with a pinned Patridge style front sight that has had its rear face painted white. There is a S&W micrometer click adjustable rear sight.
Stock Configuration & Condition: The Franzite grips are plastic, imitation stag. There are no chips or cracks in either grip panel. The grips rate in about Excellent overall condition.
Type of Finish: Blue
Finish Originality: All Original
Bore Condition: The bore is bright and the rifling is sharp. There is no erosion.
Overall Condition: This revolver retains about 95% of its metal finish. There are drag marks on the cylinder and a few of the leading edges on the barrel and frame show finish wear. The hammer and trigger are nicely case colored. The screw heads are sharp and show no signs of being turned. The markings are clear. Overall, this gun rates in about Excellent condition.
Mechanics: The single and double actions function correctly. This is a Square Butt, K Frame with a pinned tapered barrel and recessed cylinder. The hammer is checkered and .375” wide and the trigger is serrated and .265” wide and engages an over travel stop. It has the old 6 groove front and back straps. We have not fired this revolver.
Box, Paperwork & Accessories: None
Our Assessment: Mike Cruimpton has beautifully described the history and elegance of this fine and important revolver better than we could…(http://www.gunblast.com/Cumpston_K22s.htm):

“From 1910 onward Smith and Wesson Hand Ejector revolvers came in target variations equipped with adjustable sights. Rimfire revolvers built on the .32 frame were considered heavyweights and the first serious effort toward a .22 built on the 38 (K) frame did not come about until 1931. The high velocity .22 long rifle cartridge had become popular and the company advertised the new K-22 “Outdoorsman” as being specifically designed for the high speed round.

It was marketed to hunters and outdoorsmen in a climate that could not have been less ideal. The Great Depression was in full swing and there was a serious effort to include handguns in the prohibitive tax and registration structure of the Federal Firearms act of 1932 and 34. Nevertheless the K 22 was an immediate success with well-heeled sportsmen as well as police and military training programs. Supica –Standard Catalog of Smith and Wesson records that an Army team took several K 22s to the 1932 Olympics providing an early launch into the mainstream target circuit. By 1940, shooters or agencies had bought 19,500 of the first model and a second model was in the catalogues as “A replica of that favorite, the .38 M&P Target Revolver” (Stoeger-Shooter’s Bible). By this time, it had become the K 22 ‘Masterpiece’ and was firmly identified with organized target shooting. Wartime rationing stopped production in 1941 with something over 1,000 units of the second models out the door.

Post-War production resumed in 1946 with the K-22 becoming part of a target set including the K-38 and the redesigned, Post-War K-32. The revolver assumed the profile that would define the Smith Hand Ejectors until 1989. Variations abound and generally follow the evolution of the Smith Hand Ejectors as a family. The defining theme of the K 22 target revolvers and the current 617s is the intent of their purchasers to have the best of all possible rimfire revolvers.

There is a long- standing tradition that regards each model variation as a poor imitation of its immediate predecessor. In the case of the K-22, this occurred each time the side plate or frame shed another screw, in 1957 when the model names gave way to the number system and in the late 20th Century when the classic ribbed barrels disappeared in favor of the heavy under-lugs. Throughout history, it has been just possible to acquire a substandard K-22 and there have been periods when workmanship really suffered. There were legitimate complaints about quality control during the Vietnam War Era. In the ‘70s, many revolvers felt like a handful of gravel had been trapped under the side plate. In the main though, the K-22 by any name and from any decade, provides its own justification for pride of ownership.”

This Pre-Model 17 S&W revolver is truly in Excellent condition for a gun over 50 years old. This is a beautiful old revolver that the whole family can enjoy, whether plinking or target shooting.