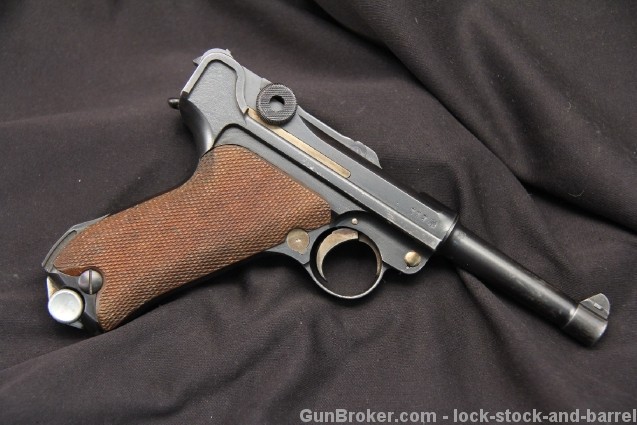 Make: Simson & Co. Suhl
Model: 1934
Serial Number: 7069
Year of Manufacture: Circa 1934
Caliber: 9mm
Action Type: Toggle Action Removable Magazine
Markings: The bottom of the barrel, left side of the barrel slide, frame, and magazine are marked “7069”. The takedown lever, extractor, toggle, back of toggle, sideplate and both safety pieces are marked “69”. The right side of the barrel shows three eagle over “6” proofs and a spread eagle proof. The magazine is also marked with a script “a” (?) and an eagle over “63”. The top of the toggle is marked “Simson & Co / Suhl”, the extractor is also marked “69” and has an eagle over “6” proof. The barrel’s underside is marked with the serial number and “8,82”. There are many other proofs: on the sideplate, the left side of the toggle, the right side of the trigger, the right side of the magazine release, two on the barrel, on the extractor and the top of the toggle. There are no marks on the inside of the grip panels.
Barrel Length: 4”
Sights / Optics: This pistol is mounted with standard military sights; a front blade in a dovetail slot and a rear notch in the toggle.
Stock Configuration & Condition: The grips are checkered walnut. The checkering is a little smooth from compression marks. There are no chips or cracks. The grips rate in about Very Good overall condition.
Type of Finish: Blue
Finish Originality: Original
Bore Condition: The bore is mostly bright and the rifling is sharp and deep. There is light erosion in the grooves and a little fouling. This is a good shootable bore.
Overall Condition: This pistol retains about 85% of its metal finish. The takedown lever, trigger, back of magazine catch, and safety bar are straw colored. The is light edge wear around the trigger guard. The muzzle shows wear all around, and mild surface erosion about 1” back from the crown around the barrel. There is a nick/small dent in the side plate. The retaining pin for the takedown lever shows finish loss on the frame just ahead of the trigger guard. The Screw heads are sharp. The markings are clear. Overall, this pistol rates in about Very good condition.
Mechanics: The action functions correctly. We did not fire this pistol.
Box, Paperwork & Accessories: None
Our Assessment: Simson is an interesting and inmportant Luger, http://en.wikipedia.org/wiki/Simson_(company): “In 1854 the brothers Löb and Moses Simson bought one third of a steelhammer works in Suhl (Germany). The production of carbon steel began and the firm Simson & Co. was founded in 1856. The factory produced guns and gun barrels in the years following.

In 1871 the first steam engine started its service and the enterprise established production of bicycles in 1896, which was followed by the start of automobile production in 1907. The Simson Supra racing car is famous.

During World War I, Simson produced Mauser Gewehr 98 rifles for the German Army. In the aftermath of the war and the Treaty of Versailles, the reorganizedReichswehr was allowed to buy new handguns from only one company, so as to limit the ability of the German arms industry to recover. Larger manufacturers such as DWM were passed over in favor of Simson precisely because of its lower production capacity, and as such Simson was the sole producer of military-contract Luger pistols from 1925 to 1934.[2] Simson made about 12,000 Lugers in this period.[3] Simson also was responsible for repairing and refurbishing existing firearms of the Reichswehr, though DWM was employed in the capacity as well, in contravention of the Treaty of Versailles. In addition to Lugers, Simson also repaired and refurbished Gewehr 98 and Karabiner 98b rifles, MG08 machine guns and MP18 submachine guns.

In the 1920s Simson also produced .25 ACP Westentaschenpistolen (“vest pocket pistols”), for commercial sale. Until 1989 this was Simson’s only venture into commercial handgun production. These pistols were available in two almost identical models, the first known as Model 1 in German and Model 1922 in the United States, and the second as Model 2 in Germany and Model 1927 in the US.

In 1924 completely revised its range of cars and gave them the Simson-Supra name. The hand-built models starting at that time and designed by Paul Henze were particularly noteworthy.[6] The first Supra models were the S and the S Sport, which had a four-cylinder, two litre, long-stroke, DOHC engine. The S produced 50 bhp and had a 120 km/h (75 mph) top speed; the S Sport produced 60–80 bhp giving it a top speed of more than 140 km/h (87 mph). In 1925 a SOHC So version was introduced that produced 40 bhp and had a top speed of only 100 km/h (62 mph) The S and S Sport were discontinued in 1926; So production continued until 1929.

In 1925 Simson introduced its first six-cylinder car, the model J. Its SOHC, 3.1 litre engine produced 60 bhp, giving it a 95 km/h (59 mph) top speed. In 1926 this was succeeded by the model R, which produced similar performance with an OHV pushrod engine.

In 1931 the model J was succeeded by the model RJ, in which the six-cylinder engine had a larger bore giving it 3.3 litres displacement and 70 bhp. In the same year Simson introduced the first and only eight-cylinder Supra, the model A. Its engine shared the RJ’s long-stroke dimensions of 79.5 x 115 mm, giving it 4.7 litres displacement. This produced 90 bhp and gave a 120 km/h (75 mph) top speed. Models RJ and A were produced until 1934.

Hitler’s government forced the Jewish family Simson to flee the country in 1936. Under the dispossession of Jewish industrialists a trustee took control of the firm, and so by merger with other factories the Berlin Suhler Waffen- und Fahrzeugwerke (BSW) was formed. In the same year the factory produced its first motorcycle, the BSW 98, which had a 98 cc engine and two-speed transmission. Critics of the Nazi government suggested a different meaning for the BSW initials: Bis Simson Wiederkommt (“until Simson returns”).

After the Simson brothers were exiled the factory increased weapons production. From 1939 the company was called Gustloff-Werke – Waffenwerk Suhl, named after assassinated Swiss Nazi Wilhelm Gustloff, and had subsidiaries such as the Otto Eberhardt Patronenfabrik (“Otto Eberhardt Cartridge Factory”). As well as the main works in Suhl, the Gustloff-Werke had branch factories at Greiz in Thuringia and at Lódz in Nazi-occupied Poland. Sachs-engined motorcycles from 47 cc to 123 cc were made within the Gustloff group from about 1934 until about 1940.

In 1946, by order of the Soviet Military Administration in Germany the manufacturing plant was partially dismantled and transported to the Soviet Union (USSR) as part of the Soviet reparations programme for the damage inflicted on the USSR by Germany during the Second World War. In 1947 the factory was integrated into the Soviet Sowjetische Aktiensgesellschaft Awtowelo (SAG Awtowelo or “Soviet Avtovelo Company Limited”). ???????? or Avtovelo is a Russian portmanteau word derived from ?????????? (avtomobil = “car”) and ????????? (velociped = “bicycle”). It was adopted because initially all production was for export to the USSR.”

This Luger is apparently the “1934 Simpson” model. There is no “S” on the toggle but the full name “Simson & CO / Suhl” is spelled out. Simson was a contract manufacturer to the German Army during the re-arming beginning in 1934. Simson lost the future contract to Mauser. There were only about 10,000 Simson manufactured Lugers and a serial number in the 7000 range is appropriate for it. Please see page 185 of “Luger Variations”, by H.E. Jones for more details. This is a rare collectable and shootable Luger.