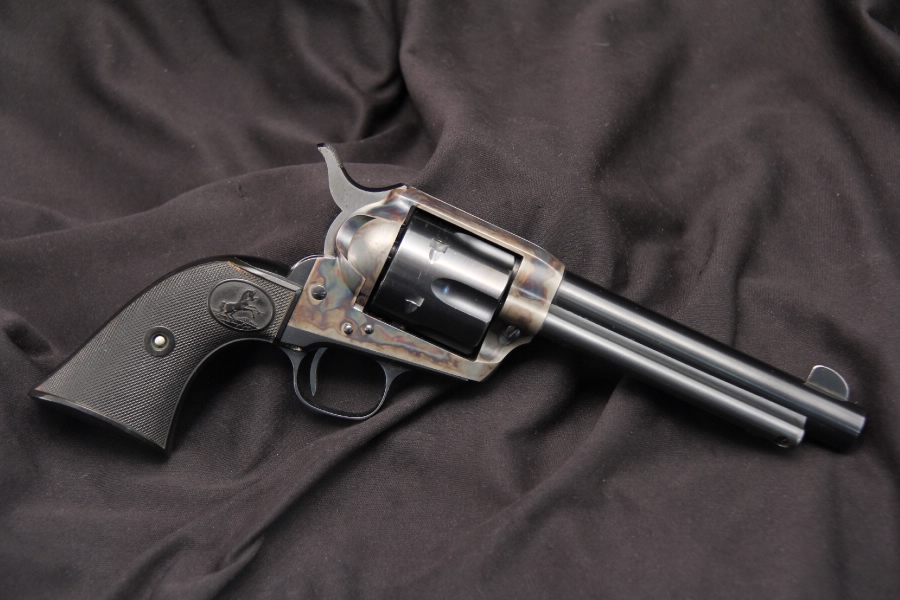 Make: Colt
Model: Frontier Six Shooter
Serial Number: 355611
Year of Manufacture: 1937
Caliber: .44-40, .44 WCF
Action Type: Single Action Revolver
Markings: The left side of the barrel is marked “Colt Frontier Six Shooter .44-40”. The top of the barrel is marked “Colt’s Pt. F. A. Mfg. Co. Hartford, Ct. U.S.A.”. The left side of the frame is marked “Pat. Sept. 19, 1871 / July 2. 72 Jan. 19, 75”, with the rampant Colt logo. The underside of the frame is marked “355611”. The inside of the loading gate is marked “360” (this number is not supposed to match the serial number). The left side of both the upper and lower grip frame are marked “355611”. The inside of the right grip is marked “355611”m as is the left. The left side of the trigger guard is marked with a “4” and the VP.
Barrel Length: 5 1/2″
Sights / Optics: The gun is mounted with standard fixed SAA sights.
Stock Configuration & Condition: The grips are original checkered hard rubber with Rampant logos at the tops. The fit is very good and the checkering is still pronounced, though worn. There are other scattered marks, but no cracks or losses. The grips rate in about Excellent overall condition.
Type of Finish: Blue & Case Color Hardened
Finish Originality: Factory Original
Bore Condition: The bore is bright and the rifling is sharp. There is no pitting or erosion in the bore.
Overall Condition: This gun retains about 92% of its metal finish. There are some marks on the back of the hammer and the top of the back strap. The grip straps show very slight thinning and very scattered surface frosting. The case colors are still very much present, with a bit of dulling and very scattered surface frosting. There are some bolt marks on the cylinder and a light drag line. The barrel and ejector rod housing show little wear and only some light thinning at the muzzle. The vast majority of the original finish remains on this gun. The forward most trigger guard screw hole shows some marring from a screwdriver. The screw heads are a bit worn, showing more wear than would be expected given the balance of the gun. The markings are crisp. Overall, this gun rates in about Excellent condition.
Mechanics: The action functions very well. The springs are strong and the timing is very good. There is only a hair of cylinder wobble when locked up.
Box, Paperwork & Accessories: None
Our Assessment: The Colt Frontier or Frontier Six-Shooter was a Colt 1873 “Model P” revolver, manufactured in .44-40 Winchester caliber instead of .45 Colt (in which configuration it was called the Single Action Army), so as to be cross-compatible with Winchester Model 73 ammunition. Production began 1877. Colt Frontier Six-Shooter was the actual name of the Colt pistol model, and this was acid-etched on the left side of the barrel. After 1889, the legend was roll-stamped until 1919, when the caliber designation “.44-40” was added. In the last half of the 19th Century it was very common for an individual to own a long gun (rifle or carbine) and a revolver. The users of the .44-40 Winchester cartridge in the Far West appreciated the convenience of being able to carry a single caliber of ammunition which they could fire in both revolver and rifle. The Colt Frontier Six Shooter Revolver and the Winchester Model 1873 or the Winchester Model 1892 in .44-40 (.44 WCF) caliber were one of the most common combinations seen in “the Old West”.

This is an important variant of Colt revolvers, necessary to any SAA collection. This one is about the best one we have seen come up for sale, suitable for any level of collecting, and likely the best Frontier Six Shooter you’ll be able to buy this decade.