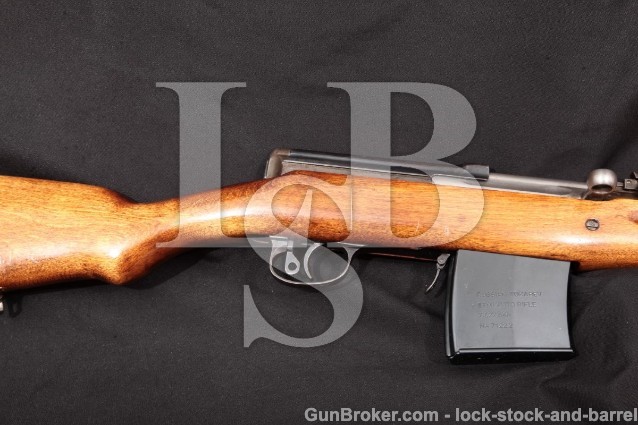 Serial Number: H275. The first letter is a Russian character (a backwards N) so it is not included in the serial number.

Barrel Length: Approximately 26 3/4 inches to the end of the muzzle device.

Sights / Optics: The front sight is a hooded post. The rear sight is a “U” notch blade assembly attached to a sliding escalator that is marked from “1 – 15”. Both sides of the receiver are slotted at the rear in order to accept a scope base & optic.

Stock Configuration & Condition: The gloss finished wood stock has a pistol grip, finger grooves, ventilated handguard, ventilated metal nose caps with sling loop, hole for the included cleaning rod, through bolt, sling loop under the butt, and a metal buttplate. The metal nosecaps show scrapes, scratches & light surface erosion. The finish shows scrapes& scratches. Some of these have damaged portions of the wood finish. The LOP measures 13 1/4 inches from the front of the trigger to the back of the buttplate. The stock rates in about Very Good Plus overall condition.

Overall Condition: This rifle retains about 95% of its metal finish. The top cover has been treated with cold blue. It shows scrapes, small scratches, and a freckling of discoloration. The barrel & muzzle device show small scrapes & discoloration from oxidation. The bottom metal shows oxidation and a few scrapes. The markings are deep. Overall, this rifle rates in about Very Good Plus condition.

Mechanics: The magazine sticks and is difficult to remove. The action functions correctly. We have not fired this rifle. As with all previously owned firearms, a thorough cleaning may be necessary to meet your maintenance standards.

Box, Paperwork & Accessories: The rifle comes with a reproduction 10 round magazine. It shows small scrapes and a small area of pin prick surface erosion that has been painted. It is in about Fine condition.

Our Assessment: This Russian SVT 40 was made back in 1941 at the Izhevsk Arsenal. The rifle still looks darn impressive for a WWII era service rifle. The markings on the metal are deep and are proof of its history. This one has a nicely refinished stock. The rifle is marked with the” boxed SA” Finish Army ownership mark. This rifle was most likely captured during Russian & Finnish Continuation War (1941 – 1944). After capture it was probably used to kill lots of Russians. This will add nicely to a WWII or Military collection.
Here are some basics from Wikipedia: “The Samozaryadnaya Vintovka Tokareva, Obrazets 1940 goda (“Tokarev Self-loading Rifle, Model of 1940)…The SVT-40 saw widespread service during and after World War II. Intended to be the new service rifle of the Soviet Red Army, production was disrupted by the German invasion in 1941 resulting in a change back to the older Mosin–Nagant bolt-action rifle for the duration of WWII…The first country outside the Soviet Union to employ the SVT was Finland, which captured some 4,000 SVT-38s during the Winter War, and over 15,000 SVTs during the Continuation War. The SVT saw extensive use in Finnish hands.”

CA Legal or CA Private Party Transferable: This rifle is curio and relic eligible and can be transferred/sold in California.
NOTE: All C&R eligible and Modern Firearms must be shipped to a California FFL dealer for D.R.O.S. This does not apply to out of state buyers.