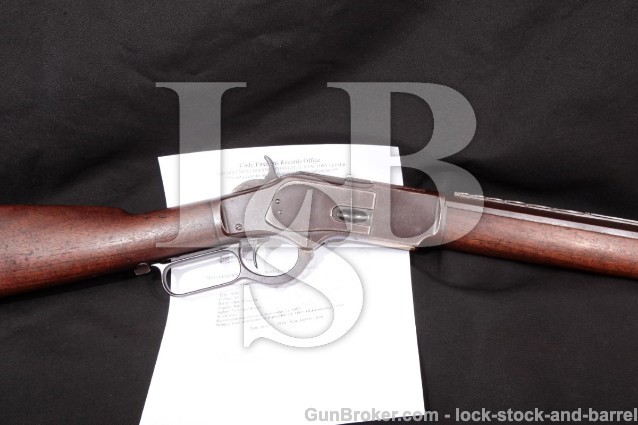 Sights / Optics: The front sight is a Beach combination sight. The blade is intact, but the globe and post portion of the sight is damaged, missing the top of the globe and post. The sight appears to have been removed and re-installed, with the blade oriented the wrong direction and the hinge-pin appearing to be a replacement. The rear sight is a six-leaf express with tangent sight (7 leaves total, including the tangent). The progressively taller leaves are marked “1” through “6” with “V”-notches and vertical sighting reference lines. The tangent sight is marked from “7” to “10”. Four of the leaves are still tight in the base, two swing freely. The cross-piece on the tangent sight slides freely on the leaf and the leaf has some play to the base, though it still has spring tension. The top tang is drilled, tapped and filled for a peep sight (none included)

Stock Configuration & Condition: The stocks are two-piece smooth walnut with capped forend, straight grip, and steel crescent buttplate with sliding storage door. There is an eyelet sling stud screwed to the belly of the buttstock, the nosecap is drilled for another stud, but it is not present. The stocks have several scattered light compressions, scratches, nicks and scuffs with a few more notable mars on the right of the buttstock. There is some light grain-line cracking at some edges, most notable at the buttplate. The wood is generally proud to the metal and well fit. The LOP measures 12 3/4″ from the front of the trigger to the back of the buttplate. The plate has little remaining finish, mostly having gone to a dark patina with wear at the heel and toe and scattered light surface erosion, in about Good condition as Antique. Overall, the stocks rate in about Good-Very Good condition as Antique.

Bore Condition: The bore is gray with well defined rifling. There is light erosion scattered through the bore with infrequent spots of light pitting.

Overall Condition: This rifle retains about 0% of its metal finish. The metal surfaces have gone to a thick, dark patina, mostly worn to white at edges with scattered spots of solid erosion, nicks, dings and scratches. The screw heads range from sharp to slightly disfigured with useable slots. The markings are legible, but worn. Overall, this rifle is in about Good-Very Good condition as Antique.

Mechanics: The action functions correctly. The firing pin protrudes from the front of the bolt properly, but has a flat face, not pointed. The hammer has a half-cock safety position, lever lock on the lower tang, and a dust cover on the receiver that slides on an integral rail typical of the Third Models. Set-trigger equipped rifles were not manufactured with lever-safeties. The trigger is set by pushing forward on the trigger while the hammer is at full-cock, providing a very light, crisp trigger pull. We have not fired this rifle. As with all used firearms, a thorough cleaning may be necessary to meet your maintenance standards.

Box, Paperwork & Accessories: This rifle comes with a records search printout from the Cody Firearms Records Office (it is noted on the printout that it does not consitute a factory letter), which indicates that their records show this rifle’s set-trigger, sights and sling stud are factory special order and were shipped installed on the rifle September 14, 1897.

Our Assessment: One of the most successful, and certainly one of the most famous Winchester rifles was the Winchester Model 1873, known as “The Gun that Won the West” for its predominant role in the hands of Western settlers. The Model 1873 had a steel frame that was much stronger than the brass framed Model 1866, allowing Winchester to develop a family of powerful new cartridges, with Colt usually producing Single Action Army revolvers in the same calibers shortly after they were developed. The .44-40 Win. cartridge, also known as the .44 WCF, was introduced by Winchester in 1873 as Winchester’s first metallic centerfire cartridge. Colt produced a single action revolver chambered for this cartridge in 1877. This Model 1873 Carbine was made in 1897 and has a 24” octagonal barrel chambered for 44-40 and a crescent buttplate with sliding-door compartment. It has a few special-order features including a set-trigger, Beach front sight and an exceedingly rare six leaf express with tangent rear sight. The 1873 was the first Winchester lever-action repeating rifle offered with a set-trigger and the feature was fairly popular. With any special-order rear sight being uncommon on an Antique Winchester, this rifle’s type is one of the most rare. The rifle is in about Good-Very Good condition with no remaining finish and scattered surface erosion, but with strong mechanics, a decent bore and correct features for a 3rd Model 1873. This would make a great addition to a Winchester or early cartridge rifle collection, especially with its special-order sights and set-trigger. Please see our photos and good luck!