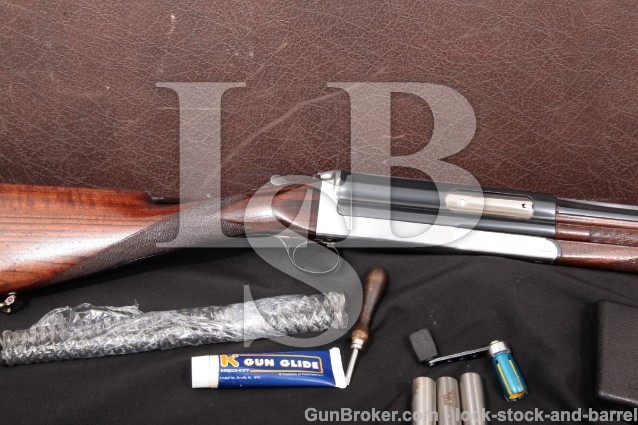 Markings: The left of the upper receiver is marked “FUCILE COSMI – BREVETTATO – TORRETTE DI ANCONA ITALIA”. The top of the barrel to the left of the rib is marked “ACCIAIO BOEHLER ANTINIT” with a six-pointed star. The serial number or portions of it are marked on the left of the recoil spring lug, bottom of the barrel extension, the bottom-rear of the upper receiver in front of the rear locking lug, the front face of the mount for the bolt-catch lug, the right face of the bolt’s operating lever, the inside of the forend, the top of the forend iron, the left shoulder of the lower receiver, the front face of the magazine tube housing, the right face of the hammer, sear and trigger, and the left face of the lifter actuator arm. It is possible that more parts are marked, but we did not completely disassemble the gun to inspect.

Sights / Optics: There is a brass bead mounted to the front of the rib. The top of the rib and the receiver are checkered to reduce glare.

Stock Configuration & Condition: The stocks are a two-piece checkered walnut set with a straight grip, straight comb, solid black rubber Kick-Eez buttpad and sling swivels mounted front and rear. The forend has a few scattered minor marks with two short, hairline cracks at the forend iron on the bottom-right and bottom-left. The buttstock has a few areas of thinning finish, some scattered light scratches and scuffs and a hairline crack in the right of the wrist which starts at the bottom tang and extends back and up, terminating just behind the checkering below the comb. The LOP measures 13 7/8″ from the front of the trigger to the back of the buttpad, 13″ to the back of the wood. The buttpad has a small loss and tear at the right edge, otherwise showing only light wear, in about Good-Very Good condition. The stocks are in about Very Good overall condition.

Bore Condition: The bore is mostly bright. There is some very light erosion in the bore, some of which may prove to be stubborn fouling after a patient cleaning.

Overall Condition: This shotgun retains about 87% of its metal finish. The barrel has scattered light wear, nicks and scuffs, mostly forward of the forend, with lines of operational wear on the bottom from the forend. The edges of the rib have thinning finish and a few minor nicks. The upper receiver has a few scattered light scratches and minor marks in its otherwise strong finish. The lower receiver has scattered light scuffs and minor marks, most not through the finish though there is a nick on the right at the top edge which appears to be through the chrome. The trigger guard has thinning at edges. The controls show light handling wear. The screw heads are sharp, the markings are clear. Overall, this shotgun is in about Very Good condition.

Mechanics: The action functions correctly, though when operated manually is a little stiff. The included additional recoil springs and friction collet may improve this. The top lever allows the upper receiver and barrel assembly to pivot away from the lower receiver. The lower receiver houses the fire control group, lifter assembly, bolt recoil spring assembly and the magazine tube housing with the tube continuing back into the buttstock. The upper receiver houses the barrel and bolt assemblies with the bolt having a release lever on the bottom allowing it to be unlocked and manually moved. As this long-recoil shotgun is not safe to manually charge with the action closed, the proper means of loading is to load the magazine tube, then place one round in the chamber and push the bolt forward to lock, then close the action. There is a tang-mounted safety and a bolt release on the left of the lower receiver. We have not fired this shotgun. As with all used firearms, a thorough cleaning may be necessary to meet your maintenance standards.

Our Assessment: There are rare shotguns, there are hand-made shotguns, there are innovative, intricately designed shotguns, shotguns with designs which appear to be ahead of their time, and then there’s the Cosmi. Unbelievably, this gun’s design started in 1925 with production commencing in 1930 and continuing to this day. Rodolfo Cosmi Sr. was a carpenter in the small town of Montefeltro, born in the 1870s. Not particularly wealthy, but brimming with ingenuity, Cosmi decided that he would make his own shotgun using scrap parts and the handle of an umbrella; remarkably, it worked. This would be the first step in his journey to making one of the most fascinating shotguns in the world. Dissatisfied with the operation of other semi-automatic shotgun designs, Cosmi decided he would adapt the long-recoil operation of the Browning Auto-5, but with the magazine extending back into the buttstock, providing a more consistent balance with less weight in front of the receiver while still allowing for greater capacity. To this day, the Cosmi shotguns are still hand-fit, each gun painstakingly crafted to function flawlessly, and the company is still in the family with Rodolfo Cosmi Jr. serving as the third generation of Cosmi to take up the craft. With fewer than 10,000 produced since 1930, this shotgun is not only beautiful, not only intriguing, not only hand-crafted, it is quite rare, and this example is in quite good condition for a field gun made some 75 years ago. Visually, one would never expect that this shotgun was made the better part of a century ago! This example is in Very Good condition and comes with a case, Briley chokes and extra recoil springs and a friction collet to adjust the gun to your preferred load. With this gun’s unique design, it is well worth the time to take a look through our photos get an idea of the ingenious operation of this fantastic gun. Good luck in your bidding!