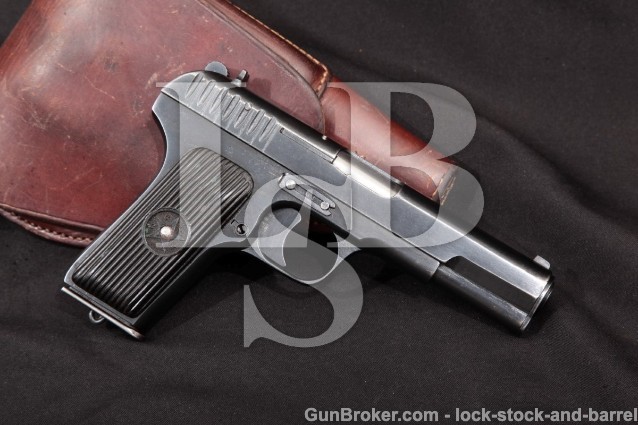 Stock Configuration & Condition: The grips are black serrated plastic with a five-pointed star in the center of each grip. The lower rear corner of the left grip is cut-out for a lanyard ring. The grips have light handling wear and a few scattered minor compressions. There are no chips or cracks. Overall, the grips are in about Fine condition.

Overall Condition: This handgun retains about 92% of its current metal finish. The finish is thinning at most edges. There is light finish wear at the front of the slide on each side, faint handling wear in the backstrap and some scattered minor marks. There are infrequent spots of very light surface erosion under the finish and a few scratches, nicks and dings under the finish. The controls show light handling and operational wear. The markings are clear. Overall, this pistol is in about Very Good-plus condition as refinished.

Mechanics: The action functions correctly. The slide has almost no play to the frame. The trigger has a smooth takeup followed by a crisp break. We did not fire this handgun. As with all used firearms, a thorough cleaning may be necessary to meet your maintenance standards.

Box, Paperwork & Accessories: This pistol comes with a brown leather flap holster and a single 8-round magazine. The holster has storage for two magazines under the flap (only the one magazine is included). The holster shows scattered light wear and scuffing, wrinkles in the top of the flap and the stitching on the back of the flap has about half broken at the front. The other stitching is intact. Overall, the holster is in about Good condition. The magazine has light-moderate operational wear with intact feed lips and a strong spring, in about Very Good condition.

Our Assessment: First introduced in 1930, the Tokarev was developed as a replacement for the Nagant 1895 revolver as the sidearm for the Red Army. The design borrowed heavily from the 1911, with a similar tilting barrel, bushing and single-stack magazine. Some small changes were made to simplify manufacturing resulting in the TT-33. The Tokarev would be replaced by the Makarov after the war, but as was common with soviet weapons its design was distributed to various other communist nations with a variant still in use today in North Korea. This example is a wartime production from 1941. It retains about 92% of its refinish with a bright bore and strong mechanics. A brown leather holster is included. This should make for a fun shooter and a good addition to a WWII small arms collection that doesn’t yet have a TT-33. Please see our photos and good luck!