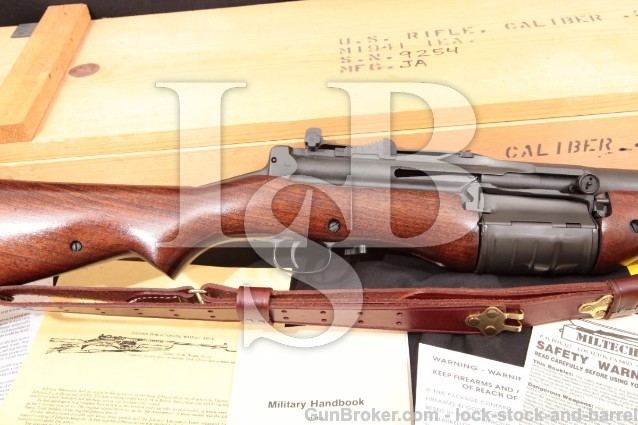 Markings: The top of the receiver is marked with patent information, the serial number “9254”, “CAL. 30-’06 SEMI AUTO.” and “JOHNSON AUTOMATICS” / MODEL OF 1941 / MADE IN PROVIDENCE, R.I., U.S.A.”. The right rear of the receiver is marked “CRANSTON / ARMS / CO” in an inverted “triangle” with a small “star” above it. The “triangle” was a Dutch National symbol and the small “star” is a Dutch acceptance mark (page 251 of Bruce Canfield’s book, Johnson Rifles and Machine Guns). The side of the bolt is marked “C4114”. Johnson made no attempt at the factory to use matching part numbers (page 251). The face of the barrel collar is marked “.30-06” on top and “41” on the bottom. The side of the barrel collar is marked with a faded “circled letter”. The bottom of the barrel shank is marked “M”. The barrel shank lug is marked “348 E”.

Stock Configuration & Condition: The new production hardwood stock has a pistol grip, several holes for mounting screws, channel under the forearm for the takedown lever, ventilated metal barrel shroud, 2 sling loops and a metal buttplate. The hole on the right front of the forearm is a takedown button. It can be pressed with the tip of a bullet to release the barrel takedown lever that is on the bottom front of the forearm. The wood shows a few scuffs & light handling marks. The LOP measures 13 1/8 inches from the front of the trigger to the back of the buttplate. The stock rates in about Excellent overall condition.

Bore Condition: The bore is bright and the rifling is sharp & deep. There is no erosion. The bore shows an M.E. of 0.0.

Overall Condition: This rifle retains about 98% of its metal finish as refinished. The metal shows only light handling marks. The screw heads show light use. The markings are well defined. Overall, this rifle rates in about Excellent condition as refurbished.

Box, Paperwork& Accessories: The rifle has a new production Model 1907 sling attached. It shows light compression marks & light scrapes. It is in about Fine condition. The rifle comes in a pine crate supplied by MILTECH. The top, back, and front are each marked “U.S. RIFLE. CALIBER .30 / M1941 1 EA. / S.N. 9254 / MFG. JA”. The ends of the crate are each marked with a “box” containing “MILTECH / rifle”. The crate has 2 metal hinges and 2 metal latches on the front that can be locked. 4 foam inserts are glued into the bottom of the crate; the rifle rests these. The wood shows scrapes & handling marks as well as small paint & ink marks (see photos). Overall the crate is in about Fine condition.
The rifle comes with a handbook for the rifle, promotional & informational paperwork, shipping paperwork from MILTECH and bills of sale to document the sale of the rifle since it left MILTECH. The handbook is titled “MILITARY HANDBOOK OF THE JOHNSON SEMI-AUTOMATIC RIFLE”. It is in about Excellent condition. The paper work is in about Fine condition.

Our Assessment: This Rare Johnson Automatics Model 1941 was completely refurbished by MILTECH so it looks great. It has a strong & bright bore, nice markings and comes in a wooden crate supplied by MILTECH. The stampings on the metal parts tell a story about the rifle. They include a Dutch acceptance mark. The refinishing of the rifle was done with care, keeping the markings intact. A limited number of these rifles were used by American troops during WWII and are prized by collectors. For specifics on the MILTECH refurbishing process see their web page at https://www.miltecharms.com/process.
This is what MILTECH has to say about the Johnson M1941 at https://www.miltecharms.com/rifles: “Restored to exact military specifications, the M1941 Johnson is a very rare firearm designed prior to WWII by a Marine Corps Captain. The quick change barrel and a ten round magazine that can be reloaded during firing are but two of the many unique M1941 Johnson innovations. The M1941 Johnson was used by the Marine Raiders and the Para-Marines at the beginning of World War II and served as their main semi-auto rifle until adoption of the M1 Garand in late 1942. Extremely limited availability.”
This Rare collectible rifle will add nicely to a Military collection. Good luck.

CA Legal or CA Private Party Transferable: This rifle can be transferred/sold in California.
NOTE: All C&R eligible and Modern Firearms must be shipped to a California FFL dealer for D.R.O.S. This does not apply to out of state buyers.