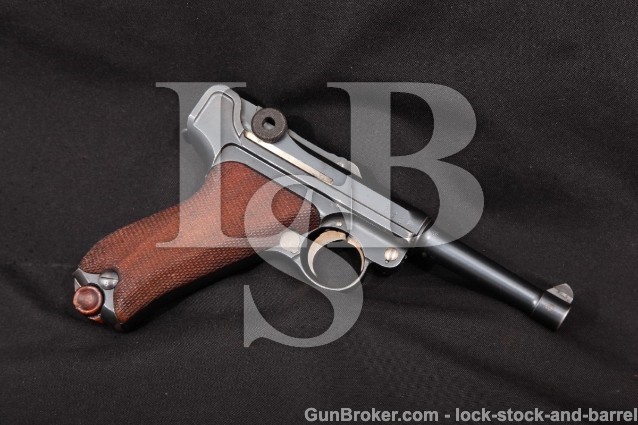 Sights / Optics: The front sight is a serrated, tapered blade dovetailed to a banded base at the muzzle. The rear sight is a “V”-notch at the top-rear of the rear toggle link.

Stock Configuration & Condition: The grips are checkered walnut panels. The right panel has a small patch of smoothed checkers at the bottom-front and a couple of individual compressed checkers. The left panel has a couple of small parts of light marring, one near the front just above center and one toward the rear just below center. The checkering is well defined, nearly sharp where not damaged. There are no chips or cracks.

Type of Finish: Blue with some small parts Strawed

Bore Condition: The bore is bright and the rifling is sharp. There is some very faint erosion scattered through the bore, mostly in the grooves.

Overall Condition: This pistol retains about 95% of its metal finish. The finish is thinning at most edges and there is a spot of wear on the left of the barrel at the front sight boss. There are infrequent spots of scattered light surface oxidation and a spot of light surface erosion on the right of the barrel at the muzzle. The top of the bolt is mostly worn to white with a few scattered light nicks and dings. There is light operational wear. Otherwise, the finish is strong with light handling marks. The screw heads are sharp though there are tool marks in the bottom of their slots. The markings are clear. Overall, this pistol rates in about Fine-plus condition.

Mechanics: The action functions correctly. The receiver and barrel are tight on the frame. We did not fire this pistol. As with all used firearms, a thorough cleaning may be necessary to meet your maintenance standards.

Box, Paperwork & Accessories: This pistol comes with a single 8-round tin plated magazine with wood floorplate and crimped joint. The exterior of the magazine has light operational wear with intact feed lips and a strong spring, however there is thick, heavy fouling on the inside of the body, at least some of which appears to be dried grease, which is interfering with the movement of cartridges in the magazine. The wood floorplate has some light marring on the sides of its concave grasping knobs. Overall, the magazine is in about Fair condition, but once the interior is cleaned out will likely be Good-Very Good.

Our Assessment: The Luger pistol was patented in 1898 by Georg Luger and first produced in 1900 by DWM (Deutsche Waffen-und Munitionsfabriken). The Luger was selected by the Swiss army in 1900 well before the Germans finally adopted it for their navy in 1904 and the army in 1908. One of the most distinctive looking pistols ever made with its toggle-link action, it was known to be strong and reliable, and was made by a host of companies including Krieghoff, Simson, Mauser and Vickers. The Germans liked it so much they used it in both world wars, even after the Walther P38 officially replaced it. This pistol is an Erfurt production gun from 1911, the first year Erfurt made the P.08. It has all matching numbered parts with proper inspection and acceptance marks and is in outstanding condition for a pistol which survived the Great War more than 100 years ago. This would make a fantastic addition to a Luger collection, especially if you’re looking for an early production Erfurt. You likely won’t find too many nicer than this one. Please see our photos and good luck!