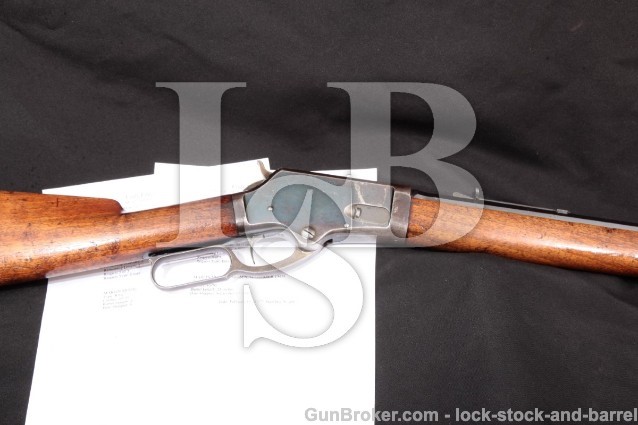 Stock Configuration & Condition: The stocks are two-piece smooth walnut with steel-capped forend, straight grip and shotgun-style smooth steel buttplate. The stocks have several scattered light compressions, drag lines, nicks, dings, scratches and scuffs with some more notable marring on the bottom of the forend just rear of center and on the comb, with a few short, thin cracks at the rear edge of the forend and the rear of each tang in the wrist. There are no chips. The forend is generally shy to the metal while the buttstock is generally proud or flush, shy only at the toe and the plate’s tang at the heel. The LOP measures 12 7/8″ from the front of the trigger to the back of the buttplate. The buttplate has worn to white with scattered etching from surface erosion which has been scrubbed out, in about Good condition as Antique. The stocks rate in about Good-Very Good condition as Antique and at least partially refinished.

Bore Condition: The bore is gray, the rifling shows light wear but is still generally sharp. There is light erosion throughout the bore.

Overall Condition: This rifle retains about 75% of its metal finish. The finish is thinning at all edges. The barrel has some scattered light scratches, nicks and dings with infrequent spots of finish wear, most of which have discolored with oxidation, otherwise showing quite strong finish. The magazine tube has similar light scratches, nicks and dings to the barrel with slightly more finish wear, also showing discoloration from oxidation. The receiver has many scattered light scratches, nicks and dings with some scraping on the right flat above the loading gate, handling wear at the bottom-front and in the top tang, otherwise again, showing stronger finish than is typical of these firearms. The screw heads range from tool marked with strong slots to disfigured with useable slots. The markings are clear. Overall, this rifle rates in about Fine condition as Antique.

Mechanics: The action functions correctly. The hammer has a half-cock safety. The trigger is crisp. We did not fire this rifle. As with all used firearms, a thorough cleaning may be necessary to meet your maintenance requirements.

Our Assessment: The Marlin Model 1881 was John Marlin’s first lever action rifle, and although patents from Andrew Burgess and others were used, John Marlin was primarily responsible for the overall design and assembly of the rifle. Besides being Marlin’s first lever action rifle, it was the first successful large-caliber lever action repeating rifle, beating Winchesters Model 1886 by several years. This model was made from 1881 to 1892, with a little over 20,000 produced. This example is a Model 1881 Rifle with 28″ Octagonal barrel chambered for .45-70 Government, according to the Cody Firearms Records Office the chambering and barrel length are original and the rifle shipped in September of 1886. The numbered parts we were able to inspect are all matching and the rifle retains much of its original finish. Any Marlin 1881 would be perfect for adding to a Marlin collection, and this one’s high condition would make it even better. Please see our photos and good luck!