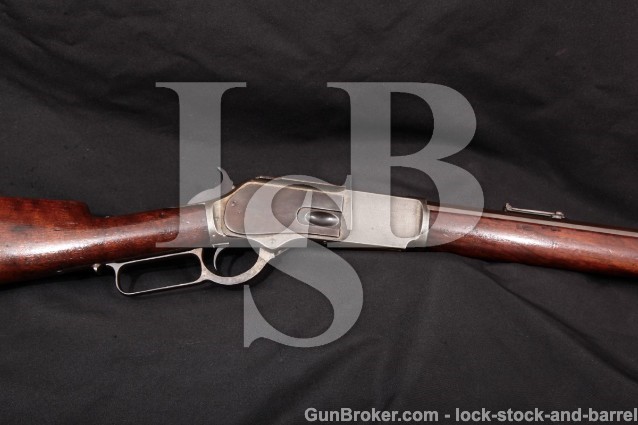 Barrel Length: The octagonal barrel is 28” in length.

Sights / Optics: The front sight is a blade dovetailed to the front of the barrel. The blade is recessed for a bead which is not present. The rear sight is a folding ladder-style sight presenting a “V”-notch when folded down and with a “V”-notch on the cross-piece when folded up. The ladder is marked from “2” to “10” on the right side and the top is marked “1876”. The top tang is drilled, tapped and filled for a peep sight (none included).

Stock Configuration & Condition: The stocks are two-piece smooth walnut with a straight grip, steel nosecap and steel crescent buttplate with trapdoor storage compartment. The forend has scattered light-moderate compressions, drag lines and handling wear. The buttstock has similar wear with a bruise on the left above the rear of the bottom tang, a gouge on the left just below the buttplate’s top tang, two more notable gouges on the right just below the buttplate’s tang and some marring at the toe. There are tiny losses at the front of the wrist to each side of the top tang. There are no cracks. The LOP measures 13” from the front of the trigger to the back of the buttplate. The buttplate has worn to white with scattered scrapes and scuffs, scatered spots of discoloration from oxidation and some residue, likely wood finish, in about Good condition. The stocks are in about Good-Very Good overall condition as possibly refinished Antique.

Bore Condition: The bore is gray with shallow, worn rifling. There is light erosion scattered throughout the bore with a spot of more moderate erosion in the bottom of the bore approximately mid-way down the bore.

Overall Condition: This rifle retains about 0% of its metal finish. The barrel and magazine tube have developed a light patina with scattered spots of darker surface oxidation and light surface erosion. The magazine ring has several nicks, possibly tool marks, and there are some scattered nicks and dings on the edges of the barrel. The receiver and sideplates have some scattered light surface erosion and scraping which appears to be from heavy cleaning. The receiver and sideplates have mostly worn to white with scattered discoloration from oxidation. The screw heads range from sharp to slightly disfigured with useable slots. The markings are clear, but the barrel markings show wear. Overall, this rifle rates in about Good condition as Antique.

Mechanics: The lifter is brought up too far when the lever is pushed forward, preventing the bolt from coming forward when trying to pull the lever back. The set trigger mechanism doesn’t appear to function correctly, feeling as though the trigger is always set, but not lighter when the trigger is pushed forward to set it. The hammer has a half-cock safety and there is no lever safety. We have not fired this rifle. As with all used firearms, a thorough cleaning may be necessary to meet your maintenance standards.

Our Assessment: The Winchester Model 1876 was a heavier-framed rifle than the Model 1873, and was the first to be chambered for full-powered centerfire rifle cartridges, as opposed to rimfire cartridges or handgun-sized centerfire rounds. While similar in design to the 1873, the 1876 was actually based on the prototype 1868 lever-action rifle that was never commercially produced by Winchester. It was introduced to celebrate the American Centennial, and earned a reputation as a durable and powerful hunting rifle that was also used by the Canadian North-West Mounted Police and the Texas Rangers. Theodore Roosevelt used one on his early hunting expeditions in the West and one was found in the possession of Apache warrior Geronimo after his surrender in 1886. Unfortunately, the 1876 lost popularity when the Model 1886 was introduced in heavier calibers. This rifle is chambered in .40-60 Win., a cartridge designed for the short action Model 1876 rifle by necking down the .45-60, itself a shortened version of the .45-70 Govt. This is a 3rd Model 1876 rifle that is in about Good condition with hte surfaces appearing to have been cleaned and with surface oxidation and erosion scattered throughout. The bore is gray with moderate wear in the rifling, light erosion scattered throughout and a spot of more moderate erosion about mid-way down the bore. The lifter tends to get pushed up too far, interrupting the bolt’s travel, and the set trigger mechanism doesn’t appear to be functioning properly. While we do not have a full letter, an inquiry was made to the Cody Firearms Records Office confirming that this rifle was made in 1886, chambered for .40-60, with an octagon barrel and set trigger. The 1876 Winchester was only made for 21 years, with a total of about 63,871 made in rifle, carbine and musket formats, with the result that ALL are collectable, one such as this with a special-order feature even moreso. This would be a great rifle to add to a collection, placed between an 1873 and an 1886. Please see our photos and good luck!