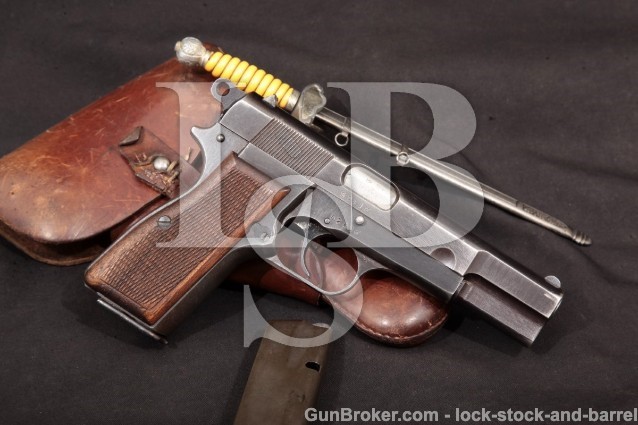 Stock Configuration & Condition: The grips are two-piece checkered walnut panels with smooth borders. The grips have light handling wear with a few scattered light marks. The checkering is well defined. There are no chips or cracks. Overall, the grips are in about Very Good-Fine condition.

Finish Originality: The finish is Original, the barrel is not original to the gun.

Bore Condition: The bore is mostly bright and the rifling is sharp. There is some extremely light erosion scattered through the bore.

Overall Condition: This pistol retains about 65% of its metal finish. The finish is thinning at all edges. The grip straps and trigger guard show handling wear with some other scattered spots of light finish wear. The left-front of the dust cover has a spot of more notable wear. There are some scattered light scratches and scrapes. There appear to be a few spots of minor surface erosion, but it is difficult to tell whether this is indeed erosion or just a feature of the rough, wartime finishing process. The controls show light handling wear, slightly more wear on the magazine release checkering. The screw heads range from sharp to lightly tool marked with strong slots. The markings are mostly clear except for a couple of the waffenamts and one of the Belgian proofs on the barrel. Overall, this pistol rates in about Very Good condition.

Mechanics: The action functions correctly. The pistol has frame mounted manual safety. This pistol does not have a magazine disconnect. The slide is tight to the frame and the trigger has a tiny amount of creep after a smooth takeup. We have not fired this pistol.

Box, Paperwork & Accessories: This pistol comes with a total of two 13 round magazines with aluminum followers and spring tabs integral to the baseplates, a brown leather holster with correct eagle over WaA920 waffenamt and “cgn / 43” markings and a WWII Nazi Luftwaffe miniature dagger. The magazines have thinning finish at the edges, light operational wear and one has some scattered surface erosion, in about Good-Very Good condition. The holster has scattered wear, scratches, scuffs, thinning finish, a few minor cuts and repairs made to the flap’s retention thong, otherwise showing intact stitching, in about Good condition. The dagger is marked “SCHOELLER-BLECKMANN-PHOENIX-EDELSTAHL” on one side, the other having a stick-figure king on throne over “SMF / SOLINGEN” logo and “D.R.G.M.”. The dagger’s sheath has two rings attached as from a sword sheath and oak-leaf motif toward the bottom on each side. The sheath has scattered light wear, the blade shows light wear, mostly toward the point, and the wire-wrapped grip shows only a few scattered light marks, in about Very Good-Fine condition. Please note, no magazine will be included for buyers who reside where they cannot be legally transferred.

Our Assessment: The Browning High-Power pistol is based on a design by American firearms inventor John Browning, and completed by Dieudonné Saive at Fabrique Nationale. Browning died in 1926, several years before the design was finalized. The Hi-Power is one of the most widely used military pistols in history, having been used by the armed forces of over 50 countries. The Hi Power name didn’t refer to the cartridge, but to its 13-round magazine, holding five more than the Luger and six more than the Colt 1911. Its high magazine capacity and ergonomic grip frame have made it a favorite amongst civilian shooters as a carry pistol and for home defense. The High Power was adopted by the Belgian military and the early pistols were equipped with a tangent rear sight and a grip that was slotted for a wooden stock. When Germany invaded Belgium, they took over the FN plant and continued making the High Power, but soon dropped the tangent rear sight and the grooved grip after stocks of pre-invasion parts were used-up. In addition to guns made with and without tangent sights as well as with and without slotted grip frames, the Germans also used at least three different Waffenamt codes for the pistol creating several different variants for later collectors. This pistol was made in Ca. 1944 as the occupation forces were rushing production in the face of an impending invasion of France. It is in about Very Good condition with about 65% of its finish remaining. The bore is mostly bright with sharp rifling and some very faint erosion. The pistol is correctly marked except for the barrel which has been replaced, and the serial number on the slide and frame are matching. The pistol comes with a properly marked holster as well as a Luftwaffe miniature dagger. With its late serial number and fixed sight, this WWII pistol will certainly be of interest to the WWII, Browning or FN collector. Please see our photos and good luck!

CA Legal or CA Private Party Transferable: This C&R eligible handgun CAN be transferred as a Dealer Sale in California and CAN be sold as a Private Party Transfer (PPT) at our Simi Valley shop. All cartridge firing firearms (even C&R’s and antiques) sold to a California resident must be DROS’d. This does not apply to out of state residents. The high capacity magazine will not be provided to a California resident or to a resident of any state with magazine capacity restrictions.