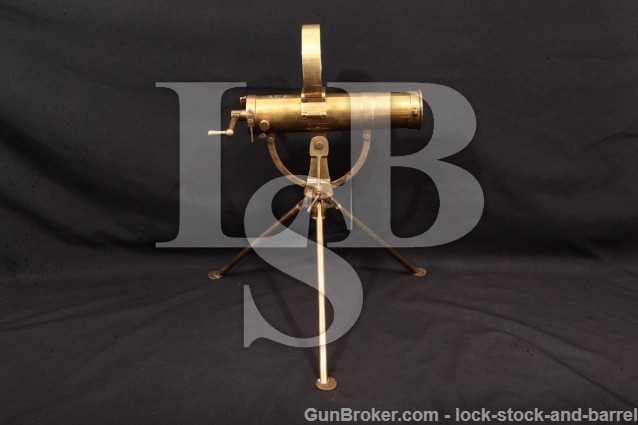 Stock Configuration & Condition: The gun is mounted on a brass tripod base. The mount pivots on its base, allowing for windage adjustment and has a “U” shaped arm attached at two points on the bottom of the casing allowing it to pivot for elevation. Combined, this allows the gun to be rotated 360 degrees and elevate and depress to nearly vertical. The tripod and mount have some light operational wear, scattered light tarnish and a few minor marks and scuffs. Overall, the mount and tripod are in about Very Good-plus condition.

Overall Condition: This gun retains about 95% of its metal finish. The metal surfaces show infrequent scattered light scuffs, tarnish and surface oxidation, all of which can polish up should you choose or be left as is. There are a few scattered light marks and faint operational wear. The screw heads are sharp. The markings are clear and crisp. Overall, this gun rates in about Fine condition.

Mechanics: The action functions correctly. We did not fire this gun. As with all used firearms, a thorough cleaning may be necessary to meet your maintenance requirements.

Box, Paperwork & Accessories: This gun comes with the tripod mount as described and a 61-round Accles drum magazine. The magazine functions correctly and is serial-numbered to the gun, in similar Fine condition. Please note, no magazine will be included for buyers who reside where it cannot be legally transferred.

Our Assessment: Richard Gatling was a prolific inventor with contributions in the fields of agriculture, screw-propellors and his most famous invention, the Gatling Gun. Interestingly, his intent with the Gatling Gun was to reduce deaths from war by allowing a smaller number of troops to produce a greater volume of fire, thus reducing the number of men required to fight in wars. While this did not exactly come to pass, his gun was nonetheless revolutionary, allowing for sustained fire at high rates and, though not considered a machine gun by todays definitions, paved the way for the truly automatic weapons which were to follow. Gatling Guns saw limited use in the American Civil War, being personally purchased by some officers for their units, but was not officially adopted by the U.S. Military until 1866. The guns would also be used by European colonial powers in Africa and Asia and by South American nations including Argentina and Peru. The Model 1893 was one of the later iterations, with six barrels instead of 10, and much shorter. The mass of 10 barrels, bolts and locks all in a forged bronze case was one of the only drawbacks to the Gatling Gun for military use, with the gun being quite heavy and difficult to move quickly. The smaller “Bulldog” was easier to move and set up, being able to be moved and assembled by as few as two people. With painstaking detail, Karl J. Furr hand-crafted this miniature Bulldog Gatling Gun as a fully functional, .22 Short caliber handgun. It will certainly be easier to set up at the range than a full-sized Gatling Gun and also less expensive to feed than its larger, .45-70 caliber cousins. The gun is in Fine condition with little sign of use and only some scattered light tarnish and surface oxidation in its metal finish. This is a rare opportunity to have a fully functional Gatling Gun of your very own that can also be set up on your desk at home. What could be cooler than that? Please see our photos and good luck!

CA Legal or CA Private Party Transferable: This handgun CANNOT be transferred as a dealer sale in California. This handgun CAN be sold as a Private Party Transfer (PPT) at our Simi Valley shop. All cartridge firing handguns (even C&R’s and antiques) sold to a California resident must be DROS’d. The magazine cannot be transferred with this pistol to a CA purchaser. This does not apply to out of state residents.