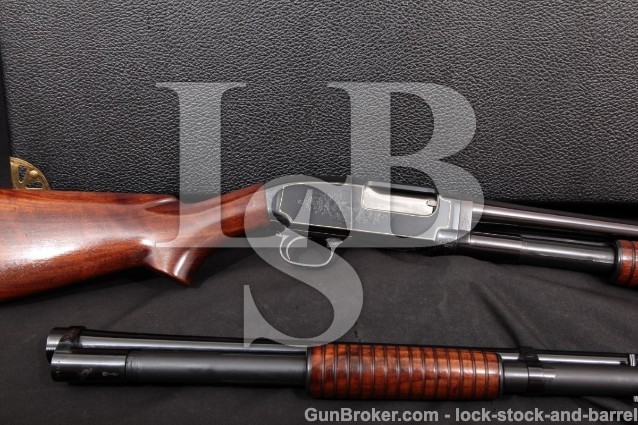 Markings: The bottom front of the receiver is marked with the serial number and “2 3/4”, the rear of the trigger guard is marked “46”. The receiver has 12-1 style engraving (“The Winchester Model Twelve”, Madis, P118) with scroll engraving surrounding birds in flight on each side with scroll engraving motifs at the front and rear. The bottom of each bird scene is engraved “A. BEE” and the flats have gold borders. The top-front of the receiver has an ovalled “WP” proof.

Choke: The 26″ barrel is Cylinder Bore. The 28″ barrel is marked “FULL”, but our gauge reads Improved Modified, both fixed.

Sights / Optics: Each barrel has a silver-colored bead at the muzzle. The top of the receiver has fine serrations for glare reduction.

Stock Configuration & Condition: The stocks are walnut with smooth grip, straight comb, checkered black hard rubber Winchester buttplate, and each forend has 14 grooves and tapers toward the front. The buttstock has scattered light compressions, drag lines and scratches with thinning finish at sharper edges and darkening in the wrist from age and oil. The forends each have some scattered light compressions and scuffs, slightly more on the 28″ barrel’s forend and the 28″ barrel’s forend also has some thinning finish at the rear edge. There are no chips or cracks. The LOP measures 13 7/8” from the front of the trigger to the back of the buttplate. The plate has light wear around the edges and a few compressed checkers to the left of the bottom mounting screw, in about Very Good-plus condition. The stocks are in about Very Good-Fine overall condition as partially not original to the gun (one of the barrel groups has been force-matched and is not original to the gun).

Finish Originality: Refinished. Our consigner informs us that the gun was blued by Eubanks Gunsmithing after Angelo Bee had engraved it.

Bore Condition: The bores are both bright. There is no erosion in either bore.

Overall Condition: This shotgun retains about 96% of its metal finish. The finish shows very light thinning at a few edges, most notably the trigger guard. The receiver has some scattered light marks, most of which appear to be under the finish. The bolt, lifter, action bars and magazine tubes show light operational wear and the barrels have a few light marks from disassembly/reassembly. The factory markings are all clear, but some are shallow or have soft edges. The 26″ barrel’s serial number is deep and crisp, likely indicating that it has been force-matched to the 28″ barrel and receiver. The engraving and pheasants are crisp and have good detail. The screw heads are sharp. Overall, this shotgun is in about Fine-plus condition as refinished.

Box, Paperwork & Accessories: This shotgun comes in a black leatherette hard-sided case from Pro Gun Custom Cases with a fitted red felt interior, brass combination lock latches, and a Winchester label on the inside of the lid. The case shows only faint storage wear, in about Fine-Excellent condition.

Our Assessment: The Model 1912 (shortened to Model 12 in 1919) was the next step from the Winchester Model 1897 hammer-fired shotgun, which in turn had evolved from the earlier Winchester Model 1893 shotgun. The Model 12 was designed by Winchester engineer T.C. Johnson, and was based in part on the M1893/97 design by John M. Browning, in that it used a sliding forearm or “pump action” to cycle the mechanism. It became one of the most popular shotguns of the 20th century with more than two milliion sold in a number of configurations, used by sportsmen, law enforcement and the U.S. Military alike. This example was produced in 1934, but it has since become something much more. We suspect that the 28″ barrel is original to the gun and the consigner informs us that the stock is original as well. However, the gun has been upgraded with pigeon-grade style engraving from Master Engraver Angelo Bee and had a 26″ Cylinder Bore barrel matched to it. The whole package comes in a nice Pro Gun Custom Cases case, perfect for storage, transport and display. This beautiful set would make an excellent addition to any collection, especially those who appreciate Bee’s work or who just love beautiful Winchesters. Please see our photos and good luck!