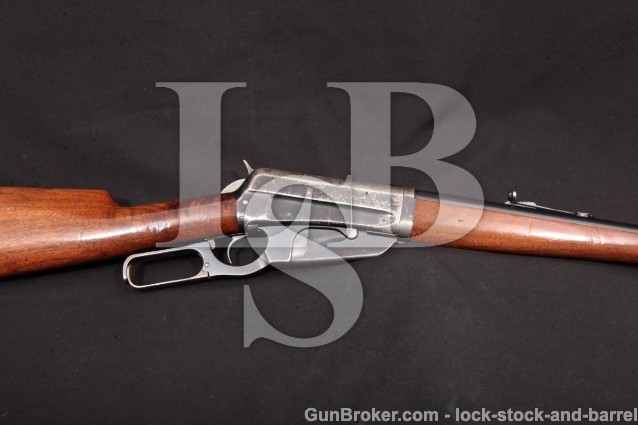 Sights / Optics: The front sight is a brass beaded blade dovetailed to a base at the front of the barrel. The rear sight is a “V”-notch leaf-and-elevator semi-buckhorn sight dovetailed to the rear of the barrel with the notch fine-adjustable for elevation. The top tang is drilled and tapped for a peep-sight, but none is included.

Stock Configuration & Condition: The stocks are two-piece smooth walnut with steel crescent buttplate, Schnabel forend tip with ebony insert, straight grip, and straight comb. The stocks have several scattered light compressions, scuffs, nicks and dings with a few more notable compressions and nicks on the right of the forend and the left of the wrist. The top of the wrist, between the top tang and the comb, has been relieved, possibly to accommodate a previously installed peep-sight, though there is also a notch in the front of the comb as from a folding peep-sight resting there. There are no chips or cracks. The LOP measures 12 5/8” from the front of the trigger to the back of the buttplate. The plate has mostly worn to white, mottled slight discoloration from oxidation. The plate rates in about Good-Very Good condition. The stocks rate in about Very Good overall condition as modified.

Bore Condition: The bore is semi-bright and the rifling is sharp. There is very light erosion scattered throughout the bore. Our gauge shows an ME of about 1.5.

Overall Condition: This rifle retains about 65% of its metal finish. The finish is thinning at all edges. The barrel has finish wear at the muzzle, a spot of wear on the right mid-way between the forend and muzzle, slightly more wear along the left between the muzzle and forend, and some scattered light marks in otherwise strong blue finish. The barrel extension is mostly worn to white, with strongest finish on the right flat. The receiver has moderate finish wear with many scattered scratches, scrapes, nicks and dings throughout, showing strongest finish in the cuts on the sides below the flats. The magazine, lever and bolt show light-moderate operational wear. The screw heads range from sharp to lightly disfigured with useable slots and several of the screw heads have tool marks around them. The markings are clear. Overall, this rifle rates in about Very Good condition.

Box, Paperwork & Accessories: This rifle comes with a series of photo scans and information about its previous owner (see Our Assessment).

Our Assessment: The 1895 Winchester was the first lever-action model to incorporate a box magazine. The box magazine allowed the use of spitzer-type bullets without the danger of ignition in a tubular magazine. The use of spitzer bullets improved ballistics and allowed for much higher velocities, especially with the use of smokeless powder. At the time of its introduction, the 1895 was considered the lever action big-game rifle, but it also saw favor with some militaries, being purchased in large numbers by the Russian Empire for WWI, given the Pancho Villas best troops during the Mexican Revolution, and 10,000 were purchased by the US Military for use during the Spanish American War. With its quick handling characteristics, box magazine and pointed bullet capability, the Model 1895 changed the world of sporting rifles forever. This rifle is a takedown which was made in 1914 with a barrel chambered in .30-03. The .30-03 was only a standard chambering for the 1895 from its introduction in 1905 until 1908 when it was replaced by the new .30-06 cartridge. After 1908, the .30-03 was only available by special order, indicating that this is a special order rifle. This example was likely originally purchased by a particularly interesting individual, Ulysses Adolphus Colfax “Dolph” Thomas. Dolph was a man born in 1870 in New Market, Iowa. He had a number of different careers as a farmer, carpenter, Deputy and later Sheriff of Sheridan County, Wyoming, and also became a Police Officer in Cody, Wyoming. Throughout his life, he would also supplement his income by working as a hunting guide, leading “dudes” on excursions in the Absaroka Range of the Rocky Mountains, supposedly including one “dude” in particular, Theodore Roosevelt. Roosevelt himself favored the 1895 Winchester, considering his rifle chambered in .405 to be the “medicine gun” for lion. This rifle, as well as a Starr D.A. 1858 Army and C.B. Allen Knife Pistol in this same auction, were owned by Dolph Thomas and have been passed down through his family, even being pictured together as part of his collection on an included photo of Dolph’s collection. Dolph would lead a very interesting and busy life, still working as a driver for a logging company at the age of 68 when he died in an unfortunate accident in 1939. This revolver as well as the other firearms from Dolph’s collection are a wonderful example of arms used by a hard-working American who brought law and order, but also exploration and wonder to the American frontier. Please see our photos and take the time to view Dolph’s other firearms in this auction. Good luck!