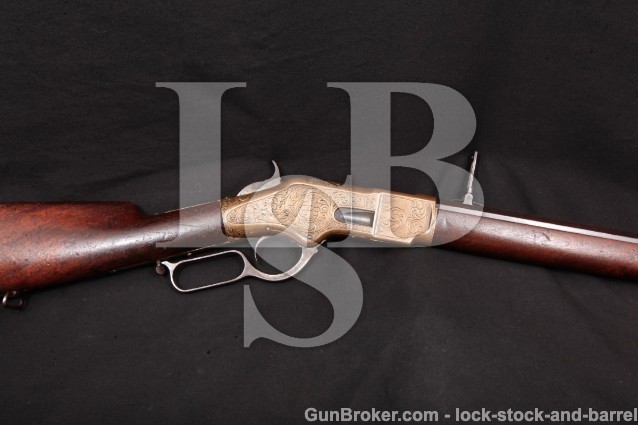 Markings: The top of the barrel is marked “WINCHESTER’S-REPEATING ARMS. NEW HAVEN. CT. / KING’S-IMPROVEMENT-PATENTED- MARCH 29.1866. OCTOBER 16. 1860.”. The lower tang is marked “124856”. The inside of the buttplate at the toe is marked “4856”, the inlet for the top tang in the wrist of the stock is marked “856”. The left of the bottom tang is marked “VRX”. The receiver, nosecap and buttplate have scroll engraving with a deer scene on the left sideplate and the scroll engraving on the right sideplate swirling around a flower in the center. We cannot say for sure that this is factory engraving, but the “VRX” marking indicates a special order feature, the style of the engraving matches that of factory engraved examples, and it is noted in “The Winchester Book” by Madis that “A comparative count of engraved guns, comparing early models 66 with the later numbers, indicates that the early models 66, prior to serial numbers 125,000, were engraved at the factory in such large comparative numbers that the total ratio of engraved guns is brought to a much larger figure. Models 66, therefore, made prior to 1875 and numbers near 125,000 were much more frequently engraved than numbers after 125,000″ (P126). Between the “VRX” marking, the engraving style, and this rifle falling into a serial range with increased frequency of engraving, we suspect that it is Ulrich factory engraving.

Sights / Optics: The front sight is German silver blade held in a slotted rectangular base dovetailed to the front of the barrel. The rear sight is a folding ladder-style sight with external retaining spring. When folded down, the rear sight presents a “V”-notch. When folded up, there is a ladder sight with the cross-piece having a “V”-notch and the top of the ladder having a wide, shallow notch with a sharper “V”-notch at the bottom. The ladder is graduated from 300-800 yards with the top notch marked for 900. The crosspiece is loose to the ladder, staying in place only at the bottom or the very top. The rear sight is loose in its dovetail but retained by the spring. The top tang is drilled, tapped and filled for a peep sight (none included).

Stock Configuration & Condition: The stocks are two-piece smooth walnut with brass nosecap, brass crescent buttplate with trapdoor storage compartment a sling swivel mounted to a plate screwed to the belly and another sling swivel mounted to a stud on the bottom of the nosecap. The buttstock is a third variation with short wrist, long comb and sharp curve between the wrist and comb. The stocks have light compressions, drag lines, scratches and some bruising scattered throughout, showing light handling wear and possibly light water damage at the rear of the buttstock. The wood is generally well fit to the metal. There are no chips or cracks. The LOP measures 13 1/4″ from the front of the trigger to the back of the buttplate. The plate has a light-moderate mustard patina with scattered nicks and dings, light wear on the lip of the trapdoor and well defined engraving at the top mounting screw, in about Very Good condition as Antique. Overall, the stocks are in about Very Good condition as Antique.

Overall Condition This rifle retains approximately 30% of its metal finish, mostly in the brass. The barrel is worn to white at edges with the flats showing a light patina with scattered spots of darker oxidation, nicks, dings and scratches. Blue finish does still show in some protected areas such as along the magazine tube and around the rear sight. The magazine tube has a similar patina to the barrel with similar scattered spots of darker oxidation. The hammer and lever have mostly worn to white with scattered light marks and surface oxidation. The receiver and nosecap show a light-moderate mustard patina with the centers of the sideplates slightly brighter and have scattered light nicks and scratches with a few spots of darker tarnish. The screw heads range from sharp to lightly tool marked with strong slots. The markings are clear with well defined engraving and good detail on the deer scene. Overall, this rifle rates in about Very Good-plus condition as Antique.

Mechanics: The action functions correctly and the hammer has a half-cock safety. The hammer is properly pushed back to full-cock by the striker when the action is cycled, however when cocking manually, it takes some extra effort at the end of the pull to reach full-cock. Despite this, the action is still quite smooth. We have not fired this rifle. As with all used firearms, a thorough cleaning may be necessary to meet your maintenance standards.

Our Assessment: The Model 1866 rifle was the first firearm to be built by the new Winchester Arms after they changed their name from the New Haven Arms Company in 1866. The Model 1866 was a much-improved version of the Henry rifle, with a loading port on the right side of the receiver featuring a spring-loaded cover, through which cartridges could be fed into a new solid magazine tube that was much stronger than the slotted tube used on the Henry as well as not allowing dirt and debris such easy entry. The M1866 was made in rifle, carbine and musket versions and in four different models dependent on date of manufacture. All of the different models were chambered in .44 Henry Rimfire, with some of the later 4th Models chambered in .44 Henry Centerfire. This rifle is a Model 1866 Rifle with a 24 1/4” octagon barrel and still has its original rimfire bolt. The rifle has beautiful scroll engraving with a deer scene on the left sideplate. Though we have been unable to confirm, we suspect that this engraving is factory, due to the style, special-order assembly mark on the tang, and the frequency of factory engraving in Models 66 produced in this period. We also believe this to be Ulrich’s work. The rifle is in about Very Good condition with about 30% of its metal finish, mostly in the brass, wear in the stocks consistent with field use over the past century and a half, and strong mechanics. All of the 1866 models are very collectable due to their age and the relatively short time period over which they were made: the M1866 was made up until the 1890’s, but very few were made after the 1873 rifle was introduced with its improved center fire cartridges. Most Winchester collectors would never think that their collection was complete without at least all three variations of the M1866, while some would argue for all the variations of the four different models. Please see our pictures and good luck in your bidding!