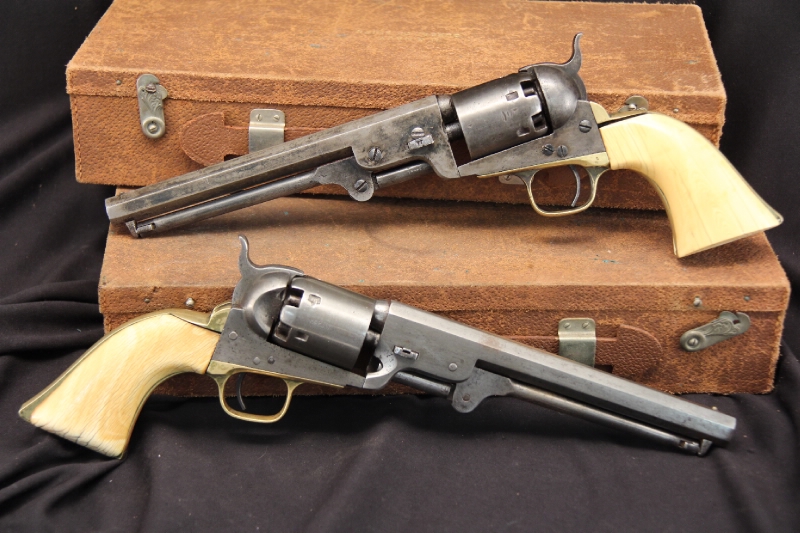 S/N 107390: This gun is marked “107390” on the back strap, trigger guard, frame and barrel assembly. The cylinder is marked “10???8”. The loading ram is marked “7390” though the “)” looks like a “6”. We could not remove the wedge on this one. The left side of the frame has had the “Colt’s Patent” removed. The left side of the trigger guard is marked “L”.
Barrel Length: 7 1/2″ (+/-)
Sights / Optics: These revolvers are mounted with notched hammer rear sights and brass bead front sights.
Stock Configuration & Condition: The grips are authentic and antique bone or tusk. The fit of the grips is not very good, and though authentic, these are likely not original or even period to the guns. There are stress cracks, losses at the heels and toes and much discoloration. Please examine our pictures. The grips rate in about Fair overall condition.
Type of Finish: Mix of touch up bluing and cleaned metal.
Finish Originality: Some touch up, some bare metal.
Bore Condition: The bores are dark and rough and the rifling is visible, but worn. There is much pitting and erosion.
Overall Condition: These revolvers retains about 0% of their metal finish. #90 looks to have been cleaned and touched up. There is pitting and erosion throughout, with much marking to the grip frame. The trigger guard has discolored forward of the trigger, as has much of the brass. There is evidence of cleaning to the metal, so much so that some of the markings have been removed. The serial number on the cylinder is obliterated while the others are clear. #89 has also been cleaned, though there is no evidence of touch up. The markings are visible, though neither gun shows a cylinder scene. This revolver also has much surface rust from poor storage on its left side. These guns are great for their consecutive serial numbers, though leave something to be desired with regards to finish. The Screw heads are worn, with some probably replacements. The markings are a mix of deep and obscured. Overall, these revolvers rate in about Poor – Fair condition.
Mechanics: The action on #90 functions correctly, #89 does not stay at full cock and does not rotate the cylinder when cocking. We did not fire these revolvers.
Box, Paperwork & Accessories: Here comes the best part… These guns come in two very interesting pig skin covered cases, embossed “U.S. Navy / Bureau Of Ships”. These boxes are sound and of an unknown vintage. It appears as though there were liners and dividers in the boxes, which are now missing. These are interesting and vintage boxes, showing appropriate wear and age.
Our Assessment: These revolvers on their own are not a lot to speak of, but together and in these boxes, they are a great set. We do not know the origin of the boxes, though they are interesting and old. Finding consecutively serial numbered Colts is always desirable, and you can probably count the times on one hand where you have seen consecutive 1851 Navies. You could probably even count the number of times on one hand that you have seen any consecutive percussion Colts for that matter. We have been informed that serial. 107390 has been re-serialized. The original 1851 with that serial number had a “U.S. Police Balto” marking. We do not know the origin of the Colt that we have as serial no. 107390.