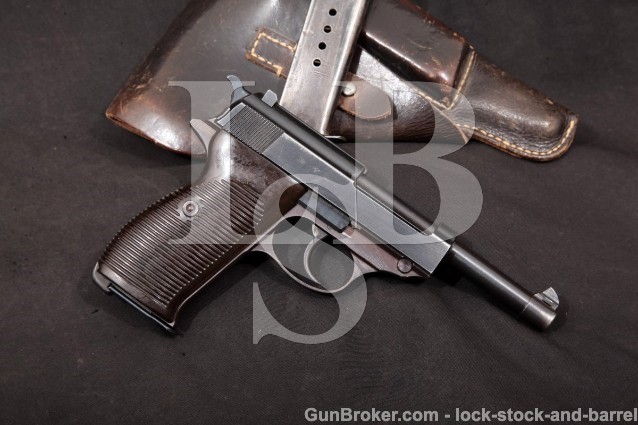 Stock Configuration & Condition: The grips are serrated reddish brown plastic with smooth tops and borders that enclose the backstrap. The bottom rear corner of the left grip is molded to provide access to a lanyard ring attached to the frame. There is very light wear in the smooth surfaces, just enough to turn the otherwise bright surfaces somewhat dull. There are few drag lines in the smooth areas and several tiny nicks in the edges of the serrations. The grips rate in about Fine overall condition.

Type of Finish: The finish on the slide is a dark blue, almost black, while the frame has a lighter color, with purple tints on the sides. Beginning with the ac-43 series, Walther started taking less care in controlling their bluing process, so while some parts came out dark, like the slide on this pistol, sometimes the finish was lighter in color with hues of purple and dark red found on the frame.

Bore Condition: The bore is a mostly bright with sharp rifling. There are hints of microscopic erosion in the grooves at the muzzle.

Overall Condition: This pistol retains about 87% of its metal finish. There are several tiny spots of pinprick surface erosion scattered over the right side of the slide and frame. There is thinning on the edges of the barrel band, barrel retaining latch, slide release and frame, surface loss on the edges of the slide, safety, and extractor, light thinning on the sides of the slide and thinning on the front strap, which has a somewhat mottled looking finish. There are several light handling marks scattered over the surfaces with a ding and a few drag lines in the right side of the slide. The edges of the slide serrations, hammer and slide release are sharp while those on the barrel retaining latch and safety show light wear. The grip screw is sharp and the markings are crisp. Overall, this pistol rates in about Fine condition as refinished.

Mechanics: The action functions correctly. The double action trigger pull is a little stiff, and the single action pull is crisp. The slide is tight to the frame. We did not fire this pistol. As with all used firearms, a thorough cleaning may be necessary to meet your maintenance standards.

Box, Paperwork & Accessories: This pistol comes with a total of two 8 round blued single stack magazines and a black leather top flap holster. The magazine in the pistol is marked “P38v / ac” on its lower left side and with a “Eagle / 359” Waffenamt near the top of the spine (all correct for this vintage Walther.). It shows light wear with marks through the finish in the floorplate from the magazine latch. The magazine is in about Fine condition. The spare magazine is marked with an “Eagle 88” Waffenamt at the bottom of its spine indicating it was made at Spreewerke. The magazine shows thinning and light erosion in the body with finish loss on the edges of the floorplate. It is in about Good Plus condition. The holster is made from a single piece of leather that is folded over at the front and sewn along the muzzle and back edge with white thread. The top flap is sewn to the top of the back side of the holster and folded over to the front, and has a small strap sewn to it for securing to stud on another flap sewn to the back of the holster which covers the trigger guard. There is a magazine pouch sewn to the outside of the holster and two belt loops sewn to the back side. The back side of the holster is marked “P.38”. There are spots of finish loss on the back of the holster and on the top flap, with thinning on the rear of the top flap and on the edges of the magazine pouch. There are several drag lines and a few light scuff marks in the holster. There are no cracks and the stitching is intact. The holster is in about Very Good condition.

Our Assessment: The P38 occupies a significant place in history. It was the first locked breech pistol to have a single action/double action trigger. After the start of WWII, Walther could not keep up with the production required, and production was ordered to commence at both Mauser and Spreewerke in 1940. By the end of the war, Walther had only produced about 580,000 of the 1.2 million produced. When Walther first began making the P38’s, all of the small parts including the grips were serialized, but as the war went on, this practice was gradually discontinued. This pistol was made by Walther early in 1943 in the first run of pistols before they started adding letter suffixes to the serial numbers. The serial numbers are all matching, and the markings are correct for this vintage pistol. The pistol is in about Fine condition, with about 87% of its original blue finish remaining. The bore is bright with sharp rifling and a sprinkling of microscopic erosion at the muzzle. To complete the package for the serious collector, it comes with two magazines and a post-war leather top-flap holster as used by the German police. No collection of WWII small arms would be complete without a P38 made by each of the three manufacturers, and many collectors have one from each year that they were made, in addition to most of the common variants. This pistol is perfect for the serious collector – we don’t see than many P38’s with an original finish, and very few indeed with a finish this nice.