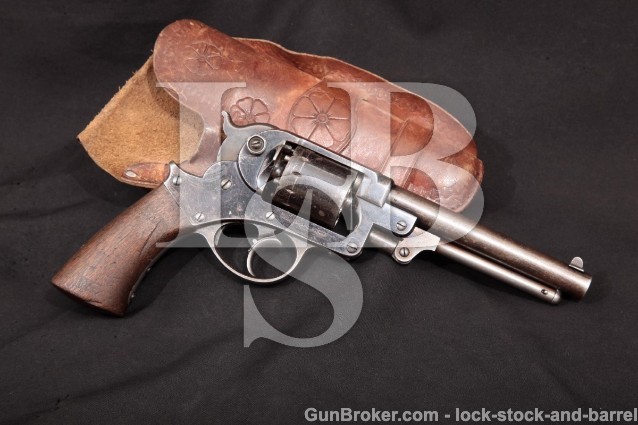 Year of Manufacture: C. 1860s (Per Flayderman’s, this model was produced from the late 1850s to the early 1860s with approximately 23,000 produced, beginning with serial number 1).

Sights / Optics: The front sight is rounded blade, integral to a base that is dovetailed onto the barrel. The rear sight is a “V” notch in the hammer.

Stock Configuration & Condition: The grips are a one piece walnut stock. The right has a pair of deep bruises, one toward the top-front and one on the bottom edge, the left has a bruise at the bottom edge toward the front. The grip has several scattered light compressions, scuffs and light handling wear throughout. There are no chips or cracks. Overall, the grip is in about Very Good condition as Antique.

Bore Condition: The bore is semi-bright, the rifling is sharp where not interrupted by erosion. There is light-moderate erosion and light pitting scattered throughout the bore.

Overall Condition: This handgun retains about 40% of its metal finish. The finish is thinning at all edges and there are light scratches, nicks and scuffs scattered throughout. The barrel has mostly worn to white with finish remaining only on the bottom where protected by the loading lever. Similarly, the loading lever has mostly worn to white with its case-coloring visible only on the protected top flat and a little on the side flats at the frame. The trigger guard and grip straps are mostly worn to white with finish remaining only at the top of the backstrap over the grip’s shoulder and the front of the trigger guard. The two portions of the frame have surprisingly strong finish outside the scratches, nicks, scuffs and thinning mentioned, as does the cylinder. The cylinder has a turn line between the stop notches and some light surface erosion on its front face. The hammer still shows some case-coloring, weakest on the top and near the strike-face. The screw heads range from sharp to slightly disfigured with useable slots. The markings are clear with the exception of the grip cartouches which are shallow and faint. Overall, this handgun rates in about Fine condition as Antique.

Mechanics: The action functions correctly, though it is not like a standard double action revolver. To fire in double action, the trigger can simply be pulled straight through from the front to rear. The sear is exposed at the rear of the trigger guard. The trigger directly interacts with the stop notches, and there are safety notches between each chamber. This means, in order to fire in single action, you must pull the trigger back enough to disengage the cylinder stop until the cylinder has advanced past the safety notch, then release the trigger to catch the cylinder as the hammer is pulled the rest of the way back. The safety is a sliding tab on the rear of the trigger with a bump. When up, the trigger can be pulled far enough to the rear to engage the sear. When slid down, the bump will stop the trigger on the frame before it engages the sear. Due to the exposed sear, this allows for single action fire, as the trigger can be pulled to the rear until the safety stops it, cocking the hammer, then the sear can be used directly as a trigger, giving a lighter, crisper trigger pull. Note: the sear can be engaged manually at any time, and care should be taken to not accidentally engage the sear when not expected. We did not fire this handgun. As with all used firearms, a thorough cleaning may be necessary to meet your maintenance requirements.

Box, Paperwork & Accessories: This revolver comes with a double-loop brown leather holster and a series of photo scans and information about its previous owner (see Our Assessment). The holster has scattered light-moderate wear with intact stitching and a few spots of light fraying and short tears, in about Good condition.

Our Assessment: The Starr D.A. 1858 was an early double-action percussion revolver created just before the Civil War, produced in both Navy (.36 caliber) and Army (.44 caliber) variants, as well as later being produced as a single action revolver. With the outbreak of the Civil War, they were purchased in large numbers, eventually making up about 13% of revolvers used by the Union Army. The cost and complexity of the double action version of the revolver led to a lack of popularity, leading Starr to introduce a more simple, traditional single action only version in 1863. After the war, demand dried up significantly, and the extra price of the Starr was simply not competitive with offerings from Colt and Remington. This example made its way out of military service and into the ownership of a particularly interesting individual, Ulysses Adolphus Colfax “Dolph” Thomas. Dolph was a man born in 1870 in New Market, Iowa. He had a number of different careers as a farmer, carpenter, Deputy and later Sheriff of Sheridan County, Wyoming, and also became a Police Officer in Cody, Wyoming. Throughout his life, he would also supplement his income by working as a hunting guide, leading “dudes” on excursions in the Absaroka Range of the Rocky Mountains, supposedly including one “dude” in particular, Theodore Roosevelt. This revolver, as well as a Winchester 1895 and C.B. Allen Knife Pistol in this same auction, were owned by Dolph Thomas and have been passed down through his family, even being pictured together as part of his collection on an included photo of Dolph’s collection. Dolph would lead a very interesting and busy life, still working as a driver for a logging company at the age of 68 when he died in an unfortunate accident in 1939. This revolver as well as the other firearms from Dolph’s collection are a wonderful example of arms used by a hard-working American who brought law and order, but also exploration and wonder to the American frontier. Please see our photos and take the time to view Dolph’s other firearms in this auction. Good luck!

CA Legal or CA Private Party Transferable: This antique handgun can be sold in California.