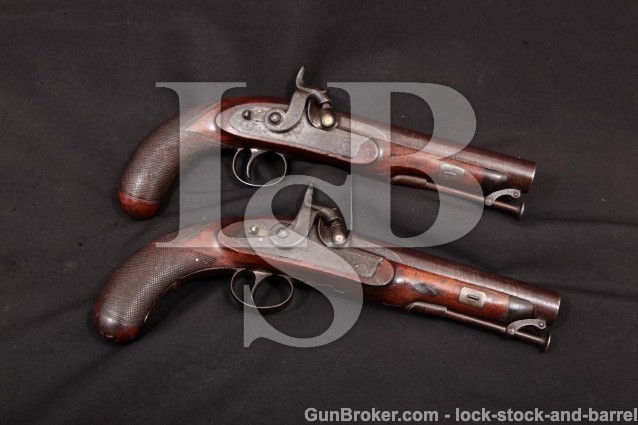 Barrel Length: The Damascus barrels are 5 ¼” in length.

Sights / Optics: The front sights are tiny brass beads screwed into the barrel. The rear sights are short “U” notched leaf sights fixed to the receiver.

Stock Configuration & Condition: The stocks are checkered walnut with a lacquered finish. The stocks have bag shaped grips and ebony tipped forends that run to within about 1” of the muzzle. There are pipes on the front underside of the forend for hinged ramrods. The forends are held with a single wedge and both pistols have a side hook on the left side at the rear of the barrel that slips over the edge of a boot with the entire barrel in the boot and only the grip sticking out. There are small silver rectangles inlaid into the tops of the grips marked with scripted characters that look like: “BPlL” (Yes, we know: a small l followed by a capital L makes no sense.).
LH32: The checkering shows moderate wear with three dings in the left side and a small mark towards the bottom on the right side. There are multiple dings and drag lines scattered over the stock with a deep ding in the flat above the rear of the sideplate and a gouge at the bottom front of the sideplate. There is oil staining in the checkering, in the underside of the forend, at the back of the receiver and around the side hook. The stock rates in about Very Good overall condition.
LH33: There is a repaired crack on the right side at the front of the grip, with a small nail head on the right side in the checkering and another on the top of the grip between the two checkered surfaces. There is another repaired crack at the front of the forend on the right side. The checkering shows moderate wear with several bruises. There are multiple dings and drag lines scattered over the stock with several deeper dings in the left side flat and a dark abraded spot on the right side above the ramrod pipe. There is oil staining around the metal parts and in the old bruises and dings. The stock rates in about Good overall condition.

Type of Finish: The barrels are Damascus. The sideplates are case colored and we think the receivers and upper tangs were as well. The hammers may have been case colored and the trigger guards and their tangs may have been blued: the parts have a thick dark patina that makes it very hard to determine the original finish. The lockplates, receivers, hammers, and the trigger guards and their front tangs are scroll engraved. The larger screw heads are also engraved.

Mechanics: The actions function correctly, and both have a half cock hammer safety. We did not fire these handguns. As with all used firearms, a thorough cleaning may be necessary to meet your maintenance requirements.

Box, Paperwork & Accessories: These pistols come with a hinged ramrod stored under the barrel. The ramrods are finished in the white, with the front half having developed a thick dark patina. The ramrods are in about Very Good condition.

Our Assessment: Joseph Manton was a British gunsmith who innovated sport shooting, improved weapon quality and paved the way for the modern artillery shell. Manton was a sport shooter in his own right and a friend of Colonel Peter Hawker. From 1781 onwards, he produced about 100 weapons annually, including dueling pistols and shotguns. In the early 19th Century, he invented the tube or pill lock, an improvement over Alexander Forsyth’s scent-bottle lock, but although readily adopted at the time, it was quickly overshadowed by the invention of the percussion cap. Manton’s weapons remain some of the most highly sought-after designs of the flintlock age and can fetch more at auction than Holland & Holland’s shotguns. His workforce included James Purdey (who went on to found Purdey’s), Thomas Boss, William Greener, and Charles Lancaster. This is a matched set of boot pistols made by Joseph Manton. They are scroll engraved with Damascus barrels, and have a hinged ramrod stored in the forend, along with a side hook on the left side: this allows the hook to be placed over the top edge of the boot, keeping the entire barrel in the boot, with only the grip extending past the top of the boot – just the thing for a gentleman’s night out in London. One of the pistols is in about Very Good condition and the other Good condition. So, what we have is a matched set of pistols with consecutive serial numbers made by London’s premier gunsmith of the early 1800’s. The workmanship is meticulous and we expect the collectors of antique boot and dueling pistols to be very interested in these pistols.

CA Legal or CA Private Party Transferable: These antique percussion handguns can be sold in California.