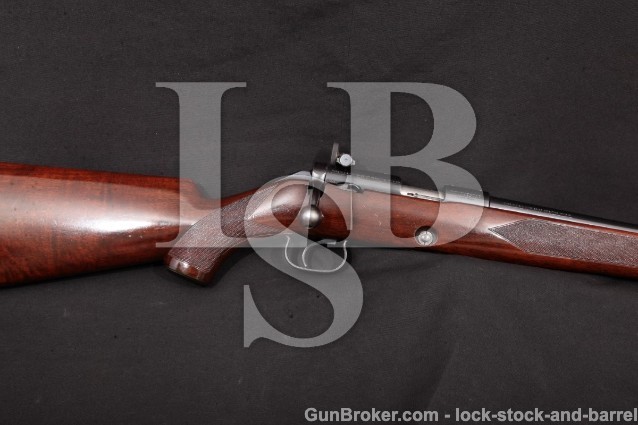 Sights / Optics: The front sight is a Redfield beaded blade dovetailed to a hooded, textured ramped base fixed to the front of the barrel. The rear sight is a Lyman 57-F fully adjustable peep sight mounted to the left-rear of the receiver. The top of the receiver is drilled, tapped and filled to accept scope mounts (none included).

Stock Configuration & Condition: The stock is a one-piece checkered walnut with ebony forend-tip, sling studs integral to plates screwed to the front and rear, capped pistol grip, cheekpiece and checkered blued steel buttplate. The stock has scattered light compressions, drag lines and scuffs. The checkering is well defined. There are no chips or cracks. The LOP measures 13 1/2” from the front of the trigger to the back of the buttplate. The plate has finish wear around the edges and at the heel with slight discoloration from oxidation in the wear, strong bluing in the middle and well defined checkering, in about Very Good condition. The stock is in about Very Good-Fine condition.

Overall Condition: This rifle retains about 96% of its metal finish. The finish is lightly thinning at some edges. The barrel and receiver have only a few scattered light marks. The bolt body shows light-moderate operational wear and the handle has light finish wear on the outside of the knob. The bottom metal has several scattered light marks with infrequent very light freckling. The screw heads are mostly sharp with a few showing light tool marks and strong slots. The markings are clear. Overall, this rifle rates in about Fine condition.

Mechanics: The action functions correctly. The trigger breaks crisply. We have not fired this rifle. As with all used firearms, a thorough cleaning may be necessary to meet your maintenance standards.

Box, Paperwork & Accessories: This rifle comes with a single 5-round magazine with floorplate marked “MADE IN U.S.A. / WINCHESTER / TRADE MARK / PAT. NOV. 25, 1919”. The magazine has moderate operational wear on the outside of the body with intact feed lips and a strong spring, in about Very Good condition.

Our Assessment: The Winchester Model 52 is a bolt-action .22-caliber target rifle introduced by the Winchester Repeating Arms Company in 1920. For many years, it was the premier small-bore match rifle in the United States, if not the world. Known as the “King of the .22’s,” the Model 52 has been called by Winchester historian Herbert Houze “a perfection in design”. The Model 52 was finally discontinued in the 1980s because it was costly to manufacture, and its popularity had lost way to expensive European rifles. The Model 52 underwent several changes over its life, and although different model names were not advertised and the barrel markings remained the same, letter suffixes were added to the serial number to designate significant design changes. This is a model 52B Sporting Rifle produced in May of 1938, right at the first anniversary of production of B model rifles. The B model incorporated an improved safety, mounted on the right of the receiver forward of the bolt handle, which could be operated without dismounting the rifle and which disengaged the sear from the trigger in addition to locking the firing pin in the cocked position. The B model would only be in production a few years until the United States entered WWII and production was given over to the war effort. This example is not only a pre-war rifle, it is early enough to still have a blued bolt handle, a feature which would be changed in 1939. The rifle is in about Fine condition with 96% of its metal finish, its original Lyman and Redfield sights, light wear in the stock, a bright bore, strong mechanics and a great trigger. This rifle will make a nice rifle for the lucky winner and a great addition to a Winchester collection. Please see our photos and good luck!