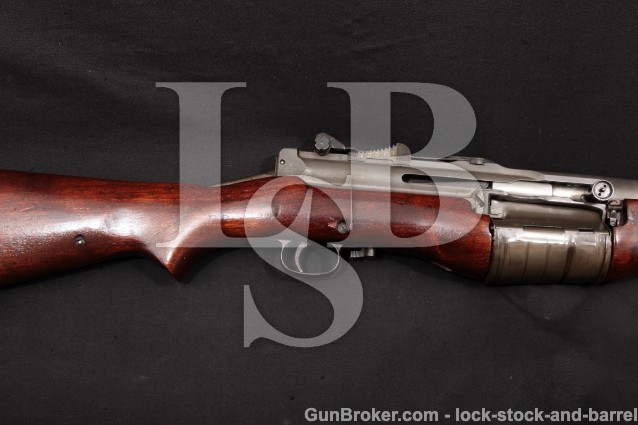 Markings: The top of the receiver is marked with patent information, the serial number “A1419”, “CAL. 30-’06 SEMI AUTO.” and “ “JOHNSON AUTOMATICS” / MODEL OF 1941 / MADE IN PROVIDENCE, R.I., U.S.A.”. The right rear of the receiver is marked “CRANSTON / ARMS / CO” in an inverted “triangle” with a small “star” above it. The “triangle” was a Dutch National symbol and the small “star” is a Dutch acceptance mark (page 251 of Bruce Canfield’s book, Johnson Rifles and Machine Guns). The bolt is marked “B6655”. Note: During the production of Johnson Model 1941 Rifles at the Cranston factory no attempt was made assemble rifles with matching part numbers (page 251). The barrel shank is marked “J” and with a small “star”. The face of the barrel collar is marked “.30-06” on top, “M” on the right and “41” on the bottom. The side of the barrel collar is marked “A”. The barrel shank lug is marked “3054G”.

Stock Configuration & Condition: The 2 piece oil stained hardwood stock has a pistol grip, several holes for mounting screws, channel under the forearm for the takedown lever, ventilated metal barrel shroud, 2 sling loops and a metal buttplate. The hole on the right front of the forearm is a takedown button. It can be pressed with the tip of a bullet to release the barrel takedown lever that is on the bottom front of the forearm. The forearm shows a few deep scrapes that have removed portions of the wood. The wood shows other scrapes, small scratches & compression marks. Some are deep and have damaged small portions of the surface wood. These marks have been oiled over. The LOP measures 13 1/8 inches from the front of the trigger to the back of the buttplate. The stock rates in about Very Good Plus overall condition.

Overall Condition: This rifle retains about 97% of its metal finish as refinished. The receiver & barrel shroud have been refinished. They show some discoloration from oxidation. The barrel & magazine show some light scrapes. The magazine also shows areas of discoloration from oxidation as well as a small dent on the bottom. The remainder of the finish shows small scrapes & handling marks. The screw heads show use. The markings are deep. Overall, this rifle rates in about Very Good Plus to Fine condition as refinished.

Our Assessment: This Rare Johnson Automatics Model 1941 looks impressive. It is well over 70 years old and still has deep & crisp stampings on the metal. The stampings on the metal parts tell a story about the rifle. They include a Dutch acceptance mark. The wood is in solid shape and the bore can still put a ton of .30-06 downrange. A limited number of these rifles were used by American troops during WWII and are prized by collectors.
If you are wondering how a Dutch Military Rifle is still in such nice shape; we may have the answer.
The following information can be found (with much more detail) on pages 73 to 87 and pages 216 to 223 of Bruce Canfield’s book, Johnson Rifles and Machine Guns: In July of 1940 the Netherlands (Dutch) placed an initial contract for 10,200 Johnson Model 1941 Rifles. At the time Johnson Automatics did not have the production capabilities to fulfill the contract. Johnson had to develop partnerships to fulfill production of the rifles. Johnson partnered with the Universal Winding Company of Cranston, Rhode Island to form the Cranston Arms Co.; hence the Cranston Arms Co. “triangle” stamping on all Model 1941 Rifles. The “triangle” was a Dutch National symbol… Johnson Automatics went bankrupt in 1949. Many of the left over Johnson Automatics spare parts and barrels were purchased by an importer who was also able to acquire surplus military M1941 Rifles that had been sold to the Dutch. The Johnson Automatics spare parts & barrels were used to put the surplus Dutch Johnson M1941 Rifles into working order. These rifles were then offered to the public by mail order from the late 1950’s into the late 1960’s. Many were offered in “as is” Military configuration while others where “Sporterized”. The Sporterized rifles featured new barrels made by the Apex Rifle Company of Sun Valley, CA.