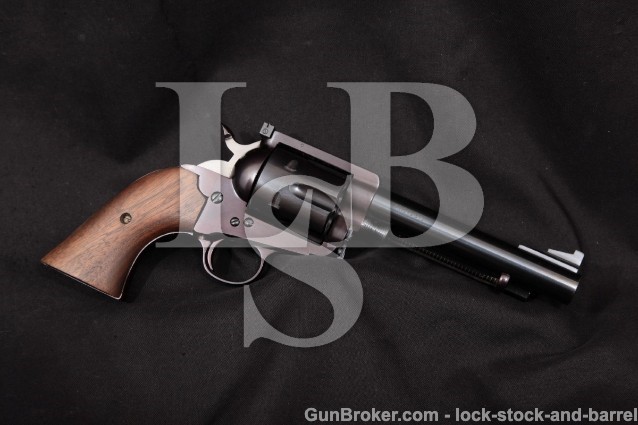 Markings: The top of the barrel is marked “GROVER’S IMPROVED NUMBER “FIVE””. The topstrap is marked “TEXAS LONGHORN ARMS, INC. / RICHMOND, TEXAS” and with a longhorn skull. The bottom of the receiver at the trigger guard is marked “K / 218”. The front of the cylinder is marked “K218” and the rear is marked “45”. The inside of each grip panel is stamped “K218”.

Sights / Optics: The front sight is a patridge blade integral to a base fixed to the front of the barrel. The rear sight is a square-notch leaf Micro adjustable for windage and elevation pinned to the topstrap.

Stock Configuration & Condition: The grips are two-piece smooth wood panels. They have no notable wear or damage, only light handling marks. There are no chips or cracks. Overall, the grips are in about Excellent condition.

Overall Condition: This pistol retains about 97% of its metal finish. There are scattered light marks, mostly on the outside edge of the ejector rod assembly and along the top-right of the barrel. The cylinder has a whisper of a turn-line, not through the finish. The hammer has light operational wear. The frame’s finish has a slight plum hue. The screw heads are sharp. The markings are clear. Overall, this pistol rates in about Fine-plus condition.

Mechanics: The action functions correctly. The cylinder has almost no play on each chamber. The trigger is crisp. The over-size basepin is retained with an ingenious latch system which is held in place with a sprung detent and rotates out of the way to release the base-pin. We did not fire this pistol. As with all used firearms, a thorough cleaning may be necessary to meet your maintenance standards.

Our Assessment: Bill Grover’s most famous sixgun, the Improved Number Five is Grover’s update of the Croft / Sedgeley “Number 5″ made famous by the great Elmer Keith. The grip frame combines a modified Colt Bisley backstrap with a Single Action Army frontstrap, resulting in its unique shape. Adjustable sights, a 5-1/2” barrel, and the elegant Number Five base pin latch complete the package. Grover called his version the “Improved Number Five” because of its modern springs and metallurgy, its larger frame size made to handle modern high-pressure big-bore cartridges such as the most commonly found chambering of 44 Magnum, and of course its famous “right-handed” design. Grover had a pet theory that Samuel Colt was left-handed, designing even his earliest revolvers for the caps to be installed on the nipples on the right side of the cylinder while holding the gun in the left hand. It was his contention that for right-handed shooters, a single-action revolver should have the loading gate and ejector rod on the left side, allowing the gun to be loaded and unloaded while still holding the grip in the right hand. Grover started Texas Longhorn Arms in 1987 and his revolvers were soon known for their exquisite quality and unique design, though not many were produced before the company closed in 1997. This is one such example of his Improved Number Five, chambered in the classic .45 Colt cartridge. Fans of Texas gunmakers, single action revolvers, and unique designs have a rare opportunity at a rare gun in this revolver. Please see our photos and good luck!