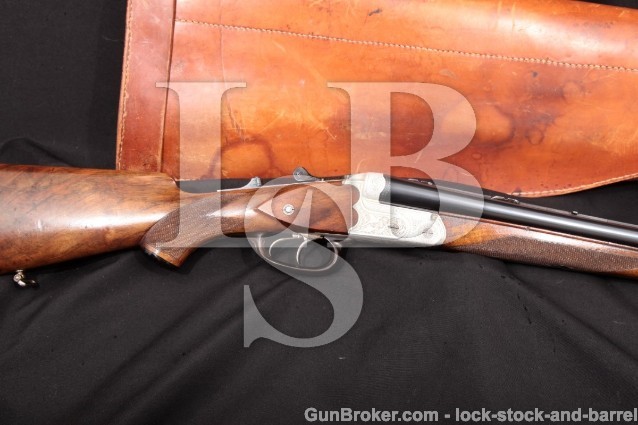 Sights / Optics: The front sight is a brass beaded blade in-line dovetailed to the front of the rib. The front sight base has a folding larger white bead which has a small rounded cut into which it folds when not in use. The rear sight is a folding “U”-notch leaf which automatically flips up when the rifle selector is engaged and down when it is disengaged in a base which is dovetailed and screw-secured to the top of the rib. There are two German-style bases dovetailed to the rib behind the rear sight for mounting a scope (none included).

Stock Configuration & Condition: The stocks are two-piece checkered select walnut with capped pistol grip, cheekpiece, serrated black horn buttplate, splinter forend and a sling swivel mounted in the belly (the other is mounted to the rifle barrel forward of the forend). The forend has a small gouge on the right at the top edge, a few scattered light marks, and some scattered dark residue buildup which should come out with a patient cleaning. The buttstock has some scattered light compressions, scratches, scuffs and drag lines with thinning finish on the wrist and the edge of the cheekpiece. The checkering shows handling wear but is well defined. There are no chips or cracks. The LOP measures 14 1/8″ and 13 1/8” from the fronts of the triggers to the back of the buttplate. The plate has some cracking at the bottom screw hole, a chip loss at the toe, a few other scattered very small losses and scattered light wear, in about Good-Very Good condition. The stocks are in about Very Good-plus overall condition.

Bore Condition: The bores are bright and the rifling is sharp. There is no erosion.

Overall Condition: This rifle retains about 96% of its metal finish. The barrels show only a few scattered light marks. The forend iron has some figuring of case-coloring left at the top on each side but is mostly worn to white on the exposed portion. The alloy receiver shows operational wear from the tang-mounted rifle selector and from the safety switch on the left of the wrist, otherwise showing only light handling marks. The screw heads are sharp and properly timed with the slots in line with the bores. The markings are clear. Overall, this rifle rates in about Fine condition.

Mechanics: The action functions correctly. There is a slider on the top tang which is pushed forward until it clicks to select the rifle barrel and flip up the rear sight. There is a button on the top of the slider which releases it from the rifle position under spring tension, take care to have your thumb behind the slider when disengaging the selector. NOTE: With the rifle barrel selected, the front trigger will fire the rifle barrel AND the rear trigger can still fire the left shotgun barrel. There are cocking indicators on the top tang to each side of the lever. The safety is a switch on the left of the wrist. We have not fired this rifle. As with all used firearms, a thorough cleaning may be necessary to meet your maintenance standards.

Box, Paperwork & Accessories: This shotgun comes in a brown leather “leg of mutton” case with buckle-strapped lids at each end, carry handle and shoulder strap. The exterior of the case has scattered light-moderate wear, discoloration from age and oil, scratches, scrapes and scuffs, light-moderate fraying on the straps, intact stitching, and wear on the interior from the contents. Overall, the case is in about Good-plus condition.

Our Assessment: Georg Immanuel Meffert first started his gunmaking shop in 1839 in Suhl, and the Meffert family continued their operations into World War II, but unfortunately their area of Suhl fell under the Iron Curtain after the war and their factory was nationalized by the East German regime. Meffert initially adopted the trademark “Hubertus” after Saint Hubertus, the German patron saint of hunting and this model “Wotan” derives its name from the Germanic form of the Old Norse god Odin. This Wotan was produced in 1941 which is quite interesting for a German sporting gun. Some references note that Meffert had their production given over to the war effort and stopped producing sporting guns during the war, however the “541” date code clearly indicates that the gun was produced in 1941. We are convinced, however, that it was produced in 1941 as evidenced by another Hubertus Wotan sold at auction in Austria, serial number 66012, which was listed as being proofed in 1940 (https://auctions.springer-vienna.com//Cms/Files/fe993d40-2675-4e53-89eb-61f0cab4762e ; page 8). It is a fantastically lightweight drilling at 6 1/4 lbs. and still shouldn’t beat the shooter up very badly, chambered as it is for 16 gauge and 7x57mm Rimmed. In its high condition and with its interesting history, this would make a great piece for drilling or fine European firearms collectors. If it gets past the collectors, this is a gun which can hunt just about anything outside of Africa and look good doing it. Please see our photos and good luck!

CA Legal or CA Private Party Transferable: This C&R eligible drilling CAN be transferred/sold in California.

The left barrel is choked Improved Cylinder, the right Modified. Both are fixed-choked.