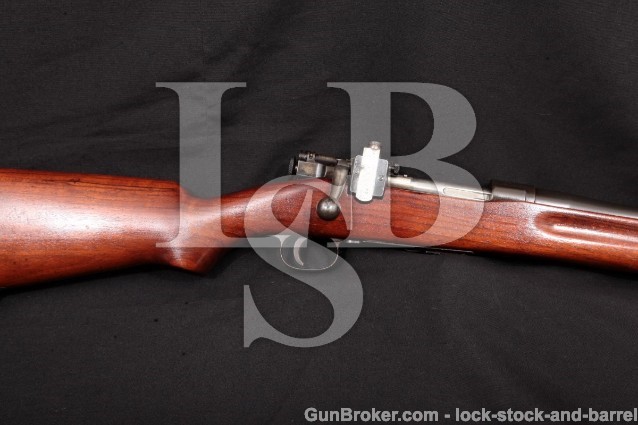 Sights / Optics: The front sight is a pinned blade atop a raised base. The rear sight is fully adjustable Lyman aperture marked “0 25 50 75 100 125”. The right side of the rear sight shows a spot of pin prick surface erosion.

Stock Configuration & Condition: The hardwood stock has a pistol grip, finger grooves, barrel band with sling loop, sling loop under the butt and a checkered metal buttplate. The left side of the stock shows a ½ scratch next to the bottom metal. The top of the butt shows a few small deep scrapes next to the buttplate. The wood shows other light scrapes & scuffs. Most of these marks have been oiled over. The LOP measures 13 1/4 inches from the front of the trigger to the back of the buttplate. The stock rates in about Fine Plus overall condition.

Bore Condition: The bore is bright; semi bright at the muzzle. The rifling is crisp. There is no erosion.

Overall Condition: This rifle retains about 96% of its metal finish. The front sight & band show scrapes & thinning. The meat shows various light scrapes & scuffs. The screw heads are intact. The markings are deep. Overall, this rifle rates in about Fine condition.

Box, Paperwork& Accessories: The rifle comes with an M2 magazine. For a photo see page 275 of Lt. Col. William S. Brophy’s book, The 1903 Springfield Rifles. It shows some light scrapes. It is in about Very Good Plus to Fine condition.

Our Assessment: Starting in 1922, Springfield Armory was directed to work with the National Rifle Association (NRA) to develop a .22 caliber rifle that could be used by Office of the Director of Civilian Marksmanship (DCM) affiliated rifle clubs and by Reserve Officer Training Corps (ROTC) shooting teams. The result was the M1922 Rifle. After several upgrades, the final configuration & designation of the M1922 .22 Caliber Rifle is the M2. The M2 was used by the military and sold to the civilian market.
This M2 was originally produced sometime between 1933 and 1940. After WWII it was Arsenal Rebuilt at Springfield Armory using a 1942 dated Springfield barrel (the last year of M2 parts production). The bore is strong & bright, the metal finish is nice, the wood is in great shape and the markings are clear & deep. The stock even has a Springfield Armory Arsenal Rebuild cartouche stamped on it. This is on Fine M2 rife. The Springfield M2 has become a desired collector’s piece. This Rare rifle will add nicely to your Military collection.
Note: Production of M2 parts continued until 1942 with all of the post 1940 production going to the military. Barrels manufactured in 1942 were slightly shorter than pre 1942 M2 barrels and had counter sunk muzzles. Barrels dated 1942 were used in large quantities to rebarreled rifles that were Arsenal Refurbished during and after WWII.
For more information on the Model 1922 Trainers see pages 50 to 55 of Joe Poyer’s book, The M1903 Springfield Rifle and its Variations, 3rd Edition. Good luck.