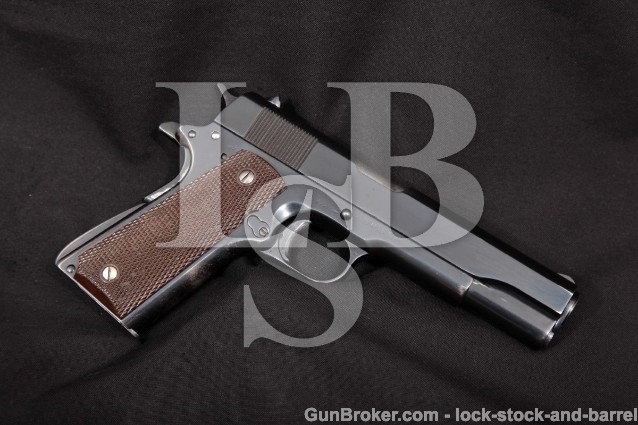 Stock Configuration & Condition: The grips are checkered reddish brown plastic. The checkering shows light wear with a few tiny mars. The grips are about in Fine Plus condition.

Type of Finish: The pistol has a bright blued finish.

Bore Condition: The bore is gray with light to moderate wear in the rifling. There is moderate erosion in the grooves scattered throughout the bore with very light erosion in the lands.

Overall Condition: This pistol retains about 86% of its current metal finish. There is pinprick surface erosion in the front strap with a spot on the grip safety. There are grinding marks under the finish on the webs of the trigger guard, dings on the sides of the trigger, a deep ding on the right side of the frame above the trigger. There are drag lines through the finish on the lower portions of the slide from rubbing on frame, a few marks through the finish on the left side of the slide, drag lines and spots of finish loss in the left side of the frame at the slide release, and light handling marks in the front strap. There are spots of finish loss on the sides of the grip safety and on the front strap with finish loss on the right side of the mainspring housing, the right rear edge of the frame and the front edges of the slide and frame. The slide serrations are sharp and the mainspring housing serrations and the magazine release knurling show light wear. The knurling on the recoil spring plug shows very light wear. The screw heads are sharp. Some of the markings on the right side of the frame have been ground off. Overall, this pistol rates in about Very Good condition as refinished.

Mechanics: The trigger pull is crisp. There is a very slight side-side play between the slide and the frame. This pistol has manual and grip safeties, and this model does not have a magazine disconnect. The action functions correctly. We have not fired this pistol. As with all used firearms, a thorough cleaning may be necessary to meet your maintenance standards.

Box, Paperwork & Accessories: This pistol comes with a single blued 7 round magazine with a floorplate marked “C-S” and the top of the lip marked “S”, indicating the magazine was made by Scoville during WWII, who was a subcontractor to Colt, Ithaca and Remington Rand. The magazine shows minimal wear and the markings are crisp. The magazine is in about Excellent condition. The lanyard ring on the bottom of the mainspring housing has been removed.

Our Assessment: The 1911 and 1911-A1 pistols served the military of the United States from 1911 to 1985, through two World Wars and the Korean and Vietnam wars. They gained a reputation as a reliable handgun with plenty of stopping power, and are held in high regard by those who have used them. This is a 1911-A1 pistol made by Remington Rand in 1944 during WWII. It is correctly marked for a Remington produced pistol, with a barrel made by the Flanner Bolt Co. and a magazine made by Scoville, both companies being subcontractors to Remington Rand. The pistol has been refinished and is in about Very Good condition with about 86% of its current finish remaining. The bore is gray with light to moderate wear in the rifling and light to moderate erosion in the bore. In his book “Colt .45 Service Pistols”, page 313, Clawson indicates that by the end of the war, Remington Rand produced the lowest cost pistol and that “during 1944 and 1945 they produced a superior weapon, equal to or better than those produced by other companies”. This says a lot for Remington Rand, despite having a few problems in the early part of 1943 as they tried to ramp up production. This pistol should garner interest by the collectors of WWI and WWII pistols even though it has been refinished. If they don’t show enough interest, this pistol will be great for home protection and for Wild Bunch competitions at your local SASS club.