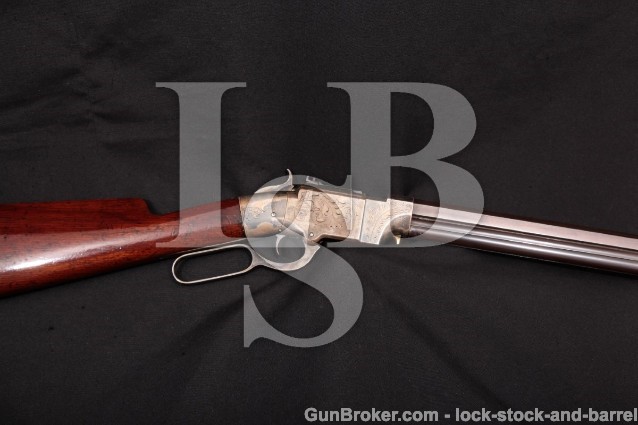 Caliber: Volcanic No. 2 Pistol Cartridge (.41 caliber bullet with hollow base filled with propellant and capped with an iron anvil, fulminate priming pill and covered with a cork base)

Markings: The top of the barrel is marked “NEWHAVEN CONN. PATENT FEB.14.1854”. The left of the bottom tang is marked “H” and “2278”, the right is marked “29” found again on the inside of the buttplate at the heel and on the rear face of the buttstock under the plate. The frame, sideplates and buttplate have decorative engraving.

Sights / Optics: The front sight is a blade screwed to the front of the barrel. The rear sight is a leaf with a small “V”-notch dovetailed to the rear of the frame which is dial-adjustable for elevation.

Stock Configuration & Condition: The stock is a one-piece smooth walnut with straight grip and silver-plated gunmetal crescent buttplate. The stock has scattered compressions, drag lines and scratches, all darkened with age. There are no chips or cracks. The wood is generally well fit to the metal, slightly shy in some spots at the receiver and tangs. The LOP measures 13 3/4″ from the front of the trigger to the back of the buttplate. The plate’s silver finish has gone dark with tarnish with thinning and wear at edges and some moderate-depth impact marks in the crescent, in about Good-Very Good condition. Overall, the stock is in about Very Good condition as likely refinished Antique.

Finish Originality: We aren’t sure. The sideplates do not display the perfect fit to the receiver that we typically see on Volcanics, however the engraving matches up properly between the sideplates and the receiver. The impact marks in the buttplate appear to be under the finish, but with the softness of brass this is not impossible to accomplish. The silver finish’s tarnish appears appropriate for the age and the markings are clear and visible. The lever and hammer’s case-coloring is nice, but if not exposed to significant amounts of sunlight, that would not be unexpected. We lean toward Original but we cannot be sure.

Bore Condition: The bore is gray and the rifling is sharp where not interrupted by erosion. There is scatterd light erosion in the bore with more toward the muzzle-end and there is a ring of more moderate erosion approximately 6″ from the muzzle.

Overall Condition: This rifle retains about 55% of its metal finish. The finish is thinning at all edges. The barrel and magazine tube have mostly gone to a light patina though there is scattered visible finish with a few spots of solid erosion. The receiver and sideplates have dark tarnish in most of their remaining silver finish with scattered light wear through the finish. The receiver and sideplate each have a patch of light impact marks at the bottom-rear on the left with the sideplate haveing a few notches at the bottom edge toward the front. The hammer and lever retain surprisingly strong case-coloring with light operational wear. The screw heads range from sharp to lightly tool marked with strong slots. The markings are clear. Overall, this rifle rates in about Very Good-plus condition as Antique.

Mechanics: The follower can be pushed far enough back to rotate the loading gate for loading, however the gate is hanging up on something preventing it from being rotated fully to the side. Otherwise, the action functions correctly. The rifle is operated by pulling the hammer to the rear, then operating the lever. The ejection port has semi-circle cuts at the front, square on the sides and rear. The bolt has a single hooked extractor. We did not fire this handgun. As with all used firearms, a thorough cleaning may be necessary to meet your maintenance standards.

Our Assessment: The Volcanic pistols and carbines have a distinct place in the history of firearms development, and were related to a number of major players in early American repeating arms including Horace Smith and Daniel Wesson who originally took up production of an improvement on the original Hunt “Volition” repeating carbine, Oliver Winchester who was an investor when the Smith & Wesson Company changed over to the Volcanic Repeating Arms Company, and Benjamin Tyler Henry who was hired as plant superintendent after the reorganization as the New Haven Arms Company. Henry’s tinkering with the design would culminate in the Model 1860 Henry, one of the first practical repeating rifles in history. This is a New Haven Arms “Volcanic” Carbine. Approximately 1000 of the Carbines were produced from 1857-1860, making them quite rare. All of the Volcanic firearms are considered highly collectible due to their place in the development of the 1860 Henry, 1866 Yellowboy, 1873 and 1876 rifles as well as its influence on the course of both Smith & Wesson and Winchester. This example is in Very Good-plus condition with about 55% of its finish and quite strong mechanics for a 150+ year old gun which had a fairly complex and novel design for its time. Interestingly, this rifle is marked with a serial number on the left of its tang, but the buttplate and stock are marked with an assembly number “29” which is also marked on the right of the bottom tang. Another interesting feature is the front sight which looks more like one from a Volcanic pistol than a carbine. Any dedicated Winchester collector ought to have at least one Volcanic in their collection and given the influence of this design, it would be a great addition to any collection. Please see our photos and good luck!

CA Legal or CA Private Party Transferable: This Antique rifle CAN be transferred in California.