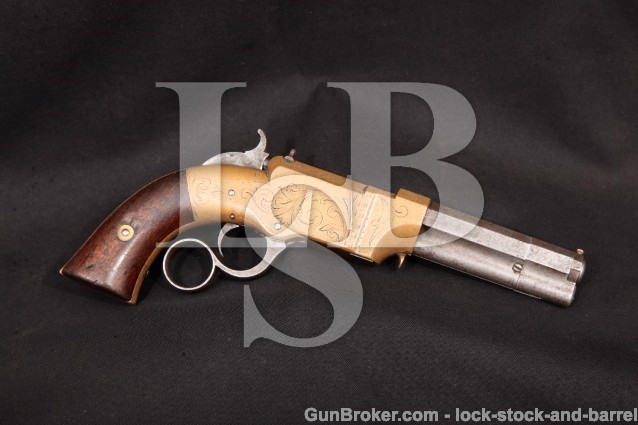 Caliber: Volcanic No. 1 Pistol Cartridge (.31 caliber bullet with hollow base filled with propellant and capped with an iron anvil, fulminate priming pill and covered with a cork base)

Markings: The top of the barrel is marked “NEWHAVEN CONN. PATENT FEB.14.1854”. The left of the grip frame at the butt is marked “1574”, found again stamped on the inside of each grip panel toward the top. The magazine follower, visible when the magazine is opened for loading, is marked “574”. The frame has decorative engraving.

Sights / Optics: The front sight is a brass blade screwed to the front of the barrel. The rear sight is a rounded-top “V”-notch dovetailed to the rear of the frame.

Stock Configuration & Condition: The grips are two-piece smooth walnut panels. Both panels have scattered compressions, scuffs and thinning finish with a more notable bruise at the top of the right grip screw escutcheon and a small loss at the bottom-rear corner of the right panel. There are no cracks. Overall, the grips are in about Very Good condition as Antique.

Finish Originality: The pistol does not appear to have been refinished, however the brass frame shows signs of polishing in the distant past.

Bore Condition: The bore is semi-bright and the rifling is sharp. There is infrequen light erosion in the bore.

Overall Condition: This handgun retains about 5% of its metal finish. Finish remains in protected areas such as the radius between the barrel and magazine tube at the frame and the underside of the hammer spur. The remainder of the steel surfaces show scattered light surface oxidation with a few light nicks and scratches. The brass surfaces have a mustard-color patina and the almost crystalline look of old brass with darker tarnish around the rear sight, lever, and trigger. The engraving on the frame has slightly soft edges as from being polished in the distant past. The screw heads range from sharp to lightly tool marked with strong slots. The markings are clear. Overall, this handgun rates in about Very Good-plus condition as Antique.

Mechanics: The action functions correctly, however the magazine spring feels quite weak. The pistol is operated by pulling the hammer to the rear, then operating the lever. The lever must be pushed all the way forward for the lifter to come up far enough to allow the bolt forward. The ejection port has semi-circle cuts at the front and rear, square on the sides. The bolt has a single hooked extractor. We did not fire this handgun. As with all used firearms, a thorough cleaning may be necessary to meet your maintenance standards.

Our Assessment: The Volcanic pistols and carbines have a distinct place in the history of firearms development, and were related to a number of major players in early American repeating arms including Horace Smith and Daniel Wesson who originally took up production of an improvement on the original Hunt “Volition” repeating carbine, Oliver Winchester who was an investor when the Smith & Wesson Company changed over to the Volcanic Repeating Arms Company, and Benjamin Tyler Henry who was hired as plant superintendent after the reorganization as the New Haven Arms Company. Henry’s tinkering with the design would culminate in the Model 1860 Henry, one of the first practical repeating rifles in history. The No. 1 Pocket Pistol was a new model added when the company was reorganized as the New Haven Arms Company with a shorter 3 1/2″ barrel (though the nominal length use in advertising was 4″). Approximately 850 of the Pocket Models were produced from 1857-1862, making these pistols quite rare. All of the Volcanic firearms are considered highly collectible due to their place in the development of the 1860 Henry, 1866 Yellowboy, 1873 and 1876 rifles as well as its influence on the course of both Smith & Wesson and Winchester. This example is in Very Good-plus condition with serial-matching grips, a surprisingly nice bore, and quite strong mechanics for a 150+ year old gun which had a fairly complex and novel design for its time. Any dedicated Winchester collector ought to have at least one Volcanic in their collection and given the influence of this design, it would be a great addition to any collection. Please see our photos and good luck!

CA Legal or CA Private Party Transferable: This Antique handgun CAN be in California.