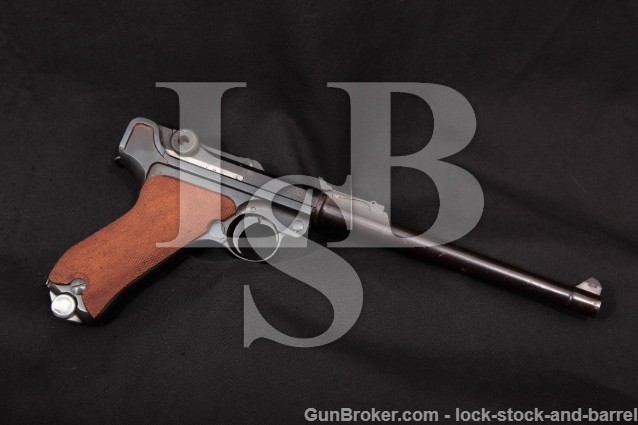 Sights / Optics: This pistol is mounted with a  blade front sight that is dovetailed into a base on the front barrel band and has a serrated and ramped rear face. The “Fine Tuning”  tangent artillery rear sight is flat topped with a “V” notch and the elevator has graduated markings from 1-8. The slider is missing.  The rear sight has a fine adjustment for elevation.

Stock Configuration & Condition: The grips are checkered walnut, and the right grip is slightly loose on the frame. The checkering is sharp and shows no mars. The grips rate in about Fine overall condition.

Type of Finish: The pistol is blued with the ejector “In The White”.

Finish Originality: The finish on the pistol has been professionally restored.

Bore Condition: The bore is bright with very light wear in the rifling. There are a few spots of moderate erosion at the very front of the bore at the muzzle.

Overall Condition: This pistol retains about 92% of its current finish. There are spots of pitting in and under the finish scattered over the surfaces with deep pitting in the underside of the barrel. There is also some rust under the lanyard ring at the back of the frame and a light mark in the left rear of the frame from the safety. The serrations and knurling on the toggle knobs show light wear and are marred by erosion. The grip screws are sharp. The markings are shallow and some have been removed by grinding/polishing. Overall, this gun rates in about Good to Very Good condition as professionally restored.

Box, Paperwork & Accessories: This pistol comes with a total of one blued magazine with an aluminum bottom piece. The bottom piece is marked “9593 / x” and with an “Eagle / 655” Waffenamt, indicating it was made by Mauser Werke in 1940-1941. The body shows spots of finish loss, a few spots of pinprick surface erosion and light wear. The bottom piece shows a large bruise on its bottom right grasping ring. The magazine is in about Good to Very Good overall condition.

Our Assessment: This Artillery version of the Luger pistol is also known as the “Long Barrel P.08”. It was the first Luger to use the 32-shot snail magazine. Many of the Artillery Models were equipped with “Fine Tuning” front and rear sights, which were auto-calibrating for windage drift due to bullet spin, making them second to none in long range accuracy. This pistol is a Model 1914 DWM Artillery Luger made in 1917. It has matching serial numbers on some of its parts but several are missing numbers and the magazine is from a different pistol. The proof and acceptance markings are correct. This pistol has the fine-tuning rear sight, which makes it all the rarer, as all artillery models were not so equipped, but the ladder is missing its slider. This pistol is in about Good to Very Good condition as professionally restored, with about  92% of its current finish remaining. The bore is bright with very light wear in the rifling, but there are spots of moderate erosion at the very front of the bore. The artillery models are always collectable: they are a very interesting looking weapon that almost everyone wants to own, and there were far fewer of them than the other Luger variations. This pistol looks nice and will display well from a distance.