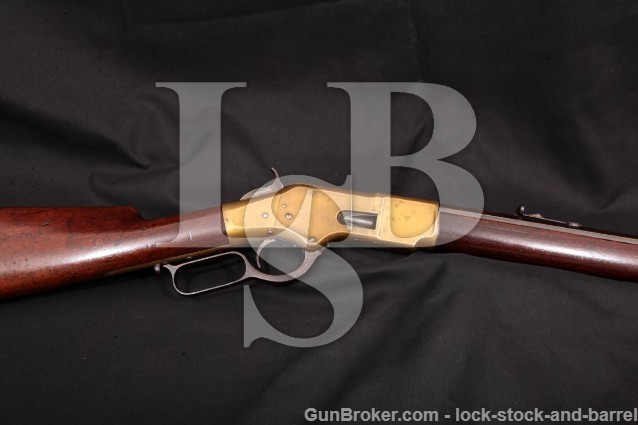 Barrel Length: The octagon barrel is 24 3/8” in length and has a nearly full-length magazine tube.

Sights / Optics: The front sight is German silver blade held in a slotted rectangular base fixed to the barrel. The rear sight is a “V” notched elevator sight dovetailed into the top of the barrel. The upper tang has two drilled, tapped and filled holes for an aperture sight.

Stock Configuration & Condition: The stocks are two-piece walnut with a lacquered finish. The buttstock has a straight grip and a brass carbine style buttplate. There is a trapdoor in the buttplate for storage of cleaning equipment in the buttstock. The forend runs about half the length of the barrel and is secured with a brass nosecap. The wood is dark with oil staining at the front of comb, at the front and rear of the forend, and in spots along the top left edge of the forend. The wood is slightly shy of the metal at the front of the upper and lower tangs, but in general, the fit is very good. There are multiple old dings and bruises scattered over the stocks that are dark with oil staining. There are also a few small gouges and scratches from sanding under the finish. There is a drag line in the left side of the buttstock and several light marks in the current finish. The LOP measures 13 3/8” from the front of the trigger to the back of the buttplate. The buttplate shows flat bruises at the heel and toe, several small dings and scratches from sanding under its mustard colored patina. The buttplate is in about Very Good overall condition. The stocks rate in about Very Good overall condition as refinished.

Type of Finish: The barrel, magazine tube, loading gate and lever are blued with a light coating of brown lacquer. The receiver is brass. The hammer and trigger have their original case colored finish.

Finish Originality: We think the steel parts were refinished with bluing in the distant past, with a dark patina forming in some areas, before a light coat of varnish was added.

Bore Condition: The bore is dark with moderate wear in the rifling. There are spots of moderate erosion from the muzzle back a several inches.

Overall Condition There is moderate erosion under the finish of the magazine tube and its hanger, with scattered light erosion and scratches from sanding under the finish of the barrel and light erosion under the finish of the lever. There is lacquer finish loss at the front of the barrel and magazine tube, and on the magazine hangar, with lacquer and bluing loss on the edges of the barrel, and bluing loss only at the back of the barrel. Please see our pictures to get a better impression of the finishes. The receiver has developed a mustard colored patina and shows several dings and light scratches from sanding, tiny dings and drag lines in the left rear, and dark spots of tarnish at the right front. The lever shows thinning of its lacquer finish and a few light marks. The hammer knurling shows light wear with heavy wear on its back edge. The sideplate, hammer and lever and lifter spring screws are disfigured. The markings are shallow. Overall, this rifle rates in about Good condition.

Mechanics: The bolt doesn’t move when the hammer hits it and we can’t push on it hard enough to get it to move once the lever is closed. Otherwise, the action functions correctly and the hammer has a half-cock safety. We have not fired this rifle. As with all used firearms, a thorough cleaning may be necessary to meet your maintenance standards.

Our Assessment: The Model 1866 rifle was the first firearm to be built by the new Winchester Arms after they changed their name from the New Haven Arms Company in 1866. The Model 1866 was a much-improved version of the Henry rifle, with a loading port on the right side of the receiver featuring a spring-loaded cover, through which cartridges could be fed into a new solid magazine tube that was much stronger than the slotted tube used on the Henry. The M1866 was made in rifle, carbine and musket versions and in four different models dependent on date of manufacture. All of the different models were chambered in .44 Henry Rimfire, with some of the later 4th Models chambered in .44 Henry Centerfire. This rifle is a Model 1866 Rifle with a 24 3/8” octagon barrel and still has its original rimfire bolt. However, the bolt won’t move when the lever is closed, and we suspect a buildup of crud on the internal links – in any event, we think it would be unsafe to slam the lever closed assuming one could find .44 Rimfire ammo. Otherwise, the rifle is in about Good condition. The bore is dark with moderate wear in the rifling and spots of moderate erosion from the muzzle back several inches. All of the 1866 models are very collectable due to their age and the relatively short time period over which they were made: the M1866 was made up until the 1890’s, but very few were made after the 1873 rifle was introduced with its improved center fire cartridges. Most Winchester collectors would never think that their collection was complete without at least all three variations of the M1866, while some would argue for all the variations of the four different models. Please see our pictures and good luck in your bidding.

We removed the stock and buttplate showing assembly number “109” on the left of the bottom tang. “109 is also marked on the top tang inlet on the buttstock’s wrist under “3151”. “3151” is also marked at the toe of the buttplate. Marking of the last four digits of a serial number on the buttplate took place ca. SN 23,000-60,000, however marking of the assembly number was typically in the center of the inlet. The two markings on the wrist were clearly placed with room for one another. It is unclear if this is parts cleanup or a forced match. Please see photos uploaded for these markings.