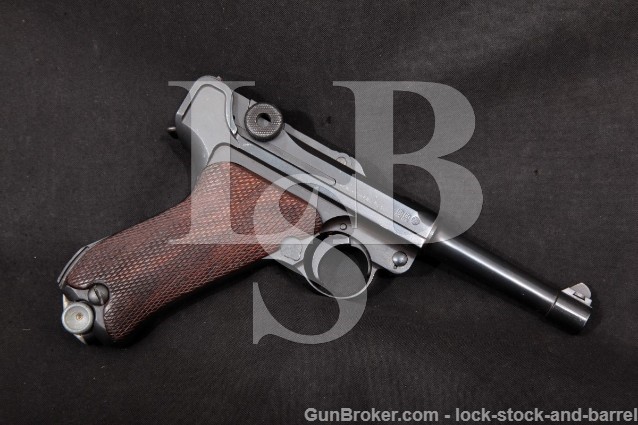 Stock Configuration & Condition: The grips are checkered walnut that are dark with oil staining. The checkering shows heavy wear with a few small dings. The grips are tight on the frame. The grips are in about Good to Very Good condition.

Type of Finish: The entire pistol is blued.

Finish Originality: The pistol has been refinished.

Bore Condition: The bore is bright, with sharp rifling. We didn’t see any erosion in the bore but there are tiny spots of lead fouling scattered throughout the bore that we couldn’t get out with a bronze bore brush and Hoppe’s.

Overall Condition: This pistol retains about 98% of its current metal finish. There is light pitting under the finish on most surfaces except for the barrel, scratches from sanding under the finish on the left sideplate, breechblock, receiver, and the sides of the frame and trigger, and tiny dings under the finish in the left sideplate. There is thinning on the front corners of the frame rails and light handling marks scattered over the surfaces. The serrations on the toggle knobs are distressed, and the knurling on the knobs and small parts and the safety serrations show light wear. The left grip screw is distressed. The markings are clear except for the import mark which was badly stamped, and those on the underside of the barrel are crisp. This pistol rates in about Very Good condition as refinished.

Our Assessment: The Luger (Pistole Parabellum) is perhaps the most aesthetically and ergonomically pleasing of all autoloading centerfire pistols. It is also one of the strongest, most accurate and most recognizable service pistols ever made. The Germans used a variety of markings on their guns, and used Waffenamt markings for acceptance stamps on military pistols starting in the and started using Waffenamts in 1934 for acceptance stamps by the military after the Nazis took power in 1933. However, the Waffenamt was officially founded in 1919, and used on Luger pistols destined for police use. Early Waffenamts used a dove instead of the Weimar Eagle over the inspector’s number. For more on this topic, please see “Weimar and Early Nazi Lugers”, pgs. 1-42, by Jan C. Stills. This pistol is a 1920 Police pistol, also referred to as a Dated Alphabet DWM Police pistol due to its 4 digit serial number with letter suffix and the 1921 Reichswehr date stamp on the receiver’s chamber ring. It has been refinished and there is an import mark on the receiver, but its serial numbers are matching, including the magazine, except for the grips. The pistol has a 4” barrel, is chambered in 9mm Parabellum, and has a Prussian Police Unit number stamped on its front strap. The pistol is in about Very Good condition with about 98% of its current finish remaining. We see lots of Lugers come buy our shop, but this is the first dated police pistol we have seen in years. Stills indicates that as many as 45,000 could have been made, but even this number pales in comparison to those made for the Army or for commercial sales. This rare Luger is sure to get picked up by a collector interested in filling out his/her collection with a Prussian Police model.