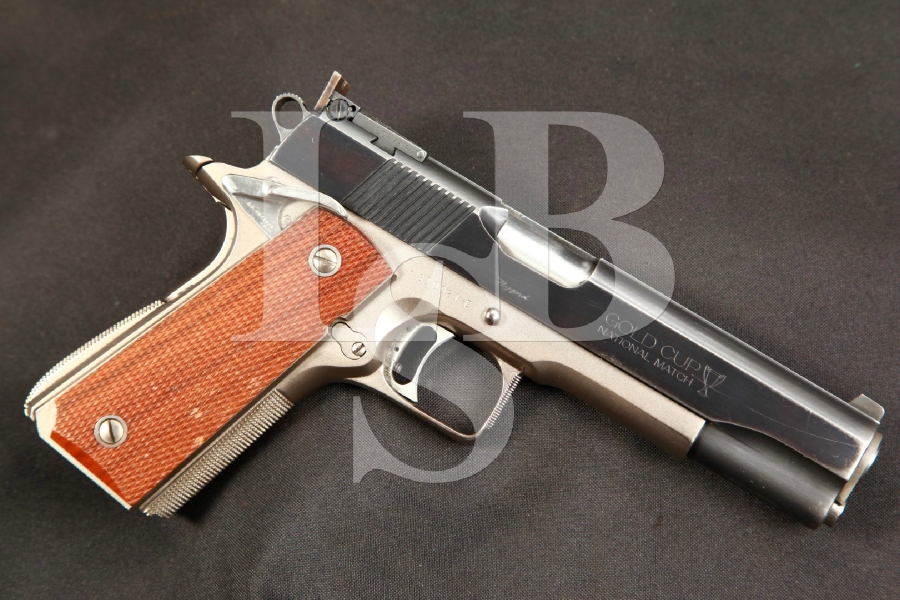 SOLD FOR: $1,355
LSB#: 150313DS04
Make: Colt’s PT. F.A. MFG. Co.
Model: Custom 1911A1
Serial Number: 310921-C
Year of Manufacture: 1967
Caliber: .45 ACP
Action Type: Single Action, Semi-Automatic with Removable Magazine
Markings: The right side of the frame is marked “310921-C”. The left side of the trigger guard bow is marked “S” and a Triangle “VP” proof. The left side of the slide is marked “COLT’S MK IV / SERIES ’70 / GOLD CUP NATIONAL MATCH / .45 AUTOMATIC CALIBER”, with a Rampant Colt and “Nygord” in etching pencil. The right side of the slide is marked “GOLD CUP / NATIONAL MATCH” and a Trophy Cup. The barrel is marked “BAR STO 45 ACP”.
Barrel Length: A 5” Bar Sto barrel has been fitted to this pistol.
Sights / Optics: The front sight is a blue serrated blade fixed to the slide. The rear sight is a Bo-Mar square notched leaf with a grooved rear face, dovetailed to the slide, adjustable for windage and elevation.
Stock Configuration & Condition: The grips are two piece walnut, checkered over the entire surfaces. The points of the checkering are moderately flattened from use and several diamonds are broken on the right panel. The grips rate in about Very Good to Fine overall condition.
Type of Finish: The slide is blue, the frame is Electroless Nickel.
Finish Originality: The finish on the slide is original, the frame has been refinished.
Bore Condition: The bore is bright and the rifling is sharp. There is no erosion in the bore.
Overall Condition: This handgun retains about 85% of its current metal finish. Finish thinning to bare metal is visible at the front edges of the slide. A scratch is present on the forward right side of the slide and a shallow scratch is apparent on the left side of the slide. Handling marks consistent with strong use are evident on the slide and frame, but no signs of abuse can be seen. Significant customization has been performed. The trigger has been skeletonized and the hammer ring has been drilled out and checkered. The front of the trigger guard bow has been flattened and checkered and front face of the grip and checkering has been cut onto the front of the grip and the mainspring housing. The screw heads are sharp. The markings are shallow. Overall, this handgun rates in about Very Good condition.
Mechanics: The action functions correctly. The custom work was performed by Don Nygord. The trigger and hammer have been skeletonized, a Bar Sto barrel has been installed and a full length guide rod is present. Swenson ambidextrous safeties have been added and the beavertail has been filed. The trigger pull measures a light 2lb. 15oz. No magazine is included. We did not fire this handgun.
Box, Paperwork & Accessories: None
Our Assessment: This is a match grade Colt 1911, built on a customized Commercial frame and fitted with a MK IV, Series 70 Gold Cup National Match slide. The custom work was performed by Don Nygord, a national champion shooter and renown custom gun smith. From http://www.spyderwebmaster.com/don_nygard.htm:”Don has been shooting for over 30 years and for 22 straight years was a member of the US Shooting Team competing in Olympic style pistol shooting all over the world. He has been National Champion 16 times, was a member of the 1984 and 1988 US Olympic Teams, and was World Champion in air pistol with a score only two points off the World Record at that time. He is the current holder of the US Free Pistol record at 574—a record that has stood for over a decade!—and has held over 40 other National Records.” The pistol features a skeletonized hammer and trigger, checkering, on the front of the trigger guard bow and both surfaces of the grip frame, a full length guide rod, ambidextrous Swanson safeties, a Bar Sto barrel and a Bo-Mar adjustable rear sight. This pistol is definitely a shooter. It is in Very Good condition, showing signs of heavy use, but no signs of abuse. No magazine is provide with this pistol. This is an excellent out of the box completion 1911.