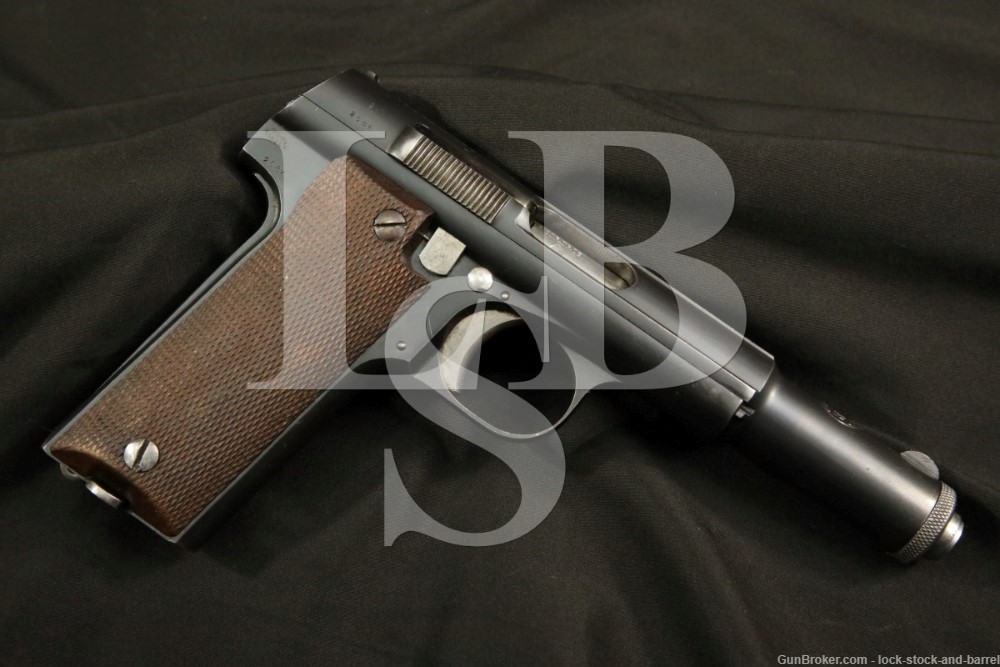 Action Type: Single-Action Semi-Automatic Pistol with 8-Round Detachable Magazines and a Grip Safety

Stock Configuration & Condition/ Grip: The grips are two-piece checkered wood panels with a lanyard ring and magazine release on the left side. The grips have minor handling wear which includes small scuffs and nicks. There are no cracks or chips. The checkering remains mostly sharp. Overall, the grips are in Very Good condition.

Bore Condition: The bore is mostly bright and the rifling is sharp. There is light erosion concentrated in the grooves.

Overall Condition: The pistol retains about 75% of its metal finish. There are some light scuffs, nicks and handling marks. Notably, the finish has worn off the leading edges. The markings remain clear. The screwheads have light toolmarks and remain serviceable. Overall, the pistol is in Very Good condition.

Mechanics: The action functions correctly. The slide to frame fit is snug. We did not fire this pistol. As with all used firearms, thorough cleaning may be necessary to meet your maintenance standards.

Box Paperwork and Accessories: The pistol comes with a single 8-round magazine. The magazine has Astra markings and only light handling wear. Overall, the magazine is in Very Good condition.

Our Assessment: The Astra 600 was produced from approximately 1944-1945 by Francoist Spain for Germany during the later stage of WWII.  Once France had been liberated by the Allies, Spain lost its ability to transfer goods to the Reich which left a surplus of model 600s sitting in storage. Some of these pistols were sold to Turkey, Portugal, Chile and Costa Rica but the bulk were resold to West Germany after WWII where they remained in service until the late 1960s. The dwindling stock which remained in the late 1960s were acquired by Interarms, an American gun company run by Samuel Cummings who had ties with the CIA, which brought them to the civilian market in the United States.

This pistol was transferred to Germany during WWII, this is indicated by the waffenamt on the right side of the frame. These handguns were purportedly supplied primarily to the Luftwaffe (German Air Force) but many also made their way to the Heer (German Army), and the Spanish pistol proved a popular sidearm throughout the Wehrmacht. The pistol remains aesthetically pleasing, it is still mechanically sound and it should ultimately prove a worthy companion to its next owner. This is certainly a great option for historical firearms collectors. Good luck on your bid!