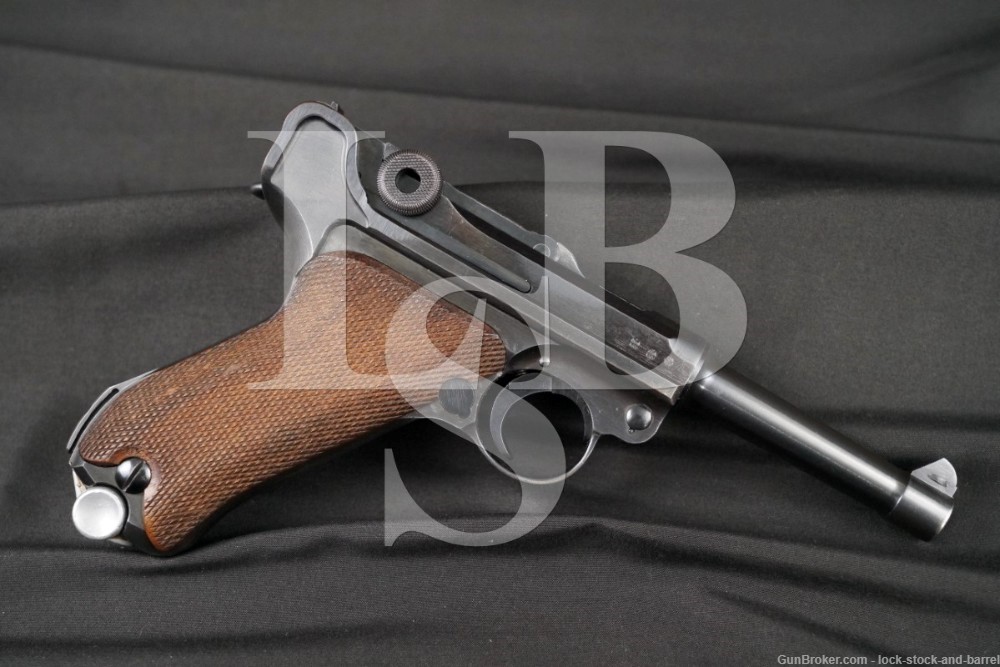 Stock Configuration & Condition/ Grip: The grip panels are two-piece checkered wood. The grip panels have only a few light handling marks, nicks and scuffs.. The checkering remains sharp. There are no chips or cracks. Overall, the grips are in Fine condition.

Bore Condition: The bore is mostly-bright with sharp rifling. There is some very light erosion concentrated in the grooves.

Overall Condition: The pistol retains about 75% of its metal finish. There are some light-moderate handling marks, nicks and scuffs. Notably, there is finish loss around the muzzle, finish loss along the leading edges and some light surface oxidation visible where the finish has worn off (this is particularly noticeable on the grip straps. The markings remain clear. The screwheads have light tool-marks but they remain serviceable. Overall, the pistol is in Very Good condition.

This particular Luger was manufactured in 1937 four years after the NSDAP came to power in Germany and two years before WWII broke out. The pistol’s Waffenamts are consistent with army issued small arms from 1937 and the parts all appear to be original. The S/42 marking would remain in use by Mauser until 1939 when it was replaced by a plain “42” which was used until the “byf” marking was introduced in 1941 that remained in use until the end of WWII. The gun remains an aesthetically pleasing and ergonomic pistol, and while it has some handling light wear it is still an impressive handgun. If you are a fan of German military arms and WWII history then this is the handgun for you. Good luck on your bid!