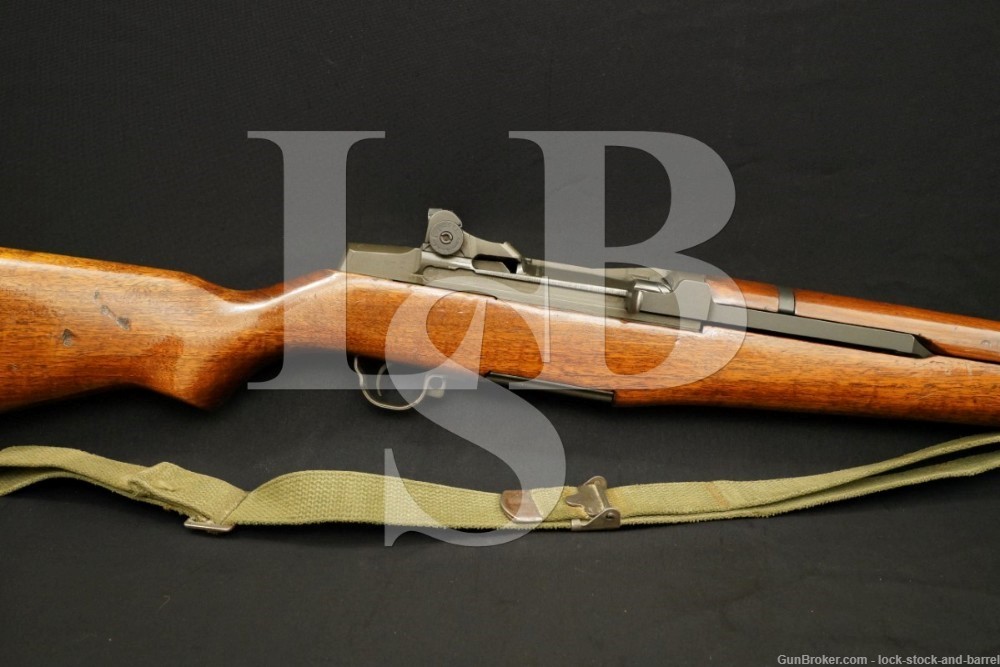 Stock Configuration & Condition: The face of the grip is marked with a “circled P” proof. The bottom of the grip is stamped with the last 4 digits of the serial number. The top front edges of the forearm are marked “1  67” and with the last 4 digits of the serial number. The interior of the handguard is painted with the last 4 digits of the serial number and stamped “34”.
The front handguard is glass bedded to the lower band and also secured to the band by 2 screws. This was done by Air Force Armorers during the conversion.
The hardwood stock has a pistol grip, metal nose caps, a stacking loop, two sling loops, and a metal buttplate with hinged door for storage in the butt. We found cleaning tools in the butt. The refinished buttplate has scratches and an area of surface erosion showing through the new finish. It shows light scrapes and discoloration. The stock shows numerous scrapes, scratches, and compression marks. Several have damaged small areas of the surface wood. These marks have been oiled. The LOP measures 13 inches from the front of the trigger to the back of the buttplate. The stock rates in about Very Good overall condition.

Overall Condition: This rifle retains about 90% of its metal finish. The metal shows scuffs and handling marks. The gas tube assembly and bottom of the trigger group also show scrapes. The bottom rear of the barrel has been polished clean of its finish. It shows a spot of pin prick surface erosion. The top front of the bolt was polished clean of its finish during the conversion. The bottom rear of the receiver shows light thinning and discoloration. The markings are deep. Overall, this rifle rates in about Very Good Plus to Fine condition.

Box, Paperwork & Accessories: The rifle comes with a green canvas sling. It shows soiling, discoloration, and a small amount of fraying on the canvas. It shows scrapes & discoloration from oxidation on the metal. It is in about Good condition.
Cleaning gear is stored in the butt. The gear includes a combination tool, plastic oiler, grease pot, chamber brush, and a 4 piece cleaning rod & loop. The combination tool shows scuffs and light scrapes. The grease pot & chamber brush show soiling and use. The combo tool, grease pot, and chamber brush are in Very Good Condition.
The oiler tube has 2 empty chambers. It shows light scrapes. It is in Very Good Plus to Fine condition. The cleaning rods are in Fine condition. The cleaning rods come in a green nylon pouch that shows soiling and is torn at the button. It is in Fair condition.

Our Assessment: The U.S. Rifle, Caliber .30, M1 is known affectionately as “the Garand” after its inventor, John Garand. The rifle would become the first standard-issue semi-automatic infantry rifle in the world. While some countries entered the war with limited issued semi-automatic rifles or developed such rifles during the war, America was the only nation to enter with its Army issuing autoloading rifles on a large scale. General Patton famously referred to the rifle as “the greatest battle implement ever devised”. Millions were produced during WWII and hundreds of thousands afterward, seeing use through the Korean War and into the Vietnam War. Interestingly, while many other weapons and military items would see production contracts sent out to otherwise non-related companies, during WWII production remained with Springfield Armory and Winchester. It was only after WWII that production would be contracted out to another gunmaker, Harrington & Richardson, as well as the agricultural equipment maker, International Harvester.
This Springfield Armory M1 Garand was originally made between 1955 and 1957. In January of 1967 it was converted to Air Force Premium Grade Match configuration at the USAF Competitive Weapons Shop in Texas. It uses all Springfield parts. This M1 Garand now has a National Match barrel, National match op rod, National Match gas cylinder and National Match sights installed. The bolt has been polished and the front handguard is bedded and screwed to the lower band. These modifications were made by Air Force Armorers. The rifle was refinished when it was converted so it looks great for its age. The rifle has a bright bore as well as nice markings on the metal. This Rare Air Force Premium Grade Match Rifle will add to your Garand collection and should do well out at the range.