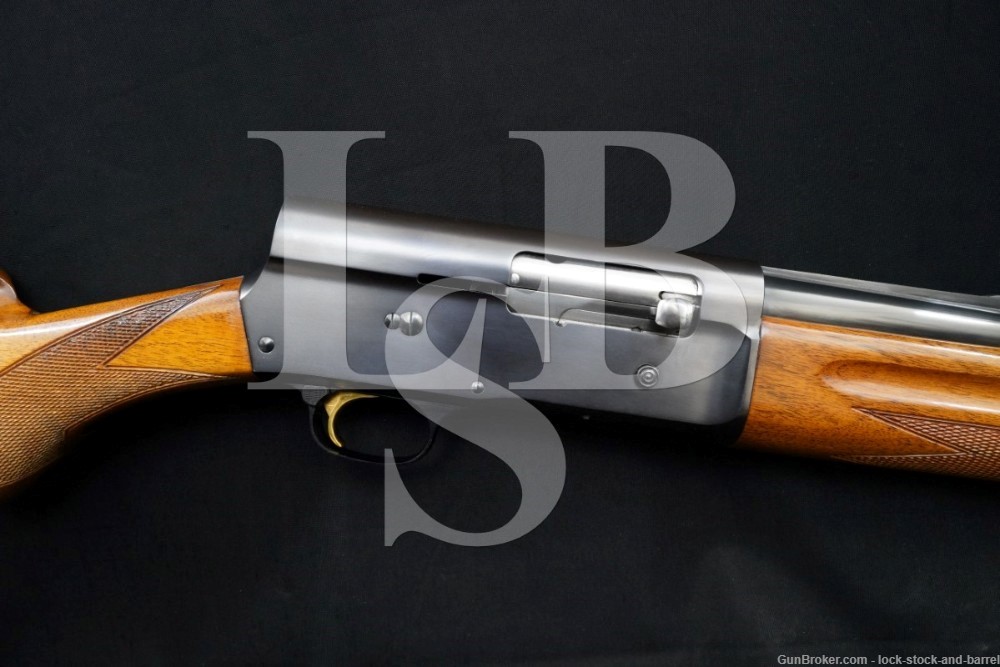 Sights / Optics: The front sight is a bright steel bead set on the rib at the muzzle. The top of the rib is finely checkered and the top of the receiver is serrated for glare reduction.

Stock Configuration & Condition: The stocks are two-piece checkered walnut with a finger groove forend, round bottom pistol grip, straight comb, and black plastic FN Browning buttplate. A sling swivel has been installed in the belly and there is another on the magazine tube cap. There are some light dings through the finish into the wood and some compressions, the most noticeable of these marks are on the right side of the buttstock sloping into the belly. There are a few little spots of finish loss. There are no chips or cracks. There are some draglines and light handling marks. The checkering is strong with light handling marks. The LOP measures 14 1/2” from the front of the trigger to the back of the buttplate. The plate has scattered wear mostly at the heel and toe. Overall, the stocks are in about Fine condition.

Bore Condition: The bore is mostly bright. There is some faint erosion in the bore near the muzzle.

Overall Condition: This shotgun retains about 98% of its metal finish. There are light handling marks, no major defects. The action shows operational wear. The screw heads are sharp. The markings are clear. Overall, this shotgun is in Excellent condition.

Mechanics: The action functions correctly. There is a magazine cutoff on the left front of the receiver, safety at the rear of the trigger guard, and a bolt release on the right side of the receiver. We have not fired this shotgun. As with all used firearms, a thorough cleaning may be necessary to meet your maintenance standards.

Our Assessment: The Browning Automatic 5, most often Auto-5 or simply A-5, is a recoil-operated semi-automatic shotgun designed by John Browning. The Browning Auto-5 was the first mass-produced semi-automatic shotgun. Designed by John Browning in 1898 and patented in 1900, it was produced continually for almost 100 years by several makers with production ending in 1998. It features a distinctive high rear end, earning it the nickname “Humpback”. Browning presented his design to Winchester, where he had sold his rifle designs, but they refused his terms. He then went to Remington, but the president of the company died while he was waiting to offer them the gun. Browning then took the gun to FN in Europe and was so confident of his design that his first order was for 10,000 shotguns. The design was later licensed to Remington for their Model 11 and to Savage Arms for their Models 720 and 755. This example was made somewhere between 1947 and 1968 and has a 27 1/2″ 12 gauge vent rib barrel choked Full. We think that it was made for the European market and not Browning U.S.A. due to the lack of scroll engraving and FN barrel markings. The gun has hardly any wear, and it is mostly just to the wood. This sharp shotgun will be a nice addition to your collection and certainly be up to the task of dropping birds or dusting clays. Please see our photos and good luck!