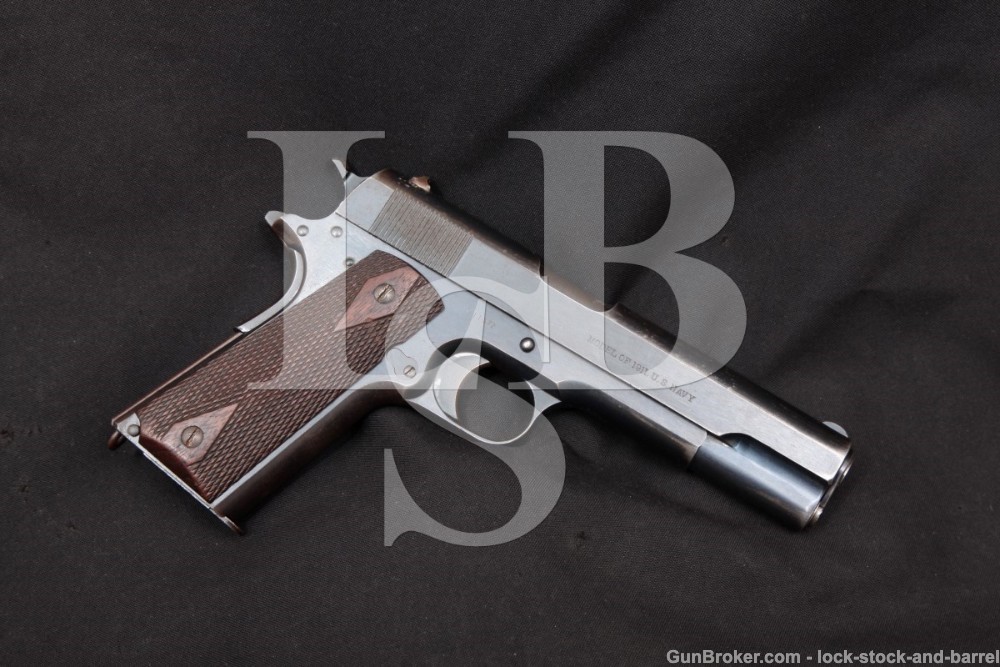 Sights / Optics: The front sight is a short rounded blade fixed to the front of the slide. The rear sight is a round-top “U” notch dovetailed into the slide.

Stock Configuration & Condition: The grips are checkered walnut with smooth diamonds around the grip screws and 14-15 checkers between the points of the diamonds. The relief at the bottom-rear of each panel for the mainspring housing pin fits very close to the edge of the pin. The grips have handling wear with some smoothed checkers, most notable at the bottom of the panels and with some scattered light compressions and scratches. There are light tool marks around the screw heads. There are no chips or cracks. The checkering is generally well defined. Overall, the grips are in about Very Good condition.

Finish Originality: Original to the parts, some parts are replaced (see Our Assessment).

Bore Condition: The lands are bright and the grooves are dark. The rifling is well defined. There is erosion throughout the grooves and some in the front of the chamber.

Overall Condition: This pistol retains about 80% of its metal finish. The finish is thinning at all edges. The slide has finish wear at the front on each side. The trigger guard has a patch of finish wear at the bottom-front on the left. There are several scattered light nicks and scratches with more notable wear under the slide stop. There is very minor surface oxidation scattered throughout with more notable oxidation in the frontstrap and mainspring housing. There is also light surface oxidation under the outside edges of the right grip panel with minor finish wear under each panel. The grip safety shows handling wear. The pistol has light-moderate operational wear. The screw heads range from tool marked with strong slots to disfigured with useable slots. The markings are clear. Overall, this pistol is in about Very Good condition.

Mechanics: The action functions correctly. The trigger pull is crisp and the slide has light play to the frame. We have not fired this pistol. As with all used firearms, a thorough cleaning may be necessary to meet your maintenance standards.

Box, Paperwork & Accessories: This pistol comes with one blued 7-round magazine marked “R” on the top lip of the floorplate. The magazine has light operational wear, scattered minor surface oxidation, intact feed lips and a strong spring, in about Very Good condition.

Our Assessment: The 1911 and 1911-A1 pistols served the military of the United States from 1911 to 1985, through two World Wars and the Korean and Vietnam wars. They gained a reputation as a reliable handgun with plenty of stopping power, and are held in high regard by those who have used them. Early production saw alternate shipments of pistols to the Army and Navy and this pistol was shipped in early November 1912 to the U.S. Navy Yard in Brooklyn, NY. It has a number of early features including its square-edge thumb safety, short spur hammer, long-leg guide rod, under-cut slide release and even a recoil spring plunger with no detent cut which is actually slightly earlier in production than this pistol’s serial number. The barrel is a replacement from either late in WWI or from the inter-war years and the magazine also appears to be a later addition to the gun. The pistol is in Very Good condition retaining about 80% of its blue finish with a decent bore and strong mechanics. All in all, it is a nice example of an early Navy Model 1911. This pistol is destined for a high-end Colt collection. Please see our photos and good luck!