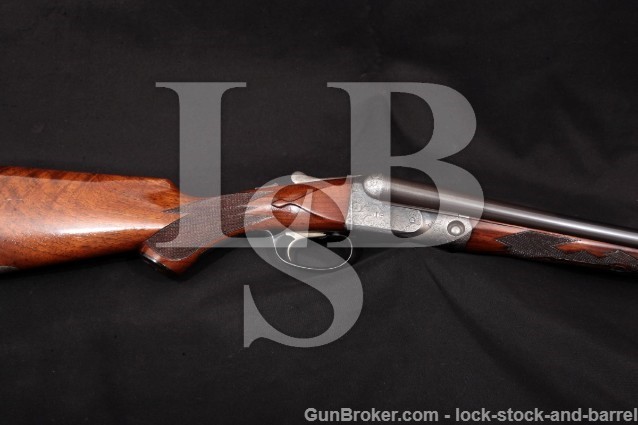 Action Type: Side by Side, Single Selective Trigger Shotgun with Ejectors

Markings: The barrel rib is marked “PARKER BROS. MAKERS. MERIDEN. CT. U.S.A. TITANIC STEEL”, with two arrows pointing toward the lettering. The underside of the barrel set flat is marked”T” in circle, “3”, “4” and “3” under the right barrel, a Maltese cross, “E” and another “E” under the left. Each barrel flat is marked “OVERLOAD / PARKER GUN WORKS / PROVED”. The underside of the lug is marked “16 / 1” and the left with “239720”. The top of the forend iron is marked “239720?. The bottom of the frame toward the front is marked “PARKER”. The water table is marked “PARKER BROS. / PAT’D OCT. 25. 1910.” on the right lug. The left lug is marked with “DH / 239720 / 3”. The lower tang is marked “239720” and the inside of the trigger plate has “9720” visible between the water table lugs. The left of the trigger is marked “9720” and “P” with another character we cannot make out. The receiver has decorative engraving with scroll engraving around a pointer scene on each side, border engraving on the fences, pheasant scene on the trigger plate. There is also decorative engraving on the exposed portion of the forend iron and latch and border engraving on the rear of the barrels. The initial plate in the belly is marked “Newton Chapin Jr.”.

Barrel Length: 26”, with solid, concave rib with wavy lines, which tapers from 0.513? at the breech to 0.278? at the muzzles. The wavy line engraving stops just short of the muzzle at a line across the rib at a scribed line. The barrels just meet at the muzzle.

Choke: The barrels are Full (L) and Improved Modified (R) choke, both fixed.

Sights / Optics: This shotgun is mounted with a silver-colored bead set into the front of the concave solid rib.

Stock Configuration & Condition: The stocks are a two piece checkered walnut set with splinter forend, capped pistol grip, and blued steel skeleton buttplate. The forend has a few scattered light compressions and a thin crack on the bottom at the iron which extends forward to but not into the checkering. The buttstock has several scattered light compressions, drag lines and scuffs, a tiny loss at the receiver on the bottom-right, a short thin crack at the rear of the top tang. The wrist checkering is well defined. The belly has an inset silver-colored plaque which is marked “Newton Chapin Jr.”. The skeleton buttplate has finish wear at the heel with scattered light marks in the sides and toe, in about Very Good condition. The checkering in the butt is well defined with only light wear and a few spots of residue in the checkers. Drop at comb is 1 1/2”, drop at heel is 2 5/8?, the cast is about neutral. The LOP measures 14 1/8? from the front of the trigger to the back of the buttplate. The stocks rate in about Very Good overall condition.

Overall Condition: This shotgun retains about 85% of its metal finish. The barrels have strong finish with only a few scattered light marks except at the chambers where there is light finish wear and a few spots of light surface oxidation. There are some nicks scattered along the edges of the rib. The wave pattern on the top rib stops a fraction of an inch from the muzzle at a scribed line and the barrels meet at the muzzle indicating that the barrels have not been cut (26? also matches the length listed for this serial number on P601 of “Parker Gun”, Price & Fjestad which also indicates that the ejectors and single trigger are original). The receiver has gone to gray toward the front with the case-color’s figuring visible below, behind and on the fences and in the unexposed portions such as under the lever, on the water-table and the top of the forend iron. The trigger guard has strong bluing with light handling wear in the bottom tang. The screw heads are sharp. The markings are clear with good detail on the engraving. Overall, this shotgun is in Very Good-plus condition.

Mechanics: The action functions correctly. The shotgun features factory single selective trigger and selective ejectors; the tang mounted safety returns to ‘safe’ when the action is opened. The shotgun has no play in the frame to barrel fit. The hammers fall with authority, the ejectors throw shells energetically and the triggers are crisp. We have not fired this shotgun. As with all used firearms, a thorough cleaning may be necessary to meet your maintenance standards.

Our Assessment: This Parker Brothers DHE Grade 3 Hammerless comes to us from 1936, after Remington assumed control of Parker but before operations were moved to Ilion, NY. The DH Grade was the first grade offered by Parker with their new black Titanic steel barrels and many buyers found the DH to be the ideal choice for a higher grade Parker, not thinking the difference in price between the DH, CH, and BH to be commensurate with the increase in embellishment. The grip cap is of the type used in 1936 and the skeleton buttplate was found on Grades 3 and higher. Despite its long and likely useful life, it has bores that look like they could be on a new-production gun and a lockup tighter than some new-production guns. This example has it’s original finish and lots of it with the correct barrel length and special features according to Parker’s records. The markings are still clear as day and the high condition will set  the Parker collectors drooling. This shotgun is a beauty and would make a great addition to any collection, especially an avid bird hunter or shotgun collector. Please see our photos and good luck!