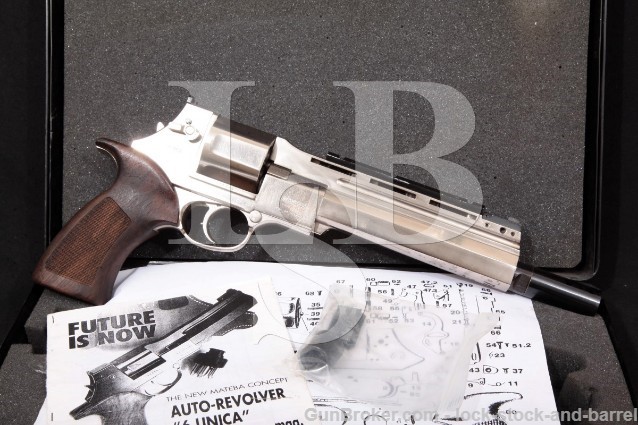 Sights / Optics: The front sight is a blade set in a base adjustable for windage and elevation pinned to the front of the barrel shroud. The rear sight is a square notch screwed to the rear of the frame. The top of the vent-rib has a 4 1/2″ optic rail installed, a 1 1/8″ optic rail is also included. Both show wear from previously installed optics. The mounting screws of the installed rail range from tool marked to disfigured and the rear two appear too disfigured and too tight for easy removal. We did not remove the installed rail to inspect underneath.

Stock Configuration & Condition: The grip is a one-piece checkered, oil-finished walnut with a high beavertail. The grips have no notable wear or damage, only light handling marks. There are no chips or cracks. The grips rate in about Excellent overall condition.

Mechanics: The action functions correctly. The single-action trigger pull has a smooth take-up followed by a crisp break. The double action trigger pull is smooth, but stacks with increasing tension before braking suddenly. The cylinder has almost no play in full lockup of all 6 chambers. This revolver is designed to have the barrel assembly and frame recoil back on the grip frame, cocking the hammer and turning the cylinder, but will also function as a traditional double/single action revolver. This revolver does have a trigger safety in the form of a sliding bar which stops the hammer from touching the firing pin if the trigger is not depressed. We did not fire this handgun. As with all used firearms, a thorough cleaning may be necessary to meet your maintenance requirements.

Box, Paperwork & Accessories: This revolver comes in a black plastic Mateba case with foam interior, thread protector and optic rail as described, hex wrench for the trigger’s over-travel adjustment screw, manual and parts list/diagram. The case has wear in the foam interior and a few scattered light scuffs on the exterior, in about Very Good-plus condition.

Our Assessment: Introduced in 1997, the Mateba 6 Unica Autorevolver looks like something out of a sci-fi movie, but actually borrows its design concept from the much older Webley-Fosbery automatic revolver. With the frame able to cycle against a recoil spring, sliding on rails on the grip frame, the force of the recoil is used to cock the hammer and advance the cylinder, creating something of a hybrid semi-automatic-revolver. The 6 Unica does have one significant design improvement, that being that it fires from the bottom chamber rather than the top, which puts the bore axis much lower. Between that and the recoil force which is used to operate the action, the felt recoil is significantly lessened when compared to other revolvers in the same chambering and mass. This example is the Hunter model with an 8 3/8″ barrel, it has a polished nickel finish, it is chambered for the .44 Magnum and the barrel is threaded with an installed compensator. While the action’s design makes it sensitive to the loading of the cartridge, it is also designed to function as a standard SA/DA revolver, allowing the use of less powerful cartridges which may not cycle the action automatically. This revolver is in about Excellent condition with 98% of its metal finish, nice grips and bore and strong mechanics. It comes in a Mateba plastic case and is ready for your next hunt, to turn heads at the range, or for display where its unique design and appearance would make it a favorite of nearly any colleciton. Please see our pictures and good luck!